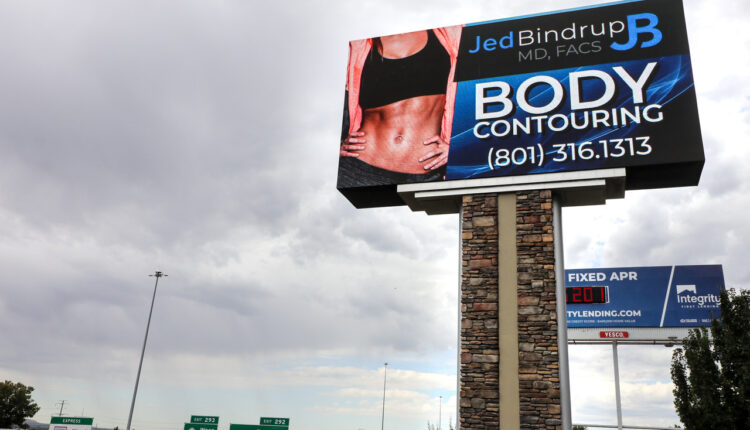 A billboard for body contouring services is displayed on the Utah interstate between Provo and Draper. Salt Lake City, Utah, has the second-highest number of plastic surgeons per capita. (Kaleigh Ma’ake)

Driving through Utah, it’s impossible to miss the billboards lining the freeway advertising cosmetic and plastic surgery. It may come as a shock to learn that Salt Lake City has the second-highest number of plastic surgeons per capita in America while being one of the most religious states in the country.

The American Society for Aesthetic Plastic Surgery reported in 2016, Americans spent 15 billion dollars on cosmetic procedures and nonsurgical aesthetic procedures. In a state where 87% of Utans identify as white and 57% as Mormon, you can’t help but question some sort of correlation between the two factors.

Whether it’s a trend or a way culture has told young women how they should look, it is definitely noticeable among women in Utah following perfectionist ideals.

BYU communications student Lindsey Harper, 23, can relate to many girls that have struggled with body image because she went through an identity crisis after receiving two plastic surgery procedures.

“Looking in the mirror and your face is different from the same face you’ve looked at everyday of your life … and ‘I looked better’ — it was an adjustment. I actually had a side profile, a jawline, and not a gummy smile,” Harper said. 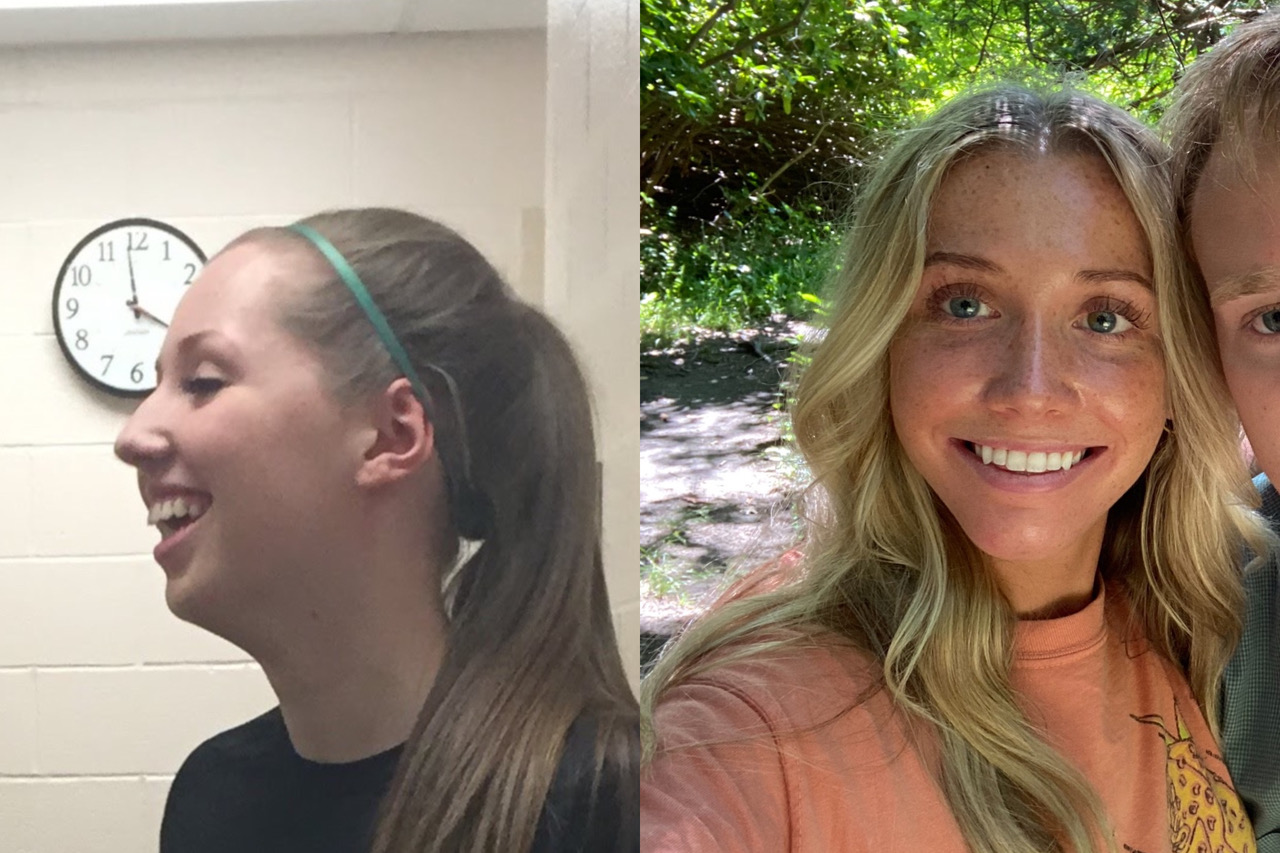 A before-and-after picture of Lindsey Harper receiving a rhinoplasty, or nose job, and jaw surgery to help her undeveloped jaw. Harper said her surgery was a blessing but also forced her to face hard truths. (Photo courtesy of Lindsey Harper)

In September 2018, Harper’s orthodontist recommended facial reconstruction surgery to help her undeveloped jaw. This procedure required breaking both jaw bones and cutting the majority of her chin to help reconstruct her face.

“It’s like the surgeon is looking at you and telling you everything wrong with your ‘gummy smile’ and saying, ‘I can fix it,'” Harper said. “I was overwhelmed but excited for the results.”

After the procedure, Harper missed two weeks of school, couldn’t talk for five days and lost about 15 pounds. She said her own teacher didn’t recognize her at first glance and how boys started noticing her more. Although it was a strange change for her, it helped her in ways more than people knew.

About six months later, Harper decided to get a nose job to get her deviated septum fixed so she could breathe more easily. Doctors told her she could only breathe 30% of the air because her septum was severely deviated.

“I considered the ‘why’ behind what I was doing, and as a cheaper option to get a nose job done too to change a minor insecurity, I decided to do it,” Harper said.

Although it was a minor physical change and was mostly intended just to help her breathe better, Harper said it made her feel prettier. Being recognized as ‘being prettier’ was a tough pill she had to swallow, and an acceptance she needed to realize was more than plastic surgery just fixing her problems.

Harper had an important conversation with a loved one post-surgery who helped her realized how God views his children.

“Would God want you to say those negative things to yourself about what you look like?” Harper asked, reflecting on the conversation. “God doesn’t love you because you’re pretty.”

There’s an unconscious and ingrained pressure created by society that women are valued for how they look. Body image is typically a term used to describe the positive or negative feelings and thoughts that you have about your body. This, in turn, has taught girls at a younger age to be more aware of their body and how they view themselves, especially with the constant reminder about television and social media influencers.

In Utah, there is a common “look” depicted by women. Some may say it’s collectively how the culture has defined beauty here. Here are a few comments made by women living in Utah about how they perceive the state’s body image culture:

“I feel like there’s an ideal look: the wavy hair, blonde, same haircut, spray tan, same clothing style. I’m not sure what it is specifically, but I think it’s a combination of a lot of things in the LDS bubble due to lack of diversity and just wanting to fit in,” Makana, 27, said.

“I literally never heard of young women getting Botox, boob jobs, lip filler, permanent makeup, regular professional facials and such unless they were celebrities. I thought those were only things that rich old ladies did, but after moving to Utah it felt like I was one of the only ones who didn’t do those things,” Olivia, 24, said.

“I feel like a lot of marketing in Utah expresses the ‘Utah look,’ so definitely variety in something as simple as models for retail stores would send a huge message because it seems like no matter what product is trying to be sold, every girl looks the same,” Zoe, 20, said.

The common take on the “Utah look” seems to set its own standard of beauty among Utah girls and women. With the mindset that everyone looks the same and to fit in you must reach a standard of beauty set by your environment, it’s become noticeable with money and resources you can alter your body to match what’s trending.

dr Elise Mecham is a local plastic and reconstructive surgeon native to Utah Valley, and the only woman plastic surgeon in this region. She said the perception of plastic surgery has drastically evolved. With her extensive background in cancer and trauma reconstruction, cosmetic surgery, burn/wound healing and body contouring, she has truly seen it all.

During the past few years with the economy trending downward and a worldwide pandemic, there has been a surge of uncertainty for the future that has greatly affected many lives, Mecham explained. 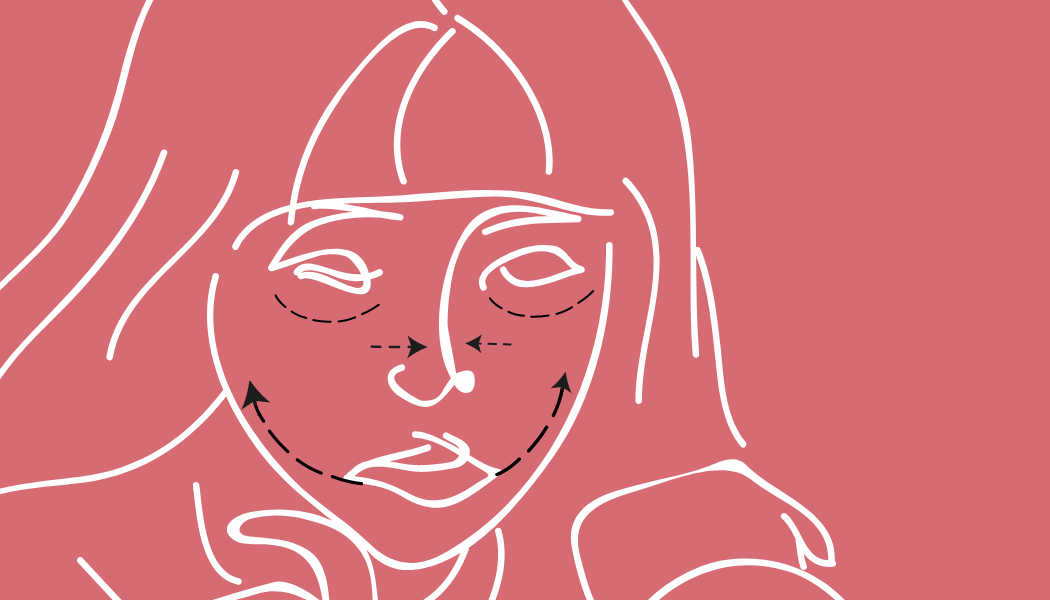 An illustration shows some changes that could be made using plastic surgery. (Created by Kaleigh Ma’ake)

“Women all of a sudden think that they need to look better to attract a mate or my husband who isn’t doing his job and rebound, whatever it is, ‘I need to look my best,'” Dr. Mecham said. “They might not realize that’s why they are doing this, but it’s a direct correlation that you see a lot of these non-invasive procedures going up around this time when people feel uncertain about the future.”

As of this year, Utah is also known to be the youngest state with a median age of 30.7 years and one of the highest birth rates in the country at 14.9 births per 1,000 population, according to the Worldwide Population Review. As marriage is an important aspect in The Church of Jesus Christ of Latter-day Saints, which is centered around Utah, younger couples are seen to start families younger than the national average.

As part of the natural process of having children comes with drastic changes to the female body, the “mommy makeover” has evolved to restore the body to its youthful, pre-pregnancy look. This could include a tummy tuck, liposuction and a breast reduction or lift.

“For a lot of these women, it’s not necessarily an extrinsic pressure, it’s an intrinsic desire to have their bodies match how they feel, which is much more youthful than what they appear,” Dr. Mecham said. “They undergo these procedures and try to allow that mental idea of ​​how they feel match to their physical appearance.”