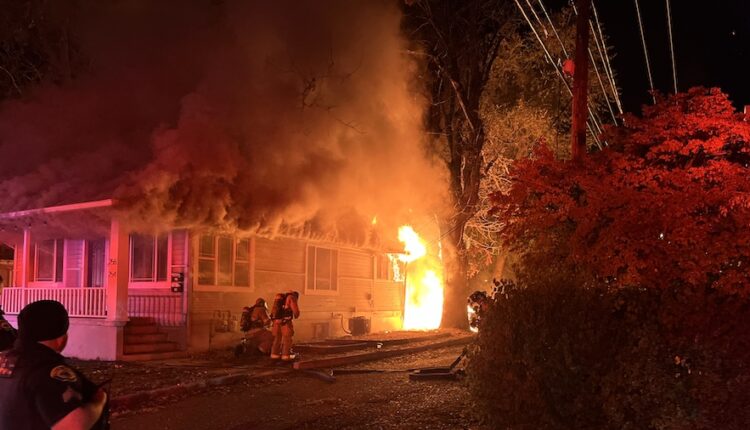 PROVO, Utah — It was a busy night for firefighters across the Wasatch Front as crews responded to fires at homes in Salt Lake City and Provo, along with a third blaze in Santaquin.

Battalion Chief Tommy Torgersen with Provo Fire & Rescue said four to six people were displaced after a fire broke out in a home Tuesday morning.

Crews responded to the home near 200 North and 800 East at approximately 4 am Thursday. Torgersen said he arrived and found heavy fire coming from the back side of the home.

Now @provofire says 4 to 6 people displaced in this fire in #Provo pic.twitter.com/HZnrQlhAP3

A witness told KSL TV’s Karah Brackin that he saw flames coming from an electrical box and Torgersen confirmed the fire is under investigation.

Initial 911 calls indicated people might have been trapped in the home, but no injuries were reported after firefighters searched the structure.

“At that time we moved to completely offensive operations to extinguish the fire,” Torgersen said.

A porch area and car are total losses while a kitchen area in the back of the home suffered heavy damage.

Fire crews responded to an RV fire that quickly spread into a home and nearby apartment building Thursday morning.

Battalion Chief Ty Shepherd with the Salt Lake City Fire Department said crews arrived and found the RV fully engulfed in flames. They quickly attacked and extinguished the mobile home before addressing the exposure to the other structures.

No injuries were reported but Shepherd said a few residents have been displaced. Crews will remain on scene until the fire has been completely extinguished and to assess damages.

The fire is under investigation.

A KSL TV viewer sent in a photo of emergency crews responding to a house fire early Thursday morning. We have reached out to firefighters and will update this story once we receive more information.