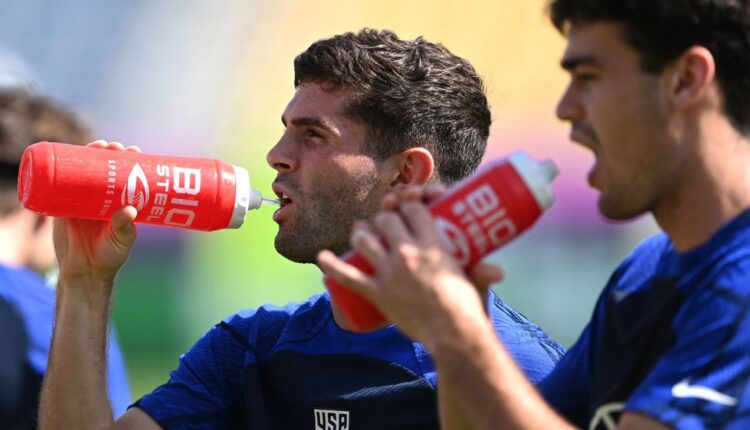 Qatar 2022 is going to be unlike any previous World Cup. Even though it will be the first World Cup played in a northern hemisphere winter of November and December, due to the searing heat in the Persian Gulf during the tournament’s usual slot of June and July, the matchday temperatures experienced by players and supporters will still be Consistently hotter than ever before.

Fixtures staged in the afternoon in Qatar are expected to be played with temperatures around 91-93 degrees Fahrenheit (33-34 degrees Celsius), while even those that kick off at 10 pm local time are likely to be played at around 79 F (26 C) and humidity above 60%.

There have been high temperatures at previous World Cups, of course. At Brazil 2014, the United States played Portugal in an evening game in Manaus at 84 F (29 C) and 70% humidity, while the USA ’94 clash between Mexico and Republic of Ireland in Orlando kicked off at midday when the pitch temperature was 120F (48C). It was so hot that day that the Irish players wore white baseball caps during the prematch national anthems in an attempt to minimize the effects of the punishing Florida sun.

But those games were just examples of the extremes. In Qatar, it is going to be hot and oppressive at every game, although the much-heralded air conditioning inside the stadiums could have a positive effect for spectators and players.

So what are the physical challenges going to be like for those players who are heading into the biggest tournament of their lives? How hard will it be to perform to their best in such high temperatures?

Last month, ESPN was invited to experience some of the physical and psychological stresses that players will have to endure in Qatar during a session at the Porsche Human Performance Center at the Silverstone Grand Prix circuit in England. With the insight of Precision Fuel & Hydration, a sports science company working with one of the European teams competing in Qatar, I had to go through a 45-minute workout on a treadmill in a heat chamber in conditions replicating those that the players will have to overcome at the World Cup.

The object of the exercise was to highlight the physiological response to the physical activity, endurance and heat, and how they combined to affect my heart rate, core temperature and RPE (Rate of Perceived Exertion.) As well as assessing my fluid levels and a post-workout sweat test to measure the level of salt in my blood.

And it was tough. Now I am a 40-something sports reporter who does maybe a couple of gym sessions a week and spends too much time sat down in a car or at my desk, so I am hardly the kind of physical specimen that you will see pushing the boundaries in Qatar. But even for elite footballers, the conditions will test their fitness and levels of preparation.

“The conditions in Qatar for the group stage are forecast to be over 30 C (86 F) and about 60% humidity, so it is on the hotter side of what players in northern Europe normally experience at this time of year,” Jack Wilson , lead sports scientist at the Porsche Human Performance Center told ESPN. “That is pretty much the sort of temperatures you were exposed to in the heat chamber, which gives you a good comparison of what it will be like.

“But if you are going to be competing at 30 C (86 F), what impact is that going to have? Basically, the players will be trying to optimize their physical and mental performance in spite of environmental conditions that are a lot more challenging than what they typically experience, especially at this time of year.And as we saw from your heat session data, one of the threats to optimal physical and mental performance will be that extra burden that’s placed on your cardiovascular system — your heart, your lungs, your circulatory systems — when you exercise in the heat.”

The writer as he continues the intensive tests in a heat chamber simulating the climate facing players at the World Cup. Courtesy of Mark Ogden/ESPN

But the heat was constant and inescapable, weighing down heavier with every minute, and once the speed was increased to 6.2 mph in 25 minutes, the numbers began to spike fairly quickly in all categories. And I was drinking more too.

From 25 mins to 45 mins, my core temperature climbed from 99.3 F/37.4 C to 100.9 F/38.3 C while my heart rate jumped from 159 bpm to a peak of 174 bpm — above my recommended maximum of 172 bpm. RPE went from a comfortable three to the maximum of six. (The harder the exertion, the greater the strain on the body.) And during the final five minutes, I began to experience a headache due to the stresses on my body — dehydration and increased heart rate combining to make me struggle not just physically , but also in terms of concentration and motivation.

Put it this way, if I was a footballer playing out the closing stages of a game in that kind of physical condition, you wouldn’t want me having to concentrate on marking an opponent at a set-piece or taking a crucial penalty.

“If you’re active at 30 C (86 F) and you start to generate heat when you’re exercising, you can’t offload it as efficiently, so your core body temperature rises faster at a greater degree and there are a number of downstream effects of that that makes exercise more challenging,” Wilson said. “One will be those rises in heart rate and cardiovascular demands and that comes as a result of your cardiovascular systems having to supply blood to your working muscles to aid with nutrients and oxygen supply.

“But in the heat, your body also has to divert a lot of blood to the periphery, to your skin, to aid in sweat loss because that’s the main means by which we cool ourselves down in the heat. So you have these two very large areas of the body competing for blood supply which causes your heart rate to increase relative to what you’d expect it in the UK temperature.

“If you have data from the Premier League matches over the past week and compare that to the heart rate of players out in Qatar, you’d expect their heart rate to be much higher as a result of the heat stresses they’ll be exposed to and that in itself makes exercise feel a lot harder.”

To keep me hydrated in the heat chamber, I consumed 774 milliliters (26.1 oz) of fluid, but shed 1.274 ml (43.1 oz) of sweat — a fluid deficit of 500 ml (17 oz.) A post-exercise sweat test showed that I had lost 512 milligrams (0.02 oz) of sodium per liter of sweat, so the importance of replacing both fluid and salt is clear. While hydration is a key element of every athlete’s preparation and participation, salt levels are also hugely important — sodium helps regulate muscle contraction, nerve function and blood volume, and maintains fluid balance and cognitive function.

So next time you see footballers taking on fluids during a drinks break, it definitely won’t be just water that they are drinking. Hydration is now so important that every player will have a bespoke drink waiting for them on the touchline following the kind of testing I experienced during and after my heat chamber workout.

“We’ve had international teams competing in Qatar that have approached us for help to individualize their players’ hydration strategies,” Chris Harris of Precision Fuel & Hydration told ESPN. “We have done sweat tests and provided individual sodium concentrations. The individual sweat rates help the team build a catalog of results and tests for each player so that they can refine and dial in a hydration strategy for before, during, and after games for individual players rather than doing it on just a group basis.

“A drink bottle will be designed for every different player. There could be a scenario where two or three players have very similar hydration strategies and therefore they might well be on a similar intake, a similar amount of fluid, a similar amount of electrolytes, but that comes down to individual testing and making sure they have sort of done all the correct tests before heading out to these hot conditions so they can prepare themselves as best as they can.”

Hydration and sodium levels are only part of the package, however. Recovery periods, including sleep patterns, and nutrition are also key elements of a player’s preparation, but ensuring that a player is taking on the correct fluids is all part of the jigsaw when conditions are as hot as they will be in Qatar.

“It’s all about trying to optimize the player’s performance,” Harris said. “The hydration status of a player isn’t going to make them play better, but it will likely prevent them from declining in performance throughout a game. While it was typically expected that towards the latter part of the game, players would get fatigued, suffer muscle cramps and headaches and have to be substituted, the development of hydration and fueling should help debunk the myth that players can’t perform at high intensity for long periods of time.”

Ultimately, the modern footballer is much fitter and better prepared than their contemporaries from as little as 20 years ago. Sports science is now a crucial element of every team at the top level and while planning for this World Cup may have gone unseen, it will have been ongoing for months and even years.

“The fitness levels of modern players will set them in good stead for coping with the heat,” sports scientist Wilson said. “If you went back 20-30 years and stuck a footballer into a World Cup scenario in Qatar, they would find it a lot harder given the greater levels of fitness now for modern day footballers thanks to all sorts of sports scientists involved and the advancement Sense of training techniques and knowledge But those teams that are not heat acclimated, like those from northern Europe where you don’t see those Qatari conditions, will be at a disadvantage, for sure.

“The more time you spend in hot environments, the better your body adapts to be able to manage heat stress, which is why players like those from the UK, who aren’t used to those hot conditions, will be at a disadvantage.”

“If they had a month to prepare for the World Cup, they could use an environmental chamber, get acclimated and then fly out to Qatar. There’s a difference there. But most teams are going from club football in cool conditions in November to a hot World Cup, so it’s going to be very challenging for lots of players.”