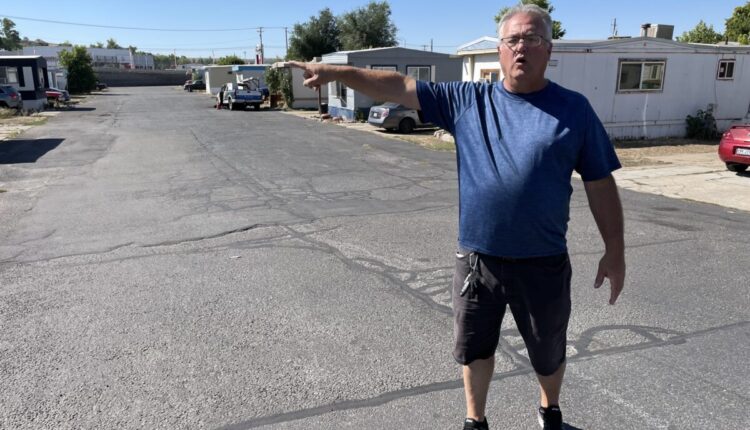 Jason Williams, a resident of Lesley’s Mobile Home Park in Riverdale, speaks at the park on Sept. 6, 2022. Twelve residents, though not Williams, face eviction.

The outside of a camper at Lesley’s Mobile Home Park, photographed Sept. 6, 2022. Twelve residents in the park face eviction.

Jason Williams, a resident of Lesley’s Mobile Home Park in Riverdale, speaks at the park on Sept. 6, 2022. Twelve residents, though not Williams, face eviction.

The outside of a camper at Lesley’s Mobile Home Park, photographed Sept. 6, 2022. Twelve residents in the park face eviction.

RIVERDALE — Twelve tenants of Lesley’s Mobile Home Park face eviction as the operators of the facility push to start emptying the property months ahead of a May 31, 2023, deadline set in a notice sent to park residents in late August.

“Everybody’s freaking out, the people who got served,” said Jason Williams, a Lesley’s resident who has been trying to help some of the people facing immediate eviction. Mountain States Eviction Law Firm of Layton filed 12 cases last week in 2nd District Court in Ogden seeking the eviction of residents in 12 different units at Lesley’s, 11 of them for nonpayment of rent and one for squatting.

Neither officials from Mountain States nor H&H 39th Street, which plans to redevelop the land where Lesley’s sits, immediately responded to queries seeking comment. Riverdale officials last July rezoned the 4.62-acre parcel where Lesley’s sits, enabling multifamily development on the land, which allows for apartments, townhomes and patio homes.

“I’m pretty nervous,” said one of the tenants facing eviction, who ask that he be identified only as Jay.

He’s living in a towable trailer at Lesley’s and said if forced, he might take the trailer somewhere in the mountains to live. Williams, who is up to date on his rent and wasn’t among those receiving eviction notices, has been trying to help find housing for Jay. However, because the man hasn’t paid rent in recent months, he’d likely be turned down by low-income housing providers.

“We fought for this country, we fought for freedom,” said Jay, a military veteran. “This is taking our freedom and throwing it out the door.”

Because the cost of living in mobile home parks is generally lower than in homes or apartments, they can be an affordable option for lower-income people. But because the land on which the mobile homes sit is typically owned by park operators, tenants don’t have rights to the property and can find themselves in a lurch when the land owner decides to go in a new direction.

Reps from H&H, which owns the Lesley’s property, have been publicly talking about redeveloping the land into apartments or other housing since last year. The Riverdale City Council acceded to H&H’s request for a rezone of the property in July, paving the way for change.

Audrey Robbinson, another Lesley’s resident, hadn’t received an eviction notice but said she was being forced to leave because she’s subleasing the land where her trailer sits from her sister, the actual leaseholder, apparently a no-no. She’s lived there three years and wasn’t sure what she was going to do.

“I was just expecting the nine months,” Robbinson said. An Aug. 30 notice sent by Lesley’s reps to residents in the wake of the July rezone gave them nine months to vacate the mobile home park, until May 31 next year.

According to the eviction notices filed in 2nd District Court, 11 of the impacted tenants owe unpaid rent ranging from around $1,600 to $12,000, which led to the legal action. Lesley’s charges that another tenant is living in a unit without a lease, squatting, while proceedings are being dismissed against a 13th tenant.

Each of the 12 still facing action received notices from the Mountain States law firm to address the issues within five days of the notices or leave. One responded in court, saying the eviction action was improper because the tenant never received notice of a rent increase several months back. Another accused of squatting said they in fact have a lease and asked that the case be dismissed.

The other 10 did not respond, potentially putting them at risk of facing a default judgment.

Williams worries about the tenants facing eviction due to nonpayment of rent, saying they’d likely have a hard time finding a new place to live because of that history. “So they’re homeless,” he said.

U of U student claims being drugged, sexually assaulted at fraternity