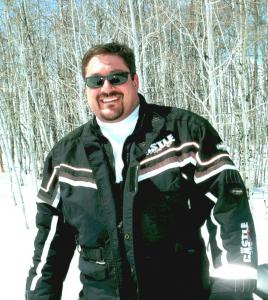 Rob Lucero was my cousin, but was more like a brother to me. I am a couple of years older but that never seemed to matter.
Growing up, and later on, here are some of the things I remember about him.

When I lived in Ogden as a boy we used to spend hours in my backyard practicing soccer. The yard was rather small, but so were we.
We would use the clothes line posts as goals and would practice driving the ball across the lawn and scoring on each other.
I would get tired but Rob always insisted on playing on, he was a forward on his team while playing with the AYSO, American Youth Soccer Organization and was very competitive.

After watching the movie Rocky, we setup a work out room in my basement and pumped weights, they were the old plastic / cement variety but worked fine for us.
We even drink a raw egg a couple of times for the full effect. We were in pretty good shape for only being young boys.
We both went to TO Smith elementary school for a while and had some of the same teachers. Rob competed in the one vs one basketball tournament and finished pretty high on the list.
We would often walk to my house after school to watch Star Trek and would see who could chug a can of Country Time lemonade the fastest.
Also spent a lot of time going to the old Deseret Gym and hanging out at the Mine Shaft arcade at Ogden Mall during this period.

Spending summer days at the pool at the Versailles apartments, where my Grandpa Perkes was a property manager, was a favorite pastime.
The Perkes family would spend hours in the pool, and had many an event at the apartments. We became great swimmers and divers, even though we were always told to keep the noise down so as to not bother the residents of the apartments.
It was our home away from home and our grandparents loved us all dearly and would let us run around and play in all the different rooms that my grandpa had created and combined when building the apartment complex.
We would often play hide and seek, get into all of Grandpa’s stuff in his workshop and steal from his Twinkie stash above the fridge.

There were a few times when we went out on his Dads boat at Pine View reservoir. Tom would let me water ski for my first time, and Rob was envious that I got to go first.
I managed to get up a couple of times and ski around for a while, something I will never forget. It was the start of a love for going boating with the Lucero family that would carry on as time went past.
Something else I remember was driving around in some of his uncles muscle cars and specifically his dads red 1956 Chevy Bell Air.

I later moved away to California and separated our paths as we went on to junior high and high school.
I would come back to Utah every summer to visit and attend the family reunion at the Logan cabin.
Robby was always there for me as if I had never left. He shared all the things he was doing in high school, playing sports and telling me about the different people and things that were going on in his life.
I was often included in going out with his friends, driving around with girls and hanging out with people I didn’t even know as if we were all great friends, and we were because of Rob.
Rob got the 56 Chevy from his dad by then and I remember cruising with him on Washington Boulevard a few times.
We were so cool and got so many looks from everyone, probably because that Chevy had been cruising for so many years already and was well known.

When Rob graduated from high school in 1989 he decided to come out to San Jose California to stay with me for a while. I had taken the Amtrak train to Utah and we later drove the 56 back across the Nevada desert and into the bay area.
He stayed with us for a couple of weeks hanging out, and even mistakenly ended up in a car show when he and my mom went for a drive to Santa Cruz. He and the 56 Chevy fit right in and became part of the show.
One day I came home from school and he was gone. I was pretty disturbed that he had left without saying goodbye. He called me the next day and said he had to leave because he had to get home in a hurry.
I was unaware of the situation, but it made more sense that he had come to California at the time to get away. I was amazed that he had got home so almost, doing an 11+ hour drive in only around nine hours.
He said he put the pedal to the metal and drove as fast as he could through the night to be there with Stephanie, and they had been blessed with a baby girl that next day.
Later I would find out the baby had been adopted and I knew that had a big effect on him, but it was out of his control at the time.

Life went on for both of us. We continued to have good times together and stayed close over the years.
He got married to Stephanie and they were blessed with another baby girl named Savannah, who was the love of his life.
I later moved back to Utah and became closer to my family. I would often hang out at Rob’s place and watch as he would play with Savannah all the time, lifting her over his shoulder and calling her a sack of potatoes.

I started working again after taking a year off, was commuting back to California on the weekends, got married and had a beautiful daughter of my own. Rob was my Best Man and the Godfather of my sweet Hannah.
Things changed over the years as they do, we got older, kids are growing up and time started going by faster and faster as we went on with our lives.
One day Rob called me and said his first daughter Kelsee had come back into his life. I could tell how much it meant to him and how excited he was to have her back and find out everything he could about her.
It wasn’t long before she was part of the family again and he treated her as if she had been there all along.

Over the years I would often go boating with Rob, his brother Ben, family and friends, and came to love going to Flaming Gorge on our adventures.
Boating was the place we could escape from our daily routines and forget the rest of the world for a while.
Rob had taken to going boating almost every week after the pandemic had set in and had changed our lives. It was on one of these trips that just the two of us spent a couple of days and nights hanging out.
We arrived late in the evening on the first day, settled on the dock that overlooks the main part of the colorful Flaming Gorge wall and watched a beautiful sunset over the water and horizon.
We had eaten dinner and were sitting on the dock in our chairs talking and looking up at the night sky. We started to see a shooting star here and there, and before long were witnessing a full meteor shower right over our heads.
We must have seen at least a hundred shooting stars that night. We had unknowingly caught the Perseid meteor shower during its peak in August, in one of the most beautiful and perfect places we could have been.
It’sa night I will always cherish and am so lucky to have experienced it with Rob.

My cousin was like a shooting star. Burning brightly for all to see, admire and love before going back into the cosmos from where he had come.
A part of Rob’s energy and spirit will always be within my heart and I look forward to seeing him again one day when our paths intertwine again in our next lives.