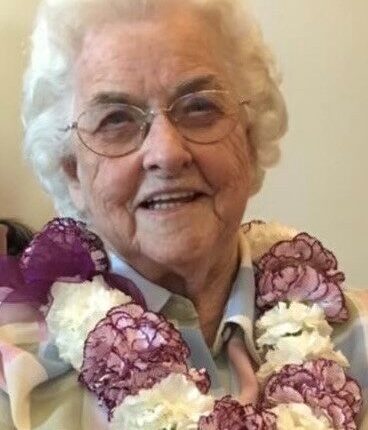 Ruth Call Cornelius joyfully joined her loved ones who have gone before on April 6, 2022. She was born on Dec. 5, 1922, in Salt Lake City, Utah, to Harold Call and Beatrice Alice Patterson Call.

Most of her youth was spent in Sparks, Nevada, where she enjoyed an active and happy childhood. She enjoyed music as a child and sang beautifully. When she was twelve, her glee club traveled to the Salt Lake Tabernacle and Ruth was featured with a solo, “Ciribiribin.” She also loved sports and lettered in all girls’ sports including badminton, volleyball, ring tennis, basketball, and softball. She graduated from Sparks High School in 1941.

She was working in the First National Bank in Reno when she met her husband-to-be, Russell B. Cornelius. They were sealed together on January 7, 1943, in the St. George Temple. They lived in Virgin, Utah, Logan, Utah, Ogden, Utah, and La Verkin, Utah, before moving to Antioch, California, where Russell taught school for 30 years.

She enjoyed many callings in the Church of Jesus Christ of Latter-day Saints, including Relief Society Counselor, Relief Society President, Young Women’s Mutual Improvement Association President, Primary Secretary, Sunday School Teacher, Ward Camp Director, and Stake Camp Director. She served in camp for fifteen years which was the love of her life. She also served a stake mission with her husband, learned the missionary discussions, and baptized two new members.

She and Russell were key players in several fund-raising projects, including Mr. and Mrs. Snowmen, and thousands of the famous resin grapes.

They moved back to Virgin after Russell retired, they spent some of their happiest years reuniting with former friends and loved ones. After Russell passed away in 1997, she eventually moved to Kaysville with her son, Russell K. She was then called to serve a mission in Georgia, catching up on records in the mission office. She also lived several years with her son, Steve, before moving to St. George with her daughter, Shauna.

She became interested in quilting, thanks to a visiting teacher and faithful friend, Maxine Christensen. While in Kaysville, she produced some ninety quilts, winning blue ribbons at both the Davis County and Utah state fairs. Some of her quilts are on display in the foyer. She also produced countless beaded temples, thanks to the involvement of her Niece, Anne Berneker. She donated some of these creations to primaries and young women groups in various locations, including the Sunset 1st Ward.

Ruth had a talent for endearing people to her and for serving them in many ways. In addition to the love she has for her children and extended family, she is “mom” and “grandma” to several of her nieces, nephews, and honorary grandkids, and has become attached to several of her care workers. She has an abiding testimony of the Gospel and strong faith in the Lord Jesus Christ.

Ruth and her family are very appreciative of those who cared for her, the amazing hospital staff, nurses, and doctors, with special acknowledgment extended to Lena Warren, loving caregiver, and Nancy Welti Sanchez, physical therapist, and loving friend.

Arrangements are made under the direction of Spilsbury Mortuary, 110 S. Bluff St., St. George, Utah, 435-673-2454. Friends and family are invited to sign Ruth’s online guest book at www.spilsburymortuary.com.