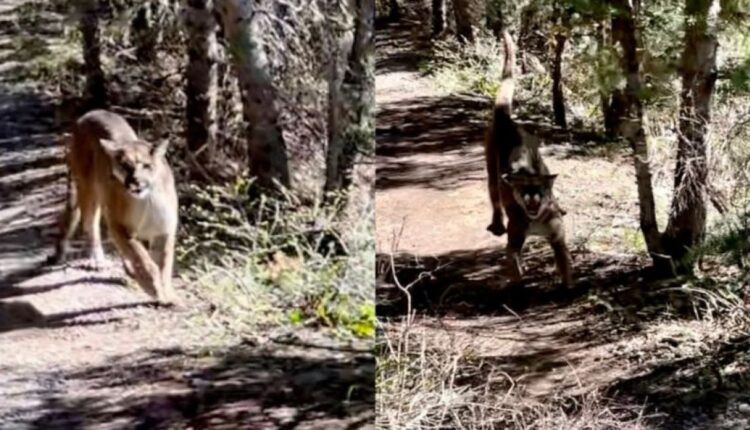 Salt Lake City man was stalked by a cougar during hike, video shows

SALT LAKE CITY – A Salt Lake City man got up close and personal with a puma on Thursday night as he hiked through Big Cottonwood Canyon, just outside of town.

Jared Smith said he was on his way through the Broads Fork Trail when the cougar suddenly appeared and followed him within 20 to 30 feet.

“I was running back my way and was probably about a mile from returning to the parking lot when I heard something beside the path,” said Smith. “And there was a cougar, oh, probably 15-20 feet from me. Definitely scared me.”

Taking the advice of wildlife experts, Smith said he acted calmly while retreating, trying to look “bigger”. Despite his actions, the puma continued to follow him.

“Periodically the cougar would throw itself, baring its teeth, kicking its legs and tail up, almost like a little sprint straight at me,” said Smith. “If you watch the whole video, you can see my voice crack at these points because it scared me.”

In the video, Smith repeatedly said to the cougar, “I’m going away, I promise. I won’t bother you,” as it followed and hissed at him.

Smith wrote about the incident on Facebook, saying he thought the beast’s cubs were nearby.

“To be honest, the most important thing to me is my family. I have a wife and a child and (I) thought I had to make sure I could get home,” said Smith. “I know cougar attacks are very rare, but I think she probably protected her cubs in that situation, so I know they will do almost anything to protect their cubs.”

After about five minutes, Smith said the Puma had left the lane and could safely return to its vehicle.

“It was about five minutes after the encounter when she was about to turn the edge of the path and I pulled back a minute or two and kept talking because I couldn’t see where she was going,” he said. “After a few minutes, when I felt that she was no longer around, I ran down the path and tried to distance myself as much as possible.”

Smith wrote in a Facebook post that he’s a little unsettled about the encounter, but otherwise he’s fine.

“That definitely shook me more than the hundreds of hours I spent hiking and climbing and other outdoor experiences just because it’s so tedious,” he said.

Although unsettled, he says the encounter won’t prevent him from hitting the trails again anytime soon.

“It will definitely take me a few days to process this before I come back, but I love it too much,” he said. “I realize this is really unusual. It’s not something that is likely to happen repeatedly. I’ll be back on the trail soon.”

The Utah Division of Wildlife Resources recommends that if hikers encounter a cougar, they shouldn’t run but look intimidating by making eye contact, appearing taller, and speaking loudly and firmly. If the puma attacks, experts recommend protecting your head and neck.

This story was originally published by Melanie Porter at Scripps Station KSTU in Salt Lake City.

Group against school masks ending accuse Cox of catering to ‘the worst people’.