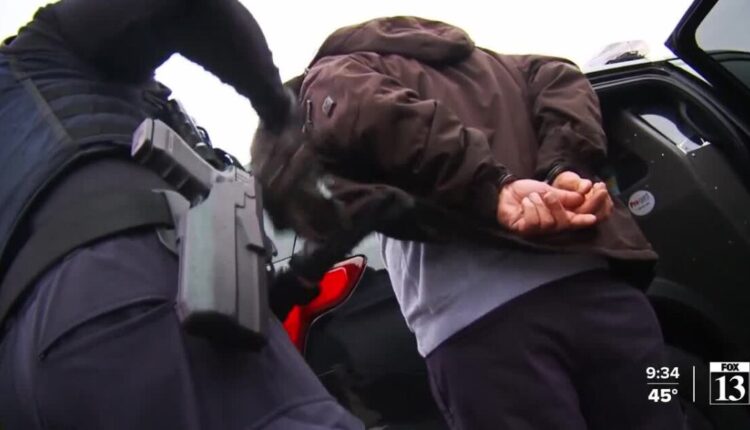 SALT LAKE CITY – The west side of Salt Lake City has been hit by an onslaught of criminal behavior.

Criminal activity has been spreading into the area in areas along the North Temple and problems have been going on for more than a decade.

FOX 13 has extensively covered topics that have impacted the area such as Operation Rio Grande, crime issues, murders, and everything in between. There have also been attempts to combat crime in the area with the introduction of downtown ambassadors and other initiatives.

On the same day, Police Chief Mike Brown said, “Make no mistake if you’re a robbery, if you’re down here selling drugs in our community … they will find you and arrest you.”

The police and the city promised a solution that day, and now the area has improved a lot, according to the people who live there.

“A lot, at least today, it’s a lot cleaner, even with the TRAX everything,” said Alex Serrano. Serrano worked for 17 years running a North Temple restaurant and has just opened one of his own called LOVE NT Coffee.

“Working here all these years – that’s close to my heart,” he said.

FOX 13 had previously spoken to him about the new store that had just opened after the previous tenant moved out of the area for crime.

Fair Park Community Council Chairman Nigel Swaby is a person involved in the revitalization of the area.

“I’ve always seen the North Temple as the gateway to Salt Lake City. If you are coming from the airport with TRAX, you will come in from I-80, this is the neighborhood you are going through, ”said Swaby.

Despite the efforts of many programs and promises by elected leaders, crime in this area is still widespread.

The problems are now in the hands of the Salt Lake City Police Department. On October 19, FOX 13 had an exclusive firsthand look at one of the undercover operations they are conducting to fight crime in the area.

“We have officers who dress up decently and go into these worrying areas,” said Sgt. Mark Wian of the Salt Lake City Police Department.

Officials target drug dealers by dressing in civilian clothes and approaching people along the North Temple to buy drugs.

As soon as this officer has given a signal, marked units waiting around the corner move in and take the traders into custody.

The police target the dealers, but stay away from users.

“Why is it important to undress the dealers, you hit it on the head when you ask me the question,” said Wian. “Addiction is a disease with something that doesn’t help.”

Five minutes into the operation, police found two dealers, made a deal in Madsen Park, and the officers moved in on their signal. In just two hours, officers arrested five drug dealers and found needles full of drugs, pipes, money and drug paraphernalia.

Also during the operation, at a tense moment for the police, a wanted sex offender was arrested with an arrest warrant after a chase.

“We know of people who are wanted for a variety of things, such as the person who did not abide by the requirements of a registered sex offender and became non-compliant,” said Sgt. Said Mark Wian. “We have to be careful not to focus on one thing like that because there are so many other things out here that can alert us to criminal activity.”

Although the job can be dangerous, Wian said it was all to try to make the community a little safer.

“The best part about these operations is identifying the traders who are detecting this criminal activity and holding them accountable,” said Wian.

These operations are for those like Alex Serrano, who shared his vision of the future of the North Temple with FOX 13 and said, “I want to make sure that all people can walk through this North Temple street without being in danger.”

This is a future vision that the police want to offer all residents of the community.

“We take pride in what we do here and serve the members of our community,” said Wian. “I hope you see this literally firsthand, that you can be sure that we are addressing our concerns in the community, holding people accountable, and taking every complaint seriously.”