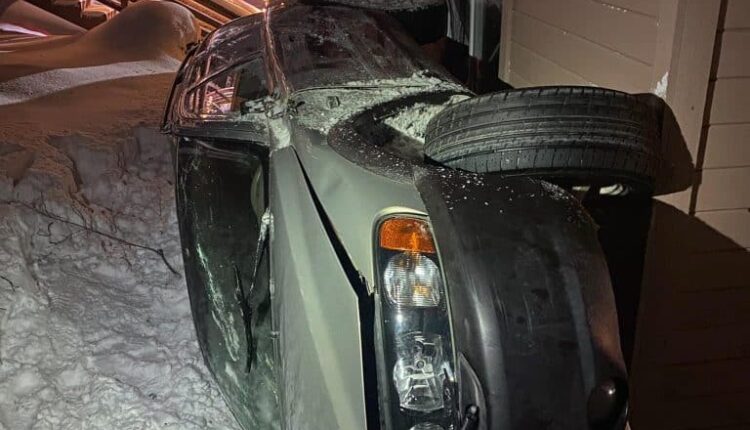 Summit County Sheriff’s Office deputies were dispatched to a non-injury accident on Saturday that resulted in a vehicle colliding with a Summit Park home.

An 18-year-old Park City man was traveling down a slight hill on Matterhorn Drive when his tires gave way to the slushy road conditions, according to a report from the Sheriff’s Office. The vehicle slid off the roadway, struck a snowbank, rolled over and traveled approximately 100 feet down a steep embankment.

An 18-year-old Park City man was traveling down a slight hill in Summit Park when his tires gave way to the slushy road conditions, according to a report from the Summit County Sheriff’s Office. The vehicle slid off the roadway and came to a stop after hitting a home.
Courtesy of the Park City Fire District

The vehicle came to a stop after it struck a home on Parkview Drive, according to the report. No one was injured in the incident.

The road was closed in both directions so the vehicle could be removed. It took a tow company several hours of maneuvering to get the vehicle back up the hill. The Park City Fire District also assisted.

The Sheriff’s Office responded to several other calls between Monday, Nov. 28 and Sunday, Dec. 4, including reports of vehicle burglaries, assault and theft.

A vehicle burglary was reported at Woodward Park City. The back passenger side window of the vehicle was smashed and multiple purses, wallets, credit cards and identification documents were taken. All victims are from out of state. The financial cards were used at a business in Kimball Junction and deputies were able to obtain video of the suspect. Deputies planned to follow up.

Deputies conducted a traffic stop at Kimball Junction and noticed the smell of marijuana coming from inside the vehicle. User amounts of marijuana were discovered. A 42-year-old Park City woman was cited.

A woman parked her rental vehicle in a Canyons Village parking lot. She returned a short time later to find the rear passenger side window broken and her purse missing. She quickly canceled her credit cards to ensure there was no fraudulent activity. She gathered descriptions of all the items that were in her purse when it was taken. There are no cameras in the area. It is unknown if the incident is related to multiple other vehicle burglaries that occurred around the same time.

Deputies were dispatched to SR 40 to assist a motorist that had slid off the road. The driver displayed obvious signs of impairment when deputies arrived. He participated in a field sobriety test and performed poorly. The 29-year-old Park City man was arrested.

A woman reported her vehicle was burglarized in the Willow Creek Park parking lot. The rear driver-side window was broken and her purse was taken. She was able to cancel all financial cards before any fraudulent transactions occurred. The case is likely related to other vehicle burglaries in the area.

A 35-year-old Francis man was arrested after a domestic violence dispute.

Deputies were dispatched to assist a motorist at mile marker 177 on westbound Interstate 80. A records check revealed the driver had a full extradition warrant issued by the US Marshals Service. The man was taken into custody. A search of his person revealed multiple narcotics. A search of the vehicle revealed multiple identification documents that had been stolen, stolen mail and drug paraphernalia. The license plate and vehicle were also determined to be stolen. Deputies learned the 39-year-old Nevada man had claimed to be someone else when he arrived at the Summit County Jail. He was booked on multiple charges.

Summit County Search and Rescue was alerted to an avalanche in Park City at Jupiter Bowl. The dispatch was canceled when it was determined that no one was buried.

A Kimball Junction man reported his garage was left open overnight. The next morning, he discovered his black bicycle, valued at around $4,000, had been stolen. Deputies have no leads.

A man with an open container of alcohol inside his vehicle while it was turned on was questioned by a deputy. The 45-year-old Park City man is an interlock-restricted driver and did not have a device installed in his car. He was arrested.

Deputies were dispatched to Outlets Park City for shoplifting. A deputy working on a special assignment in the location was able to obtain a physical description of the suspect and the vehicle they had left in. A vehicle matching the description was located in the parking lot and a man matching the suspect’s description was seen approaching the car. Deputies made contact with the man and located several items without receipts. The confirmed employees the man questioned by deputies was the man they observed stealing from the store. A stack of magnets was found in the bag as well as numerous items from another store. The man initially gave false information, but was later identified as a 37-year-old Taylorsville man.

A traffic stop was initiated on SR 225 for a speeding violation. Deputies observed signs of impairment in the driver and detected the strong smell of alcohol coming from inside the vehicle. The driver agreed to participate in a standard field sobriety test, which she performed poorly on. The 27-year-old Salt Lake City woman was arrested and transported to the Summit County Jail without incident.

A 28-year-old Salt Lake City woman was arrested at a hotel on an outstanding arrest warrant out of Ogden and several other charges.

A man reported he was assaulted by two men at a gas station in Kamas. Deputies reviewed video surveillance of the incident, which showed one of the suspects smacking a drink out of the complainant’s hand and the other suspect pushing him in the back several times. Deputies attempted to contact the two men but were unsuccessful. A records check revealed they live in Salt Lake County. The case will be screened for charges by the Summit County Attorney’s Office.

A woman reported her vehicle was burglarized at a trailhead near Silver Summit. She said she was away from her vehicle for around 30 minutes and she had left her purse inside. As deputies were speaking with the woman, her credit cards had been used at a business in Kimball Junction. Deputies spoke with the loss prevention team and obtained a video of the suspect. They planned to follow up.

Deputies received a call about a vehicle burglary in Newpark. The complaint said she left her car for 15 minutes. Her purse was inside the car when she left, but the driver-side door window was broken and it was missing when she returned. Deputies arrived a short time later. While speaking with the woman, she received a notification from her card that had been used at a nearby grocery store. Deputies attempted to locate the suspect but were unsuccessful. They spoke with management to obtain video surveillance of the incident. Follow-up will be conducted.

Deputies received a report that a non-forced entry burglary in Wanship occurred one month prior. A chainsaw, a crossbow and the spare tire of an old boat trailer were taken. The complainant is working to collect serial numbers for the items.

West Valley City Police arrested an individual for intoxication and discovered he has a no-bail, felony warrant out of Summit County. The 50-year-old Salt Lake City man was shuttled to the county line, where he was handed off to a Sheriff’s Office deputy. The individual was booked into jail on the warrant.

Deputies observed a vehicle parked at a gas station in Silver Creek for an extended period of time. They approached the driver and noticed the smell of marijuana coming from inside the vehicle. A subsequent search revealed small amounts of marijuana and paraphernalia. The 53-year-old Uintah County man was cited.

Deputies stopped a suspicious vehicle stuck at the end of a road in Summit Park. A 44-year-old Salt Lake City man and a 43-year-old West Valley City woman were discovered to have active, statewide warrants. The pair were arrested and transported to the Summit County Jail without incident. A search of the vehicle revealed methamphetamine and drug paraphernalia. The man faces additional charges.

A 28-year-old Wanship woman was traveling south on Main Street in Coalville and lost control on the snowy road. The vehicle rolled, causing significant damage to the car and a fence near the roadway. The owner was notified. The woman sustained a minor injury to her hand. She was medically cleared on scene.

The Park City Board of Realtors reported multiple properties were listed online for sale “by owner” in Summit County. The chief operating officer has been contacted by the actual homeowners stating they are not selling their property. Investigators are aware of the case and are in the process of contacting the website to see how the properties are being listed for sale without the knowledge of the owners. The investigation is ongoing.

Deputies were dispatched to Outlets Park City for retail theft. Two unidentified men grabbed around 19 pairs of sunglasses and exited the store. The complaint provided vague descriptions of the suspect and their vehicles. They are working to inventory the glasses that were taken. Further follow-up will be conducted pending further information.

Deputies were dispatched to Canyons Village for a theft that occurred on Sunday. A man reported his ski poles were stolen from a rack around 11 am outside of a lodge. The poles are black-silver-white-and-red poles with “big baskets.” There is no suspect information.

A 35-year-old Summit County man was released from jail after two hours by a judge after being apprehended by detectives for a weapons offense and other related charges. The man returned to his residence following his release and immediately began harassing a victim by driving his off-highway vehicle back and forth along the property line. The victim was advised to record and document all interactions with the man. She is afraid for her safety and making arrangements to move, deputies said.

Not so mean after all, the Grinch visits Southern Utah schools, hands out special gifts – St George News