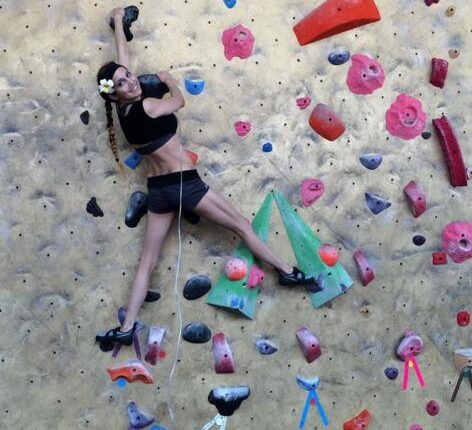 SOUTH OGDEN – Kara Fierro says she was born with an early date of death and is not expected to live to be more than 10 years old due to cystic fibrosis.

But Fierro exceeded that prediction and put a lifetime of activity into its 36 years.

Fierro and her husband Isaac Eaves backpacked Europe twice, hiking all the way to the end of Angel’s Landing while Fierro had a broken ankle and was driving through the jungle. The couple has traveled the world and set foot on almost every continent. They swam with whale sharks and were once big winners on the television game show “The Price Is Right”.

Fierro even took her pole dancing gear to the hospital so she could practice and train.

In a “Legacy” letter she recently wrote and posted on social media, Fierro said she always knew that the notion of “someday” didn’t exist for her, but instead of getting fixated and depressed, that her life could be shortened due to her illness, she decided to enjoy her life to the fullest. After all, she said, what’s the use of being alive if you’re not alive?

“You will always find an excuse not to do something or to put off something,” she wrote. “I urge that you do everything in your power to overcome these excuses. Don’t let these excuses dictate your life. … Live as if there was no tomorrow. “

Fierro from South Ogden is currently in palliative care at the University of Utah Hospital and may soon be transferred to a hospice. One of her three dogs, Captain Jack, was allowed to stay with her in her hospital room.

“My lung function is decreasing rapidly. In June it was 29% and just four days ago it was 25%, ”said Fierro. “It is very tiring to fight for every breath. I take over 50 tablets a day to persevere. “

Fierro is expected to meet with a transplant team soon. She has been denied entry on the list because they felt she did not have the determination to keep fighting.

Then, she said, she had received tremendous love and support from her social media post and she realized that she wanted to keep working on her bucket list.

“I can best describe it as breathing through a straw,” said Fierro. “I’ve been to the hospital more times than I can count. In fact, I’ve been here for the fifth time since January and have been on antibiotics my whole life. Because of the pills I have to take, I am more prone to kidney and liver failure. It is a very dire disease and can affect many of your major organs, but I am determined to keep fighting like a warrior. “

Fierro’s grandparents, Ken and Belinda Fierro, who raised her, said their granddaughter was an inspiration to her and many others in the community.

“The day we got Kara was one of the happiest days of my life,” said Belinda Fierro. “I always felt like she had angel wings. She was my angel who taught me so much about life. She is a fighter and has pushed herself to her limits. She is not a climber. I look at it now and think: ‘It is not finished yet.’ “

Kara Fierro said she hoped she would qualify for a double lung transplant this time.

“I’ve fought so hard and for so long and got so far that I decided to keep my bucket list going,” she said. “I am a warrior; but when I die, I am satisfied with it. I will see it as merciful and also as the beginning of a new chapter.”