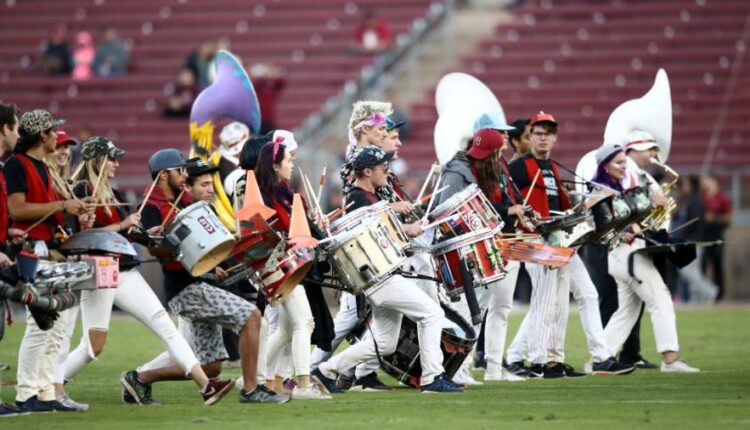 PROVO, Utah – During halftime of the Stanford-BYU football game on November 26, the Stanford Band used controversial phrases during a performance.

The Stanford Band, historically known for pushing the envelope with its performances, had a skit during the BYU game called “gay chicken.” During the performance, three women acted out a wedding ceremony with the “wedding official” using common terms used for temple marriages in The Church of Jesus Christ of Latter-day Saints.

Video from the Stanford Band’s halftime performance during the #BYU game.

The dialogue is in captions on the scoreboard.

BYU is owned by The Church of Jesus Christ of Latter-day Saints.

After the two women were married, the acting wedding official said, “for time and all eternity.” Along with “may you be fruitful and multiply and replenish the earth.”

KSL Sports was on location at Stanford Stadium and saw the performance live. At the conclusion of the sketch, the crowd of 25,094, many of which were BYU fans, produced a smattering of boos as the Stanford Band left the field.

KSL Sports received a statement from a Stanford Athletic Department spokesperson. The same statement was given to BYU’s student newspaper, The Daily Universe. In which they expressed regret for the terms the band used in the performance.

“The Leland Stanford Junior University Marching Band (LSJUMB) has a long history of lighthearted and satirical halftime performances. Unfortunately, some of the language that was used in Saturday’s halftime show did not reflect Stanford University’s values ​​of religious freedom and diversity, inclusion and belonging. The LSJUMB deeply regrets that this performance caused offense to spectators, and the halftime performance review and approval process is being adjusted to ensure that issues like this do not occur again.”

Saturday’s visit to Stanford was only BYU football’s second all-time visit to Palo Alto. The other visit was in 2004. The Stanford Band also caused controversy during that game by staging a halftime performance centered around polygamy.

The next scheduled football game between BYU and Stanford is in 2031 when the Cardinal travel to Provo.