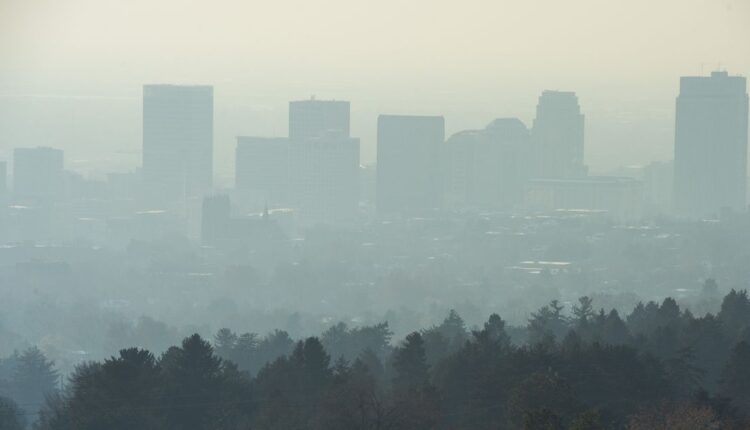 Still idling your car? Here’s why you’re in the minority in Utah.

If you’re idling your car, not lowering your thermostat a few degrees or not taking personal action to improve the state’s air, you’re in the minority in Utah.

Utah Clean Air Partnership began in 2012 and is a nonprofit that, along with its partners, educates Utahns about air quality issues and provides grants which help organizations reduce their emissions.

Executive Director Kim Frost laid out the numbers at the organization’s 10th Anniversary Celebration at the Union Event Center on Wednesday night.

Utah could use a few less emissions: in 2019, Utah emitted 19.2 metric tons of energy-related carbon dioxide per person, compared to the US average of 15.7 metric tons per person, according to data from the US Energy Information Administration.

Salt Lake, in particular, is known for its notoriously bad air quality, visible every winter when the inversion traps pollutants in a hazy smog.

Ozone is the main ingredient in that smog, according to the Environmental Protection Agency (EPA), and it has a detrimental impact on everything from vegetation and ecosystems to your health.

And although the Salt Lake City metropolitan area reached its “lowest ever” measurement for short-term particle pollution this year, a 2022 American Lung Association report states, it still ranks within the top 25 worst cities for such pollution nationally, claiming the 20th- Worst rank, better than the 17th-worst rank it held in last year’s report.

And in the 2021 State of the Air report, created by the American Lung Association, Salt Lake County ranked 12th on a list of the 25 US counties most polluted by ozone.

Salt Lake even had the worst air quality in the world on Aug. 6, 2021, when smoke from West Coast wildfires blew over the state.

UCAIR is trying to change that.

In addition to promoting personal responsibility for the state’s air quality, Frost said that UCAIR has helped Utahns update more than 11,200 pieces of gas-powered equipment such as lawnmowers and snow blowers to battery-powered models, with support from the Utah Division of Air Quality and other partners.

The same programs have recycled nearly 6,100 pieces of equipment.

For instance, the Utah Department of Environmental Quality runs the CARROT (Clean Air Retrofit, Replacement, and Off-Road Technology) Program. Potential participants enter a lottery, and if their names are drawn, receive a $299 coupon code to buy an electric lawn mower in exchange for recycling their gas-powered mower. This year’s lottery concluded in April.

Running a gas-powered lawn mower for an hour is equal to driving a car 196 miles, the DEQ website states.

UCAIR has worked with public and private sectors to replace polluting wood-burning stoves with low-emitting gas stoves, and has exchanged thousands of high-emitting gas cans for safer, cleaner models.

UCAIR periodically holds free gas can exchanges where residents of specified counties can trade their pre-EPA standard gas cans (anything made prior to 2009) for EPA-compliant gas cans.

The EPA estimates that pre-2009 gas cans emit around eight pounds of harmful chemicals each year due to evaporation through secondary vent holes and permeation of vapors through container walls. The EPA-compliant cans have thicker walls and a single venting hole.

“[We] breathe this air every day,” UCAIR Board Chair Emily Schilling said while speaking to the nearly 500 guests. “We have to find solutions today for tomorrow’s air quality.”

UCAIR has thoughts on what those solutions could look like. In an interview, Frost said the importance of Tier 3 fuel can’t be overstated.

“If we could wave a magic wand and have only Tier 3 vehicles on the road, fueled with Tier 3 fuel, it would have the emissions equivalent of taking four of every five cars off the road,” Frost said.

Tier 3 fuel has less sulfur, so it burns cleaner.

It’s not difficult to get, either: gas bought at Sinclair, Speedway, Exxon, Chevron, Texaco and Shell is Tier 3. A map of all Tier 3 gas stations in the state is available at tier3gas.org.

These innovations make buildings more energy-efficient, which in turn reduces emissions, she said.

In the coming months, UCAIR will focus on teaching people about summertime ozone.

“Utahns are very educated about our winter inversions and what they can do to reduce emissions during the colder months,” Frost said. “We plan to let everyone know we have perhaps an equal challenge in the summer with ground-level ozone. It’s not as visible, so it’s not as top-of-mind.”

Many personal behaviors that reduce emissions during winter will also work during summer.

From taking public transit to teleworking to mowing lawns in summer evenings instead of mornings — all can reduce emissions that contribute to ozone formation during the heat of the day, she said.