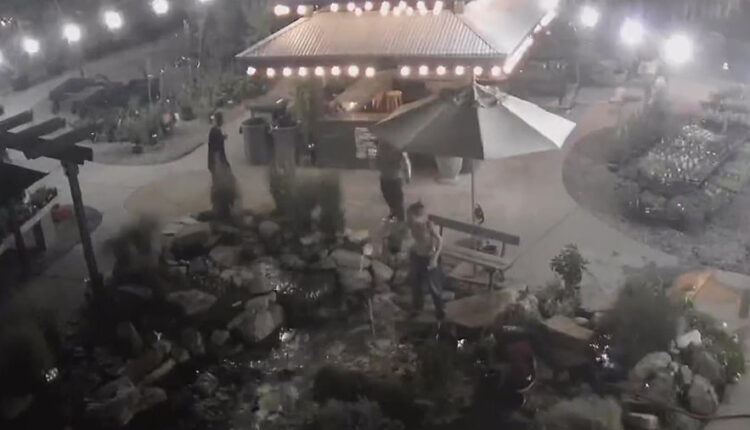 For three straight nights, General manager Kathy Harbin said a group of 5 to 6 people broke into Cactus & Tropicals, trashed their koi pond, and terrorized the animals who live at the nursery.

“Those kids were chasing the cat; you can just see them chasing him around,” Harbin said. “The fish in the pond are our pets as well. Some of them have been in there for more than 20 years. They have personalities, they recognize us.”

She said the vandals attempted to kill the fish swimming inside the pond.

“They poured a lot of toxic chemicals into the pond, ant poison, and different fertilizers,” Harbin said. She said surveillance footage caught them using metal stakes and brooms inside the pond.

Harbin reported the incident to police, and to find out who was responsible, she and her team posted the images on social media.

She said they immediately had tips from people in the community, and one of the teenagers confessed online.

‘We feel like if it weren’t for social media, we probably wouldn’t have found out who they are,’ Harbin said.

She said the cleanup was extensive. The group left several hoses running, which led to flooding inside the business.

Harbin said her employees found the pond, with the fish still inside, murky, with an unusual smell.

“We knew we had to get them out right away. The guys put on rubber boots and went in there, and we spent a couple of hours trying to catch them,” she explained.

KOI POND VANDALISM | Staff at a SLC plant nursery had to extensively clean up their pond after a group broke in, trashed it, and attempted to kill the fish. It was all caught on camera. We talked to the manager about the incident.

We’ll have an update on @KSL5TV at 5. pic.twitter.com/oun27p2sBZ

Harbin said all of the fish survived without any noticeable harm done. After being placed in freshwater, they were reintroduced to the repaired pond.

“I don’t know they understand the impact it has on so many people; we had employees that were in tears,” Harbin said. “There are people who, every day, they come in here and try to make this a beautiful space.”

Harbin said she turned in the reported names to police.

“I hope they are held accountable at some level because it feels like, if they’re able to do that to living things, they need some help,” she said.