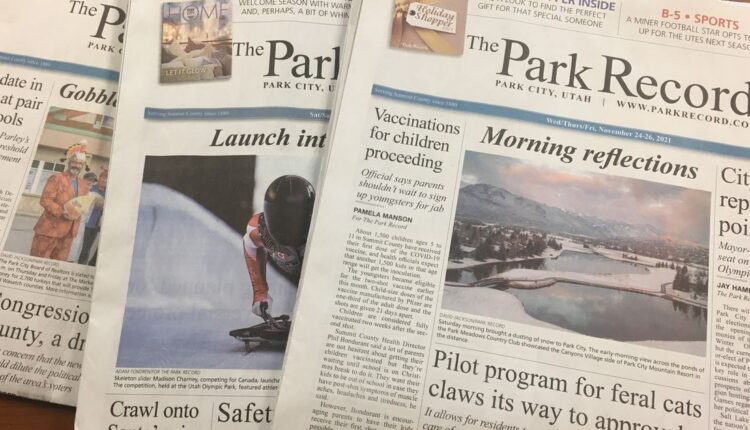 The Park Record is one of several ski resort newspapers sold to West Virginia-based Ogden Newspapers.

(Sean P. Means | The Salt Lake Tribune) Swift Communications announced on November 30, 2021 that it had sold several of its newspapers – including The Park Record of Park City, Utah – to Ogden Newspapers, which owns newspapers in 16 states, including two in Utah: The Standard-Examiner in Ogden and The Daily Herald in Provo.

The company that owns the Park City newspaper has sold it to a national chain that also owns the Ogden and Provo newspapers.

Swift Communications, the parent company of The Park Record in Park City and other newspapers in the ski resorts of California and Colorado, announced Tuesday that it was selling its local media and publishing businesses to Ogden Newspapers, based in Wheeling, W.Va., Tuesday on the websites of the Park Record and other Swift newspapers.

Ogden has papers in 16 states, including The Daily Herald in Provo and the Standard Examiner in Ogden. The company takes its name not from the city of Utah, but from its founder HC Ogden, who founded the Wheeling News in this city in West Virginia in 1890.

The company remains family-owned and the CEO, Robert Nutting, is the great-grandson of HC. Nutting is also the principal owner and chairman of the Pittsburgh Pirates of Major League Baseball.

The transaction, which is scheduled to close on December 31, means Ogden will publish 54 daily newspapers and a number of weeklies and magazines in 18 states, the companies said.

In a statement reported by The Park Record, Nutting highlighted his company’s commitment to journalism – and the role of community newspapers.

“We are the proud successor owners of a great newspaper at The Park Record that has served their community so well for decades,” said Nutting in his statement. “The Park Record has a legacy of strong local journalism that we are allowed to continue. We’re especially excited to partner with a team at The Park Record recognized as innovators in community journalism. We are sure that we will learn a lot from the dedicated employees who will strengthen our team. “

The Park Record was founded in 1880 and bought by Swift from Denver’s Digital First Media (which four months later sold The Salt Lake Tribune to the Huntsman family) in December 2015.