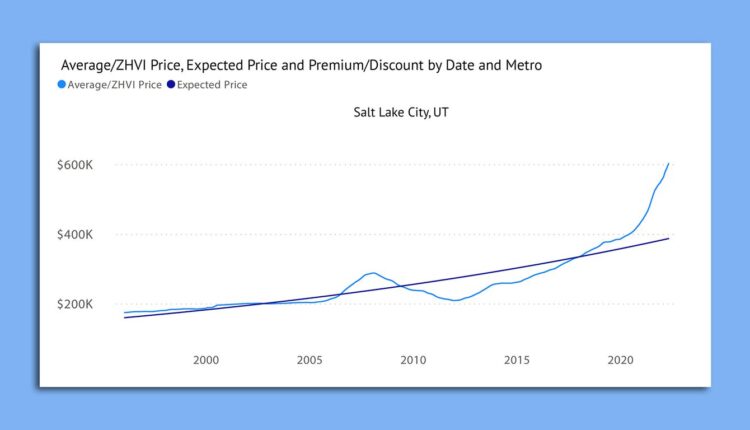 Housing prices in Utah are so far above historic trend lines, that three cities are currently among the 10 most overpriced markets in the country. That’s based on a new analysis from Florida Atlantic University.

Driving the news: Average home prices at the end of April were about 56–65% higher than expected, according to the report which compared actual average prices to long-term pricing trends.

By the numbers: Ogden was the third most-inflated market in the country, topped only by Boise, Idaho, and Austin, Texas.

A screen grab of a chart from Florida Atlantic University.

What’s next: People who recently bought their house may see its value level out when the market eventually settles, said the study’s coauthor Ken A. Johnson.

Meanwhile: The entire Wasatch Front was deemed “overvalued” in a late-May analysis commissioned by Fortune. That means home prices are rising faster than wages and other economic indicators.

Context: When the last housing bubble deflated in 2008, homes were far less overpriced than they are now.

What they’re saying: In 2008, “You had a huge oversupply, and not as many people moving in, so when prices started to fall there was nothing there to catch them,” Johnson said. “This time around you have the opposite.”

zoom out: The American West is heavily represented in the top 10 most inflated markets.

Flaming Gorge Days is BACK & Packing 3 Days of Fun!