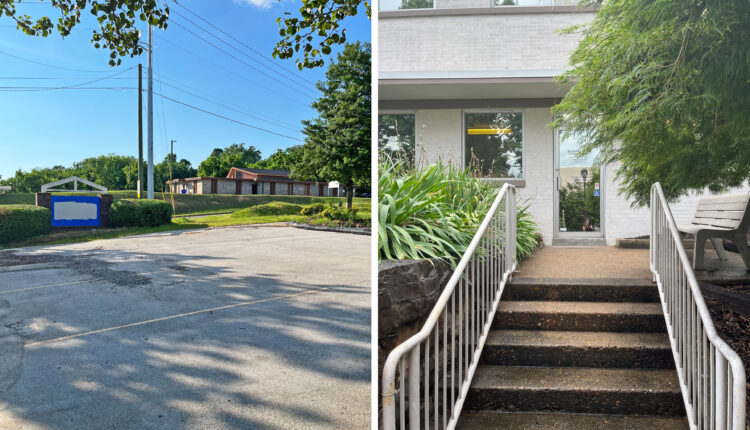 KNOXVILLE, Tenn. — Corinne Rovetti is worried about what will happen to the Knoxville Center for Reproductive Health if the Supreme Court overturns the constitutional right to abortion. The clinic, where she has worked for 33 years helping people across a four-state region, could close.

“We’re unsure if we’ll be able to maintain services at all,” said Rovetti, who is the co-director and a nurse practitioner at KCRH, which provides medication abortions and abortion procedures, as well as gynecological and family planning services. Each year, the center provides abortion services to 1,300 to 1,400 patients, including people from Kentucky, Georgia, and Virginia.

The independent clinic — which opened in 1975, two years after the Supreme Court’s historic Roe v. Wade decision — was one of the first to provide abortion services in Knoxville. KCRH has remained in the same location in the Fort Sanders neighborhood, nestled between the old homes and modern apartment buildings that house students who attend the nearby University of Tennessee. It became the only clinic that provides abortions in the area after Knoxville’s Planned Parenthood facility was intentionally set on fire on Dec. 31.

“There’s just a lot of things unknown,” Rovetti said in an interview at KCRH. “We are exploring, and we’re waiting. It’s just hard to make many decisions at this point until we know where things stand.”

The Supreme Court is slated to issue a decision on an abortion case in the weeks ahead. The case, Dobbs v. Jackson Women’s Health Organization, turns on the state of Mississippi’s effort to ban most abortions after 15 weeks of pregnancy. Roe guarantees abortion access generally until a fetus is viable, which is around 23 weeks. In early May, Politico published a leaked draft opinion in the case that indicated the justices would overturn the long-standing precedent, thus returning abortion regulation to individual states.

Tennessee is one of 13 states with a “trigger law” that would kick in if Roe is struck down and ban abortions in most situations. The trigger law includes a 30-day window before the prohibition is implemented, but another measure could speed up that final outcome.

In 2020, Tennessee’s Republican governor, Bill Lee, signed a law that makes abortion illegal after embryonic or fetal cardiac activity is detected, which can happen as early as six weeks into a pregnancy. The vast majority of KCRH abortions (approximately 95%) occurred six weeks after a patient’s last menstrual period, according to data provided in court documents. A federal judge stopped the six-week ban from being implemented soon after it was signed, but that injunction could be lifted if the Supreme Court overturns Roe.

Rovetti said that because of all this her clinic may have to stop providing abortions almost as soon as a decision comes down. But much will depend on the final opinion’s wording.

For now, KCRH staff members have started advising patients that an abortion ban could begin any day. Tennessee, like 26 other states, has a mandatory waiting period for people seeking an abortion between an initial, required counseling appointment and a second visit for the actual abortion. Tennessee requires women to wait 48 hours.

“We have to say, ‘We really hope we can provide the service for you, but if we get a decision tomorrow, you still have another 24 hours before you can return and then we will not be able to see you,’” Rovetti said. “So there’s a lot of upheaval and a lot of unknown and a lot of despair.”

A few miles east is the Planned Parenthood clinic. When the arson happened, it was updating its facilities so it could offer abortion procedures. Previously, the clinic had provided only medication abortions up to 11 weeks of pregnancy.

Planned Parenthood plans to rebuild, although the doors might not open again for 18 months. Ashley Coffield, CEO of Planned Parenthood of Tennessee and North Mississippi, said the clinic is in the design phase for construction.

The Planned Parenthood facility’s sign was recently vandalized with white paint, to block out the clinic’s name. “We’re replacing the sign,” said Coffield. “It’s a message to the community that we’re coming back.”

In the meantime, Planned Parenthood is aiming by this fall to open a mobile clinic that will provide sexual and reproductive health services in the Knoxville area.

Coffield said that if abortions are banned in Tennessee, Planned Parenthood expects to counsel patients and assist them with the logistics and costs of traveling to a state where the service is legal, as well as to provide follow-up care. Some people experience heavy bleeding after abortions and could be scared to go to an emergency room for fear of being charged with breaking the law, though in Tennessee the physicians who provide abortions are the ones who would be prosecuted.

“We can tell our patients facts about legal services” elsewhere, said Coffield. She said clinic staffers are looking at referring patients to North Carolina, Virginia, or possibly Florida.

But not everyone is sure that counseling patients to seek an abortion outside the state will be safe. Dr. Nikki Zite, a Knoxville OB-GYN, said some Tennessee doctors are uncertain about what they will be allowed to do and say to pregnant patients considering abortion, especially those with ectopic pregnancies or who are experiencing miscarriages.

“We feel that the ban and a lot of the anti-abortion legislation is written in vague terms that make it hard to treat patients,” said Zite. Tennessee’s trigger law says abortions may be conducted by doctors only to prevent a death or “to prevent serious risk of substantial and irreversible impairment of a major bodily function of the pregnant woman.”

“But exactly how much risk there needs to be is not clear,” Zite said. “Different physicians practicing at different institutions will have different interpretations of that law.”

Some Tennessee abortion-rights groups said that they’ve been anticipating this moment for years but that activity has ramped up since the draft opinion was leaked.

Max Carwile — a volunteer and one of the founders of Mountain Access Brigade, an East Tennessee group that operates a phone line that people can call or text to get abortion support and financial assistance — said her group’s main focus now is fundraising.

Once the trigger law goes into effect, Carwile said, “getting abortion care will be monumentally more expensive, since people will have to travel to another state.”

One thing is certain, said Henschen: “We are not going to give up. If they think they are going to criminalize abortion and everyone is going to be sad and stay home, they are sadly wrong.”

In a May tweet, Stacy Dunn, president of Tennessee Right to Life, was quoted as saying that her organization wouldn’t comment on the Supreme Court draft and awaited the official opinion.

Still, as Tennesseans who support abortion rights prepare for the possibility that access will end, they’re also racing against time, almost like watching the last pieces of sand drop through an hourglass, uncertain when the final one will fall.

“How do you also provide services when you’re waiting for a decision that could come down at any moment?” Rovetti asked.

KHN (Kaiser Health News) is a national newsroom that produces in-depth journalism about health issues. Together with Policy Analysis and Polling, KHN is one of the three major operating programs at KFF (Kaiser Family Foundation). KFF is an endowed nonprofit organization providing information on health issues to the nation.

This story can be republished for free (details).