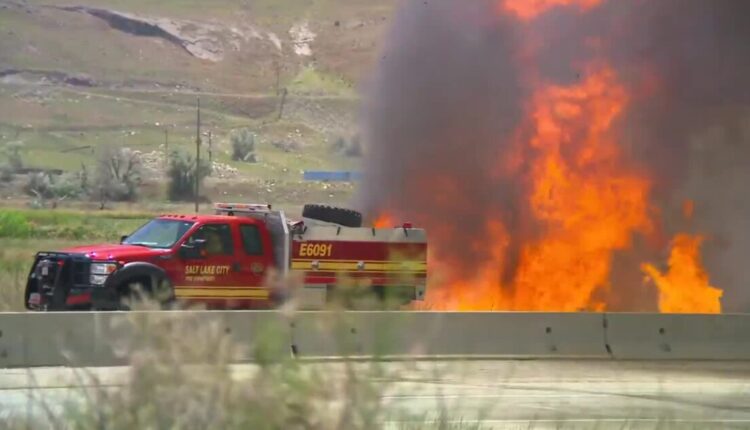 SALT LAKE COUNTY, Utah — All lanes of traffic have reopened after the Lakeshore Fire forced the closure of eastbound Interstate 80 just west of Salt Lake City on Friday.

READ: How to help avoid fires during red flag warnings

The fire, which was estimated to be about 30-40 acres, can be seen near mile marker 103 on the border between Salt Lake and Tooele counties.

Utah Highway Patrol officials originally shut down eastbound traffic on I-80 at mile marker 99 and diverted to SR-201 eastbound. However, all lanes of traffic were reopened at around 3:45 pm

Westbound lanes on I-80 remained open the entire time.

The Great Salt Lake State Park and Marina has been temporarily closed due to the fire.

On a hot and windy day across Utah, another brush fire, the Barney Wash Fire, was burning about 40 acres near the Coppertone Mine on Rio Tinto Kennecott property.

“Our emergency response teams have been mobilized as well as firemen from the Unified Fire Authority and local police,” said Simon Letendre with Rio Tinto. “There are no current threats to people and the cause of the fires remains unknown at this time. We will continue to monitor the situation until the fires are extinguished and the sites secured.”

FOX 13 News crews on the scene of the Barney Wash Fire said it appeared to be under control and some resources were being released. As the fire was burning along a power line area, crews were on scene to assist that power was not lost.

Because of erratic winds, fire crews have been unable to fly to assist in putting out flames at either the Lakeshore or Barney Wash fires.

At around 3 pm Friday, a fire broke out in the Bluffdale area. Video from Utah Department of Transportation cameras showed smoke blowing across southbound lanes of Interstate 15 at 15200 South. The right shoulder of the highway was closed, but traffic was not affected.

In Davis County, both directions of the Legacy Parkway were closed to all traffic for a short period of time because of a brush fire just north of Parrish Lane. Traffic was reopened at around 1:15 pm

Earlier Friday, parts of 7200 West near SR-201 were closed for a short period of time after power lines came down and started a fire.

Two left lanes were closed on northbound Interstate 15 after a truck hauling paper and plastic sparked a grass fire after rolling over as it was on the ramp to westbound Interstate 80. The driver was injured in the accident and transported to the hospital.

Stay with fox13now.com and FOX 13 News for the latest on this breaking news story