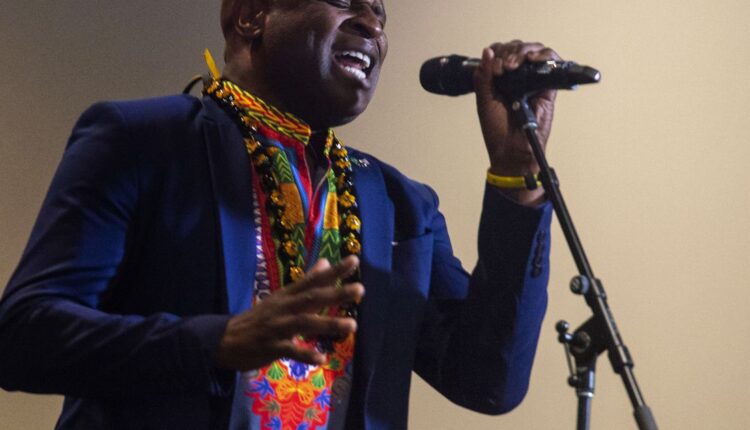 ‘United for Ukraine’ benefit concert to happen in Provo this weekend

The concert is put on by Halcyon Productions and will take place at the Experience Event Center.

(Rick Egan | Salt Lake Tribune file photo) Singer Alex Boyé, seen here in 2019, is one of the musical acts performing at a benefit concert in Provo on Saturday, April 9, to benefit an aid group helping refugees fleeing the Russian invasion of Ukraine.

A group of Utah and international musicians are planning to join forces this weekend for a concert to benefit people fleeing the Russian invasion of Ukraine.

The show is set for Saturday, April 9, at the Experience Event Center, 1440N. Moon River Drive, Provo. The show starts at 6:30 p.m

Among those on the bill are: British-born, Utah-based singer Alex Boyé (who sang at a March 12 rally at the Utah State Capitol in support of Ukraine); Madilyn Paige, a Provo native who competed on season 6 of NBC’s “The Voice”; Provo pop artist Jane Beeson; singer Ryan Innes, a Brigham Young University alumnus who competed on “The Voice” in season 4; Provo singer Aaliyah Rose, who appeared on season 12 of “The Voice”; and Christian singing group The Bonner Family.

Others set to perform include The King Will Come, EJ Michels from the band Foreign Figures, and Aaron Kellim.

The show’s producers say, on the event’s website, that “100% of your ticket goes to Nova Ukraine to purchase immediate aid like food, medical and personal hygiene supplies, and baby care items” for those who have fled the war Ukraine.

Nova Ukraine is a 501(c)3 non-profit organization established in 2014. So far, their website states they have raised ‘over $14m’ in humanitarian aid for Ukraine. They also state that donations result in “immediate aid.”

Tickets for the event are $25 for general admission. A “VIP experience” is $250, and an “ultimate VIP experience” goes for $500. People can also donate to the event without buying a ticket.