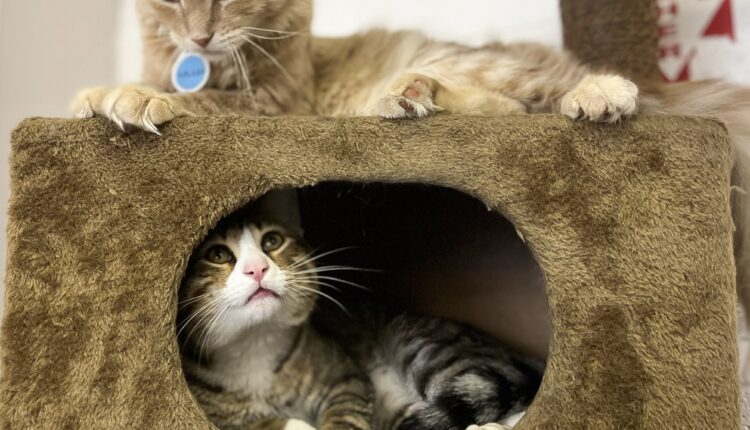 Animal shelters throughout Utah are being overwhelmed with increasing numbers of animals as adoptions slow down and pet owners return them to shelters.

In a press release from the Humane Society of Utah, associate director of marketing and communications Guinnever Shuster said shelters across the state are at or over capacity.

“Adoptions are slowing down and animals are waiting longer than usual to get adopted,” Shuster said.

According to Betenson, the Uintah County Animal Shelter brought in 54 animals in the first six days of June. “This is a massive number for a small rural shelter,” Betenson said.

Each month the National Federation of Humane Societies releases statistics on their Data Matrix which show animal intake numbers and details.

The gross intake of animals has reached 3,375 in Utah during 2022 so far. In June, the large number of animals relinquished by their owners to the shelter reached 400.

Ella Davies of Cuddles Rescue and Lounge, a non-profit cat rescue, said many individuals adopt animals without knowing what the responsibility brings. “A lot of cats at the shelter are already being brought back,” Davies said. “It’s heartbreaking.”

Davies also acknowledged that rising inflation may have an effect on lower adoption rates and increased owner surrenders.

“Yeah we’ve seen some of that and it’s been the same here,” Davies said. “We’ve had to raise our prices a little bit because of all the inflation, which is annoying because we want to make it as low cost as possible while still being able to take care of the cats.”

To combat the rising costs of animal care, the shelter also charges visitors for coming to play with the cats, even if they don’t adopt.

“People come in and are upset that they have to pay to visit the cats,” Davies said. “I wish people understood the costs of taking care of the animals. We are doing our best.”

Because of the cost and limited space, Cuddles Rescue and Lounge is only able to keep 20 to 30 adult cats and 16 kittens at a time. “Unfortunately, we can’t take strays or cats from the public, we take them all from shelters,” Davies said.

“For example, you now have to be 21 to adopt an animal,” Van Dam said. “Most shelters also won’t allow pets to be returned from other places, they will only take animals back that were already in the shelter.”

It’s common for PetSmart locations to house 10 to 15 animals from surrounding shelters for a period of time to promote adoption. Van Dam said the Provo location sometimes does this with cats from nearby shelters.

More national statistics regarding animal shelter numbers can be seen on the Shelter Animals Count website.

Utah’s metro areas are among the nation’s most employed