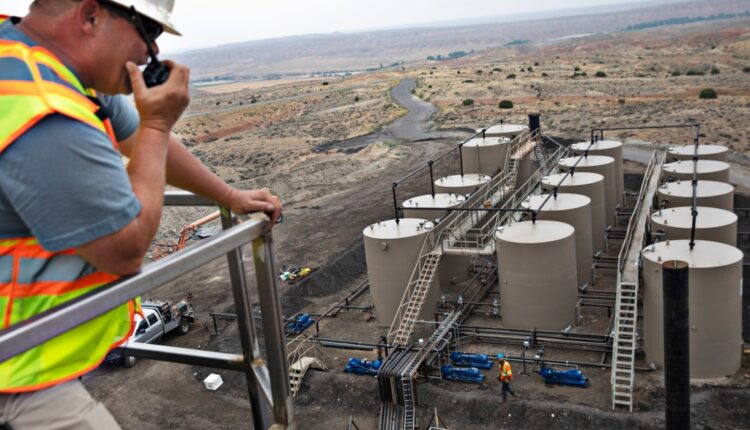 Utah rail line would bring up to 10 oil trains through Colorado, Denver, daily

A railroad project out of Utah that would bring up to 10, two-mile-long oil trains through Denver daily has federal approval but no clear picture of the environmental damage it might cause, dozens of opposing Colorado counties and cities say.

The proposed 85-mile line would allow drilling operations in northeastern Utah’s Uinta Basin to expand and connect to refineries in Texas and Louisiana, rolling through Colorado in the process, likely alongside Interstate 70 and the Colorado River.

Work on the new line could begin as early as next year but the project faces new hurdles after Eagle County and several conservation groups sued to require a deeper environmental investigation. Dozens of other cities and counties in Colorado have also asked the state’s US senators to intervene.

Drilling for more fossil fuels is the wrong move as the American West suffers from a decades-long megadrought, record-setting wildfires and other consequences of climate change, Glenwood Springs Mayor Jonathan Godes told The Denver Post. And rolling massive quantities of crude oil through the heart of his city, through the heart of the state, presents even more immediate risks.

“It’s potentially catastrophic on a number of levels,” Godes said.

Existing drilling operations in the area extract about 80,000 barrels of a specific type of oil, called waxy crude, daily, Deeda Seed, of the Center for Biological Diversity, said. Waxy crude solidifies at room temperature and must be heated to remain liquid.

Utah’s Uinta Basin is notoriously inaccessible, undeveloped and wild, Seed said. So a group of Utah counties, called the Seven County Infrastructure Coalition, proposed the rail line in 2019 to help companies move the waxy crude out of the basin and to expand drilling operations.

A drilling rig operated by Nabers Co. drilling on land leased by the Bill Barrett Corporation from the federal government, built with the approval of the Bureau of Land Management, near Vernal, Utah, March 21, 2012.

Should the project move forward, drilling companies would be able to more than quadruple production up to 350,000 barrels of waxy crude a day. The Rio Grande Pacific Corporation would then transport the oil by train along the new line and into Colorado where it would merge onto existing tracks, ultimately passing through Denver on the way east.

The federal Surface Transportation Board approved the proposal in December and faced pushback immediately.

Board member Mark Oberman, the sole vote against the approval, wrote in his dissenting opinion that the project would dump millions of metric tons of greenhouse gasses into the atmosphere, harm local water sources, land and wildlife habitat.

He questioned the need for increased oil production in the basin and whether there is enough fuel there to provide long-term business for the proposed line. At the heart of the issue, Oberman wrote, is whether the economic and transportation benefits of the new line outweigh the environmental damage it would wreak.

“In my view, the Line is not worth these costs,” Oberman wrote.

Eagle County officials agreed and sued the board in federal appeals court in Washington DC, last month to try and force another environmental study.

“The downline impacts to the residents of Colorado were all but ignored, which is unacceptable given the devastating wildfires Colorado has seen in the last few years due to our drying climate,” Eagle County Attorney Bryan Treu said in a statement.

“The decision will have long-lasting, negative impacts on our communities, forests, waterways, and wildlife, and a more thorough environmental review is simply a must,” Treu added.

Ted Zukoski, a senior attorney for the Center for Biological Diversity, said his organization, alongside the Sierra Club and three other conservation groups also south last month. Their case has since been consolidated with Eagle County’s, he said.

The letter from Glenwood Springs officials to Bennet cited the Grizzly Creek Fire and the following mud and debris flows that followed in Glenwood Canyon, closing Interstate 70, as added risks.

“The risk of introducing heated oil trains to such a sensitive area is simply too great,” the letter says.

Mike McKee, executive director of the Seven County Infrastructure Coalition, disagreed with claims that officials don’t fully understand the environmental risks but otherwise declined to comment. Instead he referred additional questions to the Rio Grande Pacific Corporation, which would run the rail line. Representatives for that company did not return messages seeking comment.

McKee told the Uintah Basin Standard in January, though, that the new line could generate more than $100 million in government revenue and taxes while also creating jobs.

The rail line has been in discussion for more than a century, Utah Public Radio reported, with officials proposing the concept as far back as 1902. A 2015 estimate put its cost at $5 billion, the Salt Lake Tribune reported, describing the area’s oil industry as an economic boon and a boondoggle.

On its face the project would churn up more than 400 streams in Utah and strip some 10,000 acres of some of the state’s most untouched land, Seed said. That damage would diminish habitat for fish, pronghorn, mule deer and sage grouse.

The added drilling, building and operating the new rail line would also churn out greenhouse gasses at a time when the country should be reducing emissions, Zukoski said. He pointed to the United Nations report published Monday that indicated the effects of climate change – fires, floods and droughts – are likely to gain momentum without drastic action.

Then transporting the waxy crude would create even more issues.

“What happens if one of these trains derails into the Colorado river?” Seed said. “They’re not stable and these are going to be heated tanker cars, which could start fires.”

Eleven cars from a 96-car train – carrying waxy crude from Utah and oil from North Dakota – derailed in Oregon’s Columbia River Gorge in 2016 and caught fire, the Oregonian reported.

Seed pointed to a partial train derailment in Colorado in February, where several cars fell into the South Platte River, as further proof of the risk the project invites.

Godes said he fears the risk of derailment not only in downtown Glenwood Springs, where the tracks run, but also in Glenwood Canyon, along the Colorado River, upon which millions in the country depend.

“There goes our gold medal fishing streams, there goes our rafting industry, there goes our tourism and tourism for communities like Silt, Rifle, Grand Junction,” Godes said. “This is a very fragile ecosystem to be running a dangerous train through.”

Not only could that rail traffic interrupt life in Colorado’s towns and cities, Denver included, Seed said, but an accident in any one of them could put lives at risk.

Runaway railroad tank cars carrying oil derailed and exploded in a Quebec town in 2013, killing 47, destroying 40 buildings and forcing a $150 million decontamination program which required another 37 buildings to be demolished and the removal of 294,000 tons of debris and soil, the New York Times reports.

The Surface Transportation Board should reexamine the project and these risks, Seed said.

And so, too, the US Forest Service should take a closer look, Zukoski said. The Center proactively appealed to the Forest Service, requesting that it deny access to the project, which would have to cross 12 miles of the Ashley National Forest.

Representatives of the Forest Service could not immediately be reached for comment, but officials in the agency are expected to make a decision on the project Friday, Zukoski said.