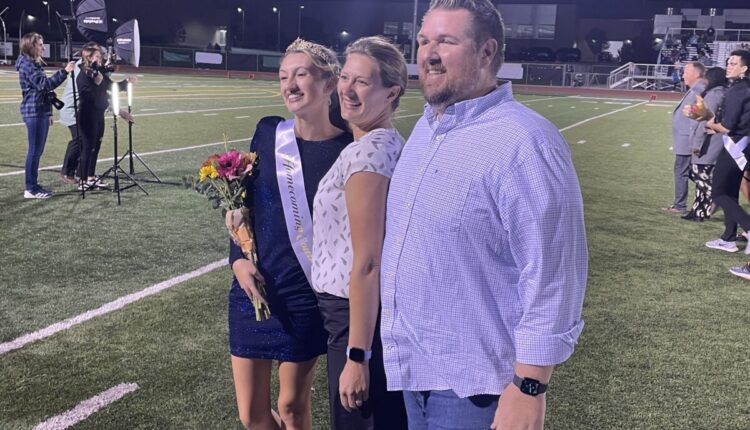 Kayla Pagnani and her parents pose for a photo during halftime of the Region 9 game in Provo on Friday, Sept. 30, 2022. Pagnani plays football for the Provo football team and was also part of the Homecoming royalty.

Week 8 in Utah County prep football was again filled with sparkling individual performances along with a stellar come-from-behind victory in a contest between two northern Utah County Region 4 rivals.

Football expert Brian E. Preece takes a look back at the superlatives from last week’s action:

Game of the week: Look no further than Skyridge’s 31-30 win over rival Lone Peak in a game that lived up to the hype.

Trailing 16-3 at halftime and 30-10 at the start of the final stanza, Skyridge scored the last 21 points to stun the Knights and their home faithful.

Smith Snowden ignited the comeback with a 96-yard kickoff return for a touchdown and then Tate Walker crossed the goal line two more times. It was then up to Ian Keeslar to kick the winning PAT and he split the uprights.

Special team superlatives: Besides the kickoff return there were other big-time special team plays. Lone Peak’s Ian Sanchez kicked field goals of 31, 54 and 56 yards, the last one being on the final play of the half that gave Lone Peak a 16-3 halftime lead. His namesake Ian Keeslar of Skyridge also nailed a 33-yard field goal and was 4-for-4 on his extra points.

Timpanogos’ Luke Livingston had a 55-yard punt return for a touchdown as the Timberwolves crushed Hillcrest 51-14. Reid Harris added a 38-yard field goal to add to the Timberwolf scoring barrage.

The rest of the story: Springville’s Tevita Valeti is a touchdown scoring machine and has 15 touchdowns over eight games. But his performance against Wasatch two games ago was extra special and record setting. Valeti had a state record of 58 rushing attempts for 349 yards with four touchdowns.

Defensive proof: Lehi posted its sixth shutout of the season against Alta winning 20-0. It was the Pioneer’s third straight shutout. The last team to score against Lehi was Corner Canyon but the Pioneers held the Chargers scoreless in the fourth quarter meaning that Lehi has gone 13 straight quarters without yielding a point.

In fact, in the last three games, Lehi’s defense has scored three touchdowns as Hema Katoa, Kadiyon Sweat, and Nathan Anderegg have had interception returns for touchdowns.

American Fork shut down the explosive Pleasant Grove offense as Champion Edwards tossed two touchdowns to lead the Cavemen to a 17-0 victory.

Big Time and Breakout Performances: Payson’s Trevyn Wall scored three different ways as Payson routed Tooele 42-7. Wall had a 93-yard kick return for a touchdown, added a 75-yard run to paydirt and even threw a 19-yarder to teammate Cooper Swasey.

Spanish Fork’s Britt Nielsen had two picks including one he returned 20 yards to paydirt as the Dons crushed Wasatch 56-20.

Though in a losing cause, Orem’s Feleti Iongi thrilled the home faithful with a 90-yard kickoff return for a touchdown while also scoring on a 23-yard pass from Lance Reynolds III, who had three touchdowns passes while running for another.

Provo’s Tagai Lesa did it on both sides of the ball scoring on two runs of four yards and then had an interception and return of 35 yards to set up another touchdown as the Bulldogs eased to a 35-19 victory over Salem Hills.

Homecoming Fun: Provo broke out his new Bulldog head cauldron for his Homecoming contest against Salem Hills. Designed by metals teacher Kaleb Money, the cauldron was lit during halftime, and perhaps in a new tradition, Bulldog players gathered by it before taking the field for the second half.

The cauldron was met with huge approval by Bulldog players, coaches and fans.

“That was so cool,” said Provo offensive lineman Paxton McGinn of the lighting of the Bulldog head cauldron. “I’m so happy that our school has the facilities to make something like that and the shop classes we have here.”

It’s not that unusual that football players be part of homecoming royalty. In fact, Provo star running back Jamison Harward was the Homecoming King. But Provo had another player as royalty as Kayla Pagnani was so honored. Pagnani is one of the rare female gridiron players in the state, and on the last play of the game against Salem Hills, she downed the ball.

Two weeks ago, Spanish Fork’s Joshua Buck was part of Spanish Fork’s royalty and part of the Homecoming festivities is an actual dance contest between those that are nominated. Spanish Fork’s Channel 17 showed some of the competition where Buck ended up being the winning contestant. And in the game against Wasatch this week, Buck crossed the goal line three times.

Upcoming Big Game of the Week I: A Thursday late afternoon/early evening tilt (5 pm) has Timpview visiting Lehi for what should determine the Region 8 title. The two teams split last year as Timpview won the regular season contest but then the Pioneers turned the tables taking out the Thunderbirds in the quarterfinals enroute to winning the 5A state title.

Upcoming Big Game of the Week II: Undefeated Stansbury travels to Payson for a Thursday night contest. If the Lions can pull the upset they could create a 3-way tie between them, Stansbury and Cedar Valley for the Region 7 title as each team would have one loss. A Stansbury win locks up the title and Payson would end up in third place in league play.

Undefeated Teams Dwindling: Previously unbeaten Farmington fell to Davis last week so there are no 6A undefeated teams. 5A has two unblemished teams in Lehi and Stansbury. No team is undefeated in 4A but Juab and Morgan are undefeated in 3A, as are San Juan and South Summit in 2A. Enterprise is the lone team without a loss in 1A.

In 2A, winless American Leadership Academy is ranked No. 11 out of 12 programs.

Provo players gather around the new Bulldog cauldron that was lit for the first time before the Region 9 game in Provo on Friday, Sept. 30, 2022. It was designed and built by Provo High metals teacher Kaleb Money.