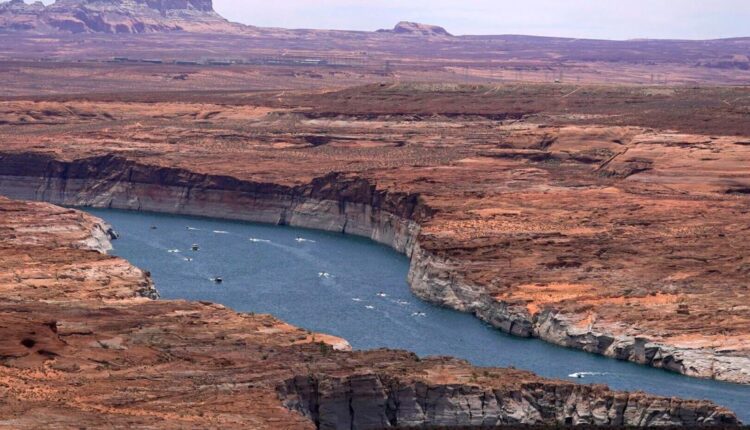 PINEDALE — Just because the vastly important Green River starts high in the northern Wind River Mountains of Sublette County before flowing into the Upper Colorado River Basin system does not mean its closest water users have an extra advantage.

They filled the Pinedale Library’s Lovatt Room at the invitation of the Green River Cattlemen’s Association.

The Upper Green – the entire Green River – is an integral part of the Upper Colorado River Basin’s mandated outflow to lower basin states.

To make a very long story shorter, the Upper Basin and Lower Basin have different policies, compacts and court decisions that shape how water flow is divided and managed from Wyoming to Arizona.

Many people attending the water meeting wanted to hear about the ongoing drought since 2000, voluntary conservation and possibly mandated curtailment programs – and how and when this will pinch the Upper Green River Basin’s irrigation needs.

That it will affect local, traditional water consumption is a “given.”

Pinedale rancher and Rep. Albert Sommers also updated the audience on governors’ efforts to create Colorado River working groups so more users in the state could provide input on retaining and distributing water.

Brown has delivered his nutshell of water history many times and his sole role is to defend the state’s water interests.

His update of the current “dire situation” was to let local and regional Green River water consumers know “what’s going on today so we can better plan.”

Many listening to Brown and Pierce wanted the bottom line – how and when conservation and reductions would be necessary – and how the state will help them adjust.

Even with modeled scenarios, Brown said the state “likely won’t know until middle of April, beginning of May of that year” how the state and Upper Basin would curtail consumption in a given year. A best bet now seemed to be in 2025.

“I don’t have an answer,” Brown said.

“We have to have that ability,” Sommers said. “We can’t afford to be successful with our operations with declining water.”

An Upper Green pilot program from 2015 to 2018 paid volunteering water users for cutting back on their consumption and might be revived with federal funding. Users were paid $150 to $185 per acre foot of water; a federal program might emerge with a fixed firm price, Brown said.

Rancher Janet Beiermann said, “We participated three years ago, we shut off water two weeks early and then turned it back on again later.”

She asked if the State Engineer’s Office had data showing if more water went on to Flaming Gorge or Lake Powell. Brown said the office has a final system report.

“We’ve got a whole diversity (of users) in the Green River Basin that are not visited by our hydrographers,” he said. “We need to measure actual consumptive use in the Upper Green.”

A study of four techniques to most accurately measure agricultural water consumption revealed the most effective is “remote sensing” by overhead satellites.

A single field’s water consumption could be determined this way, Pierce said, and the final report is due in November.

He shared preliminary thoughts about a more structured future for water uses in the Green River Basin. These might one day include a basin-wide priority schedule, historic consumptive use data, measuring devices on all diversions, locking pie-shaped pivots, lockable headgates on all diversions, more frequent checks and additional reservoir monitoring.

Actual curtailment and regulation discussions are constantly in the works, but the West’s “hydrologic cycle” of “hot and dry” means “basically, something has to go without.”

Be the first to know