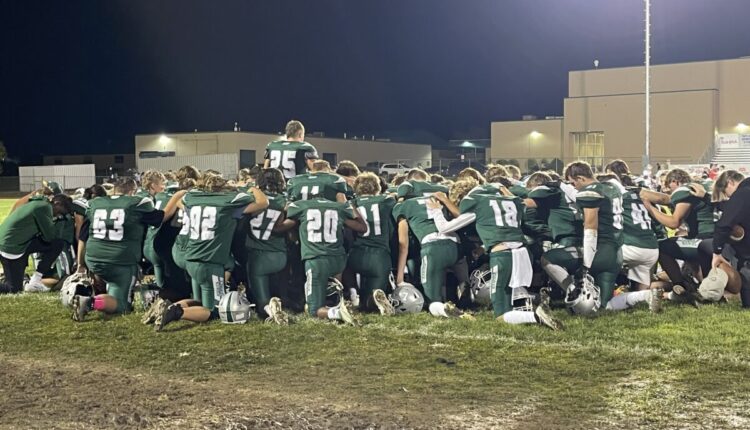 In a sign of unity, Payson players gather in prayer after their teammate Owen Corte suffers a devastating leg injury late in Payson’s 43-26 win over Uintah in Payson on Friday, Sept. 16, 2022.

It was a weekend of tough wins, powerful moments and more fantastic individual performances during Week 6 of prep football involving area programs.

Football expert Brian E. Preece takes a look back at the superlatives from last week’s action:

Game of the Week I: The game of the week actually happened on Thursday when Springville held off Provo, 18-14. Thanks to a late defensive stand and the Valeti brothers, Springville got the big Region 7 win over the Bulldogs. Tevita Valeti had two rushing touchdowns including the go-ahead score midway through the fourth quarter while Tisi added one in the second quarter. For Tevita Valeti, it was his tenth touchdown on the season. Springville (5-1, 2-0) will host Wasatch (3-3, 2-0) in a battle of unbeaten teams in league play, while Provo (4-2, 1-1) will travel to Spanish Fork (3 -2, 1-1).

Game of the Week II: Lone Peak got its first win against a Utah team when the Knights defeated Pleasant Grove, 24-14. Big plays ruled the day as Kaden Hodson had two touchdown passes for the Knights including a 81-yarder to Crew McChesney and a 70-yard connection to Trey Robinson. Ian Gomez connected on a 33-yard field goal which gave the Knights some extra cushion. Lone Peak moved his record to 4-1 overall, 1-0 in league play and will travel to rival American Fork (4-2, 0-1). Meanwhile, Pleasant Grove (4-2, 0-1) will visit Westlake (2-4, 0-1).

Pick-6 Magic: Provo has posted a pick-6 in three straight games. Drew Deucher had a school record 100-yard interception return against Springville Thursday night that gave Provo a temporary 14-12 lead. Deucher also had a huge pick six in Provo’s 35-28 win against Viewmont three weeks ago, while teammate Kyle Larsen had a 49-yard interception return to the house in Provo’s dominant win over Maple Maple Mountain two games ago.

Break out performances: Mountain View’s Carter Burgi had two long touchdown runs of 62 and 45 yards respectively helping the Bruins get their first victory of the season, a 41-31 road win over Hillcrest.

Two games ago Trent Call came in and played well leading Skyridge to a 20-13 comeback win over Timpview. Call filled in for McCae Hillstead for a second time and definitely found his comfort zone tossing three touchdown passes, running for one and catching another, as the Falcons flew past Westlake, 62-6.

Lehi’s Hema Katoa had a 50-yard interception return for a touchdown and the Pioneer defense added a safety as Lehi shutout 6A Fremont, 46-0.

Payson quarterback Kade Edwards threw for three touchdown passes including a 80-yarder to Dylan Wall on the game’s opening play to lead Payson to an easy 43-26 win Friday night.

Upcoming Big Game of the Week: Well, look no further than Skyridge hosting Corner Canyon. This could be a preview of the 6A state championship and the Falcons can really make a statement by beating Corner Canyon, who has made appearances in the last four state championship games. Isaac Wilson will be Charger signal caller but the Falcons have defeated another Wilson in a big-game when five seasons ago Skyridge defeated Corner Canyon and current New York Jet Zach Wilson, Isaac’s older brother, in the semifinals. Undefeated Skyridge will go in as the favorite as Corner Canyon has lost twice this year, including a 25-24 setback to Lehi two games ago

Upcoming Big Game of the Week II: Cedar Valley will travel to Stansbury in the game that will undoubtedly decide the Region 7 title. Both teams are undefeated in league play. The undefeated Stallions will be a big favorite playing at home, but this is a great chance for the young Aviator program to get a statement win.

Powerful moments: In the fourth quarter of the Uintah vs. Payson game, Lion Owen Cottle suffered a serious leg injury that delayed the game for several minutes and required paramedics and ambulance transportation. That’s when, on his own, Payson’s outstanding defensive lineman Trey Worthen gathered his team where a prayer was offered on Cottle’s behalf.

Cottle, by the way, comes from some great football lineage. His grandfather Don Holtry played football and wrestled at Utah State and then coached West High to the 1992 state title. His uncle Jeff Holtry was a 2-time recipient of the Mr. Football Award by the Deseret Morning News and played on the 1997 Michigan team that won the national championship before finishing his career at BYU.

Historical Perspective: It’s been decades since Payson was a football power so one can forgive Payson’s Edwards youthful indiscretion for saying that Lion head coach Arnold Ale has brought a winning culture “never seen in Payson football”. But some of the older generation know that Payson was a football power in the late 1960’s and 1970’s as the Lions won two state titles (1969 and 1971) led by Utah Sports Hall of Fame coach Jim Durrant. The Lions also were also declared a co-state champion with three other teams in 1925 after two scoreless semifinals.

Utah County has some dominant football programs, but what schools have actually won state titles?

As far as coaches go, Utah County programs have some good ones.

By the way, Provo head coach Kirk Chambers led Spanish Fork ten seasons ago to its only appearance in a state title game, as the Dons lost to Dixie. And former Orem and Mountain View head coach Tyler Anderson, now calling the offense at Timpanogos, led Tooele to a state title in 2002. And Skyridge’s Jon Lehman, the only head coach in program history, took the Falcons to the state title game in only its second year of competition.