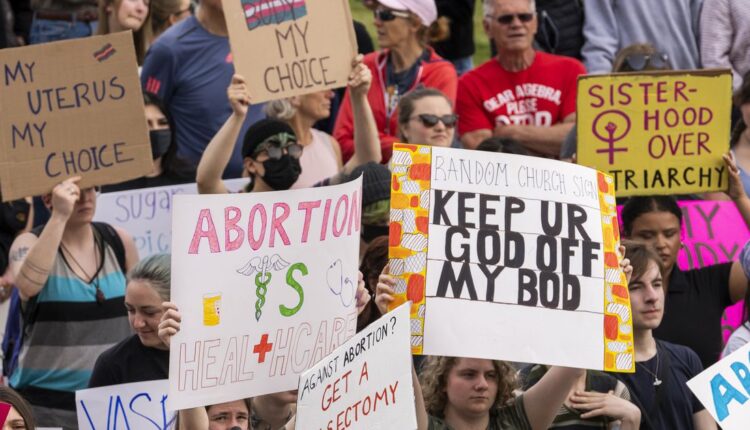 Utahns march in SLC in support of Roe v. Wade

Thursday’s rally was the second event focused on abortion and reproductive rights held in Salt Lake City this week.

(Rick Egan | The Salt Lake Tribune) More than one thousand protesters gather at the Capitol for a “Fight for the Right to Choose” rally on Thursday, May 5, 2022.

Hundreds of Utahns—mostly teenagers and young adults—attended a rally Thursday afternoon on the steps of the state Capitol in response to news that the US Supreme Court may restrict abortion access.

The speakers, some of whom were as young as 16, emphasized the importance of bodily autonomy and supporting Utahns in making their own decisions in their lives, while others shared their personal stories about abortion and sexual assault.

“The power is with us,” not the courts, one speaker said to a cheering crowd.

(Rick Egan | The Salt Lake Tribune) Hundreds of protesters march down State Street from the Capitol for a “Fight for the Right to Choose” rally on Thursday, May 5, 2022.

They called on political leaders, on both sides of the aisle, to take action. The crowd booed when speakers brought up Utah’s trigger law, which would ban most abortions in the state if Roe v. Wade is overturned.

Some attendees were dressed as characters from the book and Hulu series “The Handmaid’s Tale.” Many people held signs, some of which read, “Leave my uterus alone,” and “Am I a woman? Or am I womb?”

The crowd marched from the Capitol through downtown Salt Lake City to Washington Square Park chanting “My body, my choice!” Along the way, drivers honked their horns in support while people came outside of buildings to see what was happening.

Thursday’s rally was the second event focused on abortion and reproductive rights held in Salt Lake City this week. Another rally on Tuesday started at the Capitol before people marched in downtown Salt Lake City. Tuesday’s crowd reached about 1,000 people, but Thursday’s event drew more.

I’m at the Utah Capitol where there is a rally in response to the leaked Supreme Court decision this week.
They’re starting with a dance in honor of MMIWG day pic.twitter.com/xwvYPkW5qW

The Supreme Court will soon rule in Dobbs v. Jackson Women’s Health Organization, a case that stems from a 2018 Mississippi law banning abortions after 15 weeks of pregnancy, with some exceptions. The high court’s decision wasn’t expected to be released until June, or possibly July, before its session ends.

But a leaked draft opinion, published by Politico on Monday, gave a glimpse of what may come.

“Roe was egregiously wrong from the start,” Justice Samuel Alito wrote in the draft opinion on the 1973 landmark Supreme Court decision. “… It is time to heed the Constitution and return the issue of abortion to the people’s elected representatives.”

Chief Justice John Roberts confirmed Tuesday that the draft was authentic, but added that “it does not represent a decision by the Court or the final position of any member on the issues in the case.”

Becky Jacobs is a Report for America corps member and writes about the status of women in Utah for The Salt Lake Tribune. Your donation to match our RFA grant helps keep her writing stories like this one; please consider making a tax-deductible gift of any amount today by clicking here.