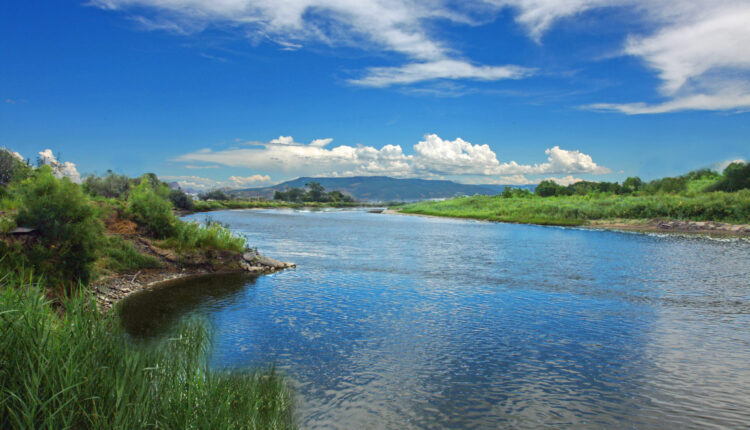 America’s western metropolises are thriving in the midst of the fiercest drought in over 1,000 years.

Not all climate change/global warming news is negative. Positive pushback to global warming is real and happening right under our collective noses.

Still, climate scientists wring their hands in despair over the failure of the corporate-controlled world to come to grips with climate change’s biggest bugaboo, which is too much fossil fuel emitting too much CO2 creating too much warmth that eventually brings on excessive heat. Ergo! Ecosystems fail! Droughts accelerate!

For decades now, scientists have been warning about the danger of too much fossil fuel causing climate system failure, like wet-bulb temperature-related deaths within 6 hrs. @ 95°F/90%H (India?), crop failures, rising sea levels, and scorching droughts. The broken promises of nation/states to “fix it” almost always turn to dust or result in too little, too late.

Yet, Hooray! Human ingenuity is alive and well. Adapting to record-setting drought in the United States is happening, especially in desert cities in America’s arid West, living proof that adaptation to a broken climate system is possible and likely for decades to come. The level of success is reason enough for some amount of cheer and good feelings. America’s western cities are taking on the worst drought in centuries and winning!

But, before looking behind the scenes of heroic efforts by some of America’s biggest cities, it is crucial to look at an all-points bulletin issued by the Bureau of Reclamation about critically low water levels at Lake Powell and at Lake Mead, which are responsible for hydroelectric power for millions and drinking water for 40M people in the West. Water levels at these two crucial reservoirs are dangerously low, calling for extreme measures years earlier than planned.

The Bureau had to pull off some gimmickry (hydrological accounting) for Lake Powell to continue providing hydroelectric power to millions of homes. Otherwise, the power was destined to end as water levels fall below intakes. Water levels at Lake Powell are at all-time lows. The Bureau of Reclamation, in order to keep both hydropower and drinking water for millions, had to employ gimmickry whilst “holding the hands” of seven (7) states that receive their water downstream from the Colorado River to Lake Powell and onto Lake Mead, which is also at all-time record lows going back to 1937 when Lake Mead first started filling up. This is heartbreaking evidence of the devastating drought throughout the West, which refuses to let up.

The Bureau’s gimmickry includes plans for Lake Mead to give up some water intake from Lake Powell to keep the hydropower on for millions of homes. The Bureau, in turn, is robbing water (162B gallons) from a recreational reservoir, Flaming Gorge Reservoir (Wyoming & Utah), to be sent to Lake Powell. This somewhat complicated transaction keeps the lights on for millions, although Lake Mead loses 480,000 acre-feet of water that Lake Powell normally sends its way. In the end, it’s hoped that spring snow runoff will compensate for the loss to Lake Mead?

The maneuvers by the Bureau include contingency plans that trigger mandatory water reductions for western states such as Arizona (-30%). As a result, farmers in the Phoenix area will have to fallow cotton and alfalfa fields. Most importantly, the accounting gimmick will allow the Bureau to avoid declaring a Tier 2b shortage as it artificially assumes (cooking the books) that Lake Mead did receive water from Lake Powell that it did not receive. As it happens, the Western states are already at Tier 1 shortages whereas a Tier 2b shortage would involve draconian cuts.

The short take on this convoluted affair is that America’s West is running out of adequate water supply in large measure because of an unrelenting drought that has all of the characteristics of a mega-drought. A megadrought is defined as a period of extreme dryness that lasts for decades. During a megadrought wet years do appear but quickly return to severe dryness. The current drought in America’s West has lasted for 20 years.

Along the way the big metropolitan regions have learned how to capitalize on those intermittent wet years in addition to smart measures to conserve and create more potable water. In remarkable fashion, they have learned to cope and are fighting back against the worst drought in recorded history, building adequate supplies of water, and in some cases, more than enough water, as the world surrounding these megalopolises containing millions of people turns brutally dangerously hot and dry. This exemplifies human initiative and ingenuity at work, and it promises to extend quality life in the desert West beyond the challenges of the worst drought in 1,200 years. It is something to behold.

San Diego, Phoenix, Las Vegas, Los Angeles, and Albuquerque in the face of the worst drought since William the Conquer (1028-1087) hit the shores of England are already working around the issue of federal cuts in Colorado River water, the first cuts in history.

The San Diego Water Authority recently did a water supply stress test that showed it is “water good” until 2045, and probably beyond. Similar results are happening in Phoenix, Las Vegas, and Albuquerque, all nestled within a drought apocalypse, but managing to create adequate supply of water to continue growing into the surrounding desert countryside. It’s a miracle of ingenuity, foresight, and dedication. It’s all about sourcing and conserving water.

YaleEnvironment360, an indispensable source for best coverage of the environment, recently published an article by Jim Robbins: A Quiet Revolution: Southwest Cities Learn to Thrive Amid Drought, YaleEnvironment360, April 24, 2022, stating: “From replacing water-guzzling lawns with native vegetation, to low-flow plumbing fixtures, to water recycling and desalination, to the shift of agricultural water to cities, governments in arid western regions are pursuing an all-of-the-above strategy.”

Moreover, nine (9) desert cities in the Colorado River Basin complex lowered water demand by 19% to 48% from years 2000 to 2015. These are testimonials to the value of conservation measures.

According to YaleEnvironment360: “San Diego has pursued a multi-pronged approach. The city now requires an array of water-saving technology in new homes, such as low-flow toilets and showerheads. Perhaps the single biggest piece of the conservation solution is paying homeowners to tear out yards full of Kentucky bluegrass and replace them with far more water-efficient landscaping. The city-run program pays up to $4 a square foot for as much as 5,000 square feet, and so far has replaced 42 million square feet of water-thirsty lawns.”

Per capita water usage for the San Diego County Water Authority has dropped from 235 gallons per day per capita in 1990 to 135 gallons per day now. That is an impressive change. Furthermore, the city captures 90% of rainwater runoff for additional supply to 24 reservoirs where it is treated to drinking water standards.

Oceanside, California, near San Diego, just opened a “toilet to tap” recycling facility that creates 3 million gallons per day or 20% of the city needs. Similarly, San Diego is working on a project for 40% of city water needs by recycling “toilet to tap.” San Diego is also home to North America’s largest desalination plant.

The metropolis of Phoenix took the number of single-family homes with lush landscaping from 80% in the 1970s down to 10% in 2022 as desert heat-tolerant plants replaced water-guzzling grass.

Los Angeles is beating the drought challenge with heavy investments in water storage, rainwater capture and reclamation with a goal of self-sufficiency of 70% of city water needs from local sources by 2035. LA mayor Eric Garcetti claims: “We’re going to have plenty of water.” (Source: Eckhouse and Bliss, Los Angeles Is Building a Future Where Water Won’t Run Out, Bloomberg, January 31, 2022)

According to Felicia Marcus, former chair of the California State Water Resources Control Board, who is now a visiting fellow at Stanford University: “The LA area is going to be the epicenter of climate adaptation in urban water in the world,” Ibid.

Work is already underway in LA with massive upgrades to wastewater treatment plants for potable water, spending $4.3B for the city’s Hyperion Water Reclamation Plant. LA will source 35% of the city’s water from recycling versus 2% today. Additionally, some of the world’s largest groundwater treatment facilities are under construction in the San Fernando Valley.

LA is currently expanding catch basins and inlets that recharge aquifers, and it is planning to double rainwater capture capacity over the next 15 years. That’s water that previously flowed directly into the ocean.

Conservation measures for LA started in the 1970s. Today, LA uses less water per capita than it did 50 years ago despite a population increase of one million. Water usage per capita has declined by more than 40%.

The Metropolitan Water District of Southern California has a record of 3.2 million acre feet of water in reservoirs, thanks to the foresight to overbuild storage reservoirs combined with conservation measures, all while working against the impact of the worst drought in over 1,000 years.

The state of California is moving to small-scale recycling. For example, in San Francisco, every commercial building over 100,000 sq. ft. has to use on-site recycling systems. Additionally, home water recycling units are coming soon, prompting some water aficionados to speculate that water utilities could end up with stranded assets or extra capacity.

Optimism about future stable growth in America’s West is directly tied to adapting to the rigors of a megadrought: “We know it’s a desert and we plan accordingly,’ said Arizona’s Kathryn Sorenson (Kyl Center for Water Policy). ‘Phoenix can survive dead pool’ — the term for a nearly empty Lake Mead — for generations. We have groundwater; we have done a good job of conserving and diversifying our portfolios. Desert cities are the oldest cities, and we will withstand the test of time.” (Source: YaleEnvironment360).

Utahns march in SLC in support of Roe v. Wade