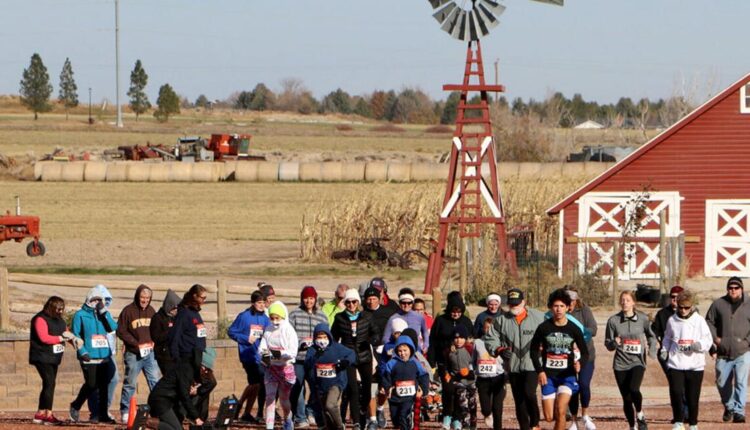 Chilly temperatures, strong wind gusts and even patches of snow didn’t stop dedicated runners and walkers from bundling up for the Warrior Run at Legacy of the Plains Museum on Saturday, Nov. 5.

“As my mom pointed out, the military doesn’t get to pick what weather they get to go into. I guess it’s kind of fitting that we got (bad) weather to deal with, but we’re doing something that supports them,” Dave Wolf, executive director at Legacy of the Plains Museum and event organizer, said.

The 14th annual Warrior Run is a fundraiser for the Veterans and Military Families Emergency Relief Organization that has offered a bridge to veterans and military families in emergency situations since 2007. Wolf said the organization has reached 300 families and veterans to the tune of $300,000, with proceeds from both runners and sponsors.

“I’m here primarily because of what Chris Wolfe, her son (Dave) and family have created with that emergency relief fund,” Matt Meyers, veterans service officer, said. “It’s huge for a lot of our veterans who are struggling.”

“When you’re dealing with some of the other organizations, they have to create the funding, but Chris can easily help out with funding within hours,” Meyers said.

Meyers said there have been around 15 instances where they assisted veterans with expenses, even when they were outside of the county.

Meyers served over 21 years in the Army, serving in special operations, and settled in the area about two years ago, shortly after retiring. In addition to being a service officer, he is devoted to volunteering his time to help veterans.

“I enjoy it. I try to do whatever I can. The VFW, American Legion, Dave with the emergency fund, really just wherever I can help a veteran, that’s where I want to be,” Meyers said. “There are a lot of challenges for veterans… I call it hero to zero. I went from an elite in the Army to a civilian and it’s a hard adjustment.”

Meyers was one of many volunteers willing to endure the weather and assure that the race ran smoothly. Western Nebraska Community College’s Upward Bound program and the Scottsbluff High School Honor Society brought several students and advisers out to man race entry tables, stations along the race route and hand out flags at the finish line.

“We appreciate their willingness to be here, and we have a lot of very dedicated sponsors that help us every year that believe in the cause. We’re just very grateful,” Chris said.

The race turn out may have been less than Chris hoped for but the enthusiasm for the cause made up for it.

“We’re running because it’s a good cause. We both have family that were in different branches, and we like the fact that 98% of the funds are used for veterans in this area,” Jeanne Ogden said.

Ogden, along with her husband and five children, traveled from Sidney to participate. The young kids were excited for the race to start and a few of them even planned on running the entire way.

“We’re all doing the 5K walking with the stroller. Our oldest daughter did cross country this year, that’s only a 3K but she’s been working on running for this,” Ogden said.

While the Ogden family and a few other runners were racing for the first time, many of the crowd were familiar faces.

“We’re very grateful for the ones that are here today since we didn’t really plan on this weather. We have a lot of dedicated repeaters that come year after year because of the cause; they want to help veterans and they believe in what we do,” Chris said.

One 5K runner said he speeded because he enjoys running and the cause.

“I started running and I like it and the cause,” Eli Marez said. “I’ve raced every year, three consecutively, for four years.”

“It’s been a good program. Every time I think about how long I want to keep doing this, and then I get a phone call from someone. There’s somebody (who) seeks some help and (shares) how grateful they are afterwards,” Chris said. “You go where you’re needed to do what you got to do.”

We’re always interested in hearing about news in our community. Let us know what’s going on!

Demolition for Provo House is complete