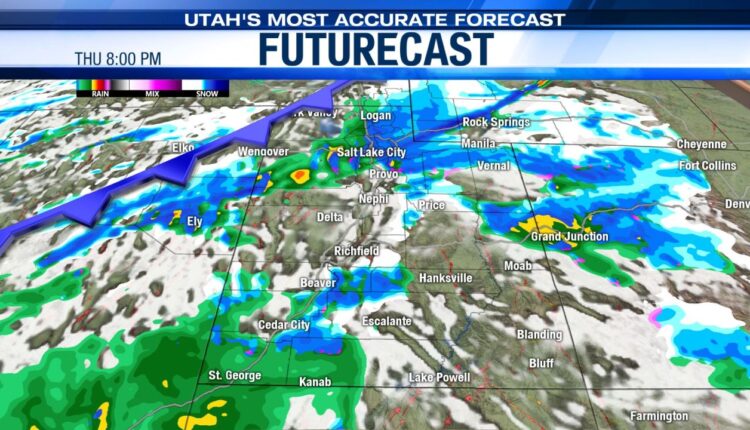 We are approaching the Christmas holiday weekend with great strides. Today our weather will bring many changes.

The first is a good chance as a strong south wind has broken the inversion and is making the haze disappear. This south wind has also warmed us up quickly so far and we will see heights along the Wasatch Front in the mid to late 1940s that are well above our average for this time of year.

In the south it will be 40s and 50s. The strong wind is caused by a strong winter storm that will pull today and tonight. The whole state has already seen spotty wet weather with valley rain and snow in the mountains. As the afternoon progresses, the wet weather will increase in both coverage and intensity. There will also be snow in the central and southern mountains while it will rain in St. George and Cedar City. If we pull through tonight and things cool off, snow levels will drop, probably as far as the banks of northern Utah. However, if we see periods of heavy rain that are possible, the snow could sink to some valley floors. This would most likely happen in Cache Valley, but it will also be possible along the Wasatch Front.

We have a winter storm warning in effect for our northern mountains around the Bear River Valley south to Wasatch Plateau / Book Cliffs. This warning also includes our mountain valleys in northern Utah such as the Heber Valley and Ogden Valley, and southwestern Wyoming. In the mountain valleys and southwest Wyoming, the amount of snow on Christmas Eve night can reach 5-15 ″ what the mountains can hold 1-2 feet! In remote areas, some mountains could get closer to 3 feet, while in mountain valleys 18 ″ is possible, especially between Park City and Kamas. Our central and southern mountains are 5-15 “most likely and they are included in the winter weather warnings for this storm. With this amount of snow at higher altitudes, this could make traveling extremely difficult or even impossible.

The wet weather will last until Christmas Eve and the depth of snow will rise again as we warm up to the upper 30s and lower 40s along the Wasatch Front. Overall, the wet weather seems to rejuvenate a bit from Christmas Eve to Christmas morning, especially in the valleys. Flying high remains possible and in some cases probable.

Temperatures don’t seem too different between Christmas Eve and Christmas Day, however a different system will bring even colder air with a better chance of snow for Christmas night in central and northern Utah through Sunday. We will continue the chance of snow until early next week while rain remains possible for St. George.