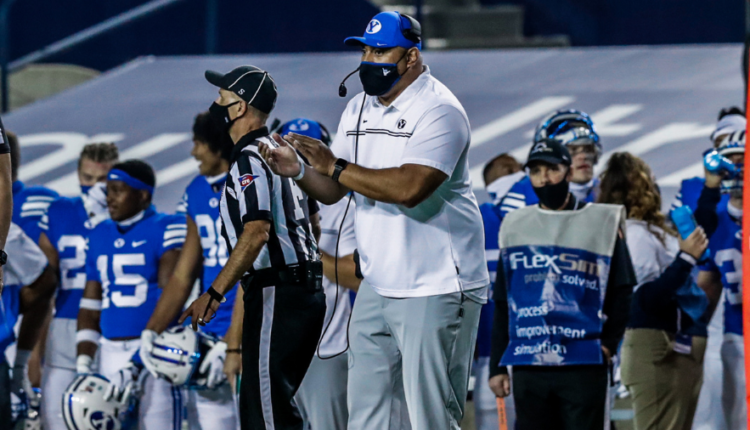 PROVO, Utah – Don’t forget that BYU football is just around the corner from the very start of your summer vacation.

In 100 days, the Cougars will open the eagerly anticipated 2021 season against the Arizona Wildcats in Las Vegas.

After an 11-1 season last year amid a one-time pandemic, BYU wants to expand this success for the sixth year under Kalani Sitake.

With 100 days to go, here are some things I can’t wait to see this season.

Fans back in the stands

When BYU announced last week that home soccer games would be at full capacity in 2021 was another sign of normalcy.

Watching games in person last year has been a historic experience I will never forget. But I missed seeing The ROC for a big game across LaVell Edwards Stadium. The power of Wasatch, which COUGARS expresses shortly before kick-off.

BYU has had its fair share of great quarterback battles over the years. The battle of 2021 could be the most competitive since the days of Jim McMahon and Marc Wilson, who vied for first place in the late 1970s.

Veterans Jaren Hall and Baylor Romney have shown their talents in limited game promotions while blue-chip recruit Jacob Conover stands ready to meet up with the veterans.

Power 5 teams on the plan

After COVID-19 destroyed BYU’s original 2020 schedule, the Cougars put together the best possible schedule. BYU could play 12 games, but none of those competitions were against Power 5 competitions. First time since 1975 on a BYU schedule.

This year, no one can knock BYU for its independent schedule. BYU competes against seven Power 5 teams, three of which are visiting Provo.

Independent planning has gone better than anyone could have imagined, but now people are starting to realize how balanced and in-depth the schedules can be as a FBS independent.

BYU Football introduces two new helmets this year. An all-royal and an all-navy lid. Player experience and equipment manager Billy Nixon did an excellent job of bringing together all of BYU’s different eras in their new uniforms.

Some may think it is an exaggeration to have a uniform reveal every week. I find it entertaining and look forward to the different themes that BYU will be wearing every Saturday this fall.

Every year one or two guys come out of nowhere to be key pieces for a specific BYU soccer team. Last year many would argue that it was Zach Wilson. But did anyone expect Tyler Allgeier to become one of the nation’s top running backs?

Who named Brady Christensen the next star in left tackle in 2018? What about 2007, when Harvey Unga beat Fui Vakapuna in number 1?

Unexpected stars appear every year. Who could they be this year?

My guesses as to who these guys might be this year are Enoka Migao, a true freshman on the defensive from California, and Miles Davis, who is running back in sophomore.

Connor Pay & Brayden Keim, two legacy players along the OL to keep an eye on this season.

The pay was excellent in the middle bowl game. Might be a starter in 2021.

I’m going to kick out another guy who I think might take off this year. Connor Pay. The pay was excellent for relieving an injured Joe Tukuafu at the Boca Raton Bowl who did not have an offensive line coach on the sidelines.

Can BYU raise the bar?

In my opinion, the 2021 off-season has many parallels to the 2007 season. How do you follow a breakthrough season with so many new faces in key roles?

In 2007 BYU found answers in Max Hall, Harvey Unga, Dennis Pitta, and Austin Collie. This team rose to another campaign with eleven wins, delivering what may be the last conference championship of the program.

The success of this season lived up to the team’s theme “Raise The Bar”.

The 2020 team brought back great hits to BYU football. However, was it a yearlong miracle because of the pandemic and a quarterback of the generation?

We will see. However, if this BYU team can win nine games against a schedule of seven Power 5 opponents, it would raise the bar and profile for Kalani Sitake’s future program.

We’ll get answers to these questions in just 100 days. For now, jump in the pool, enjoy the summer because the season will be here before you know it.

Mitch Harper is BYU Insider for KSLsports.com and moderator of the Cougar Tracks Podcast (SUBSCRIBE) and Cougar Sports Saturday (Saturday from 12pm to 3pm) on KSL Newsradio. Follow him on Twitter: @Mitch_Harper.