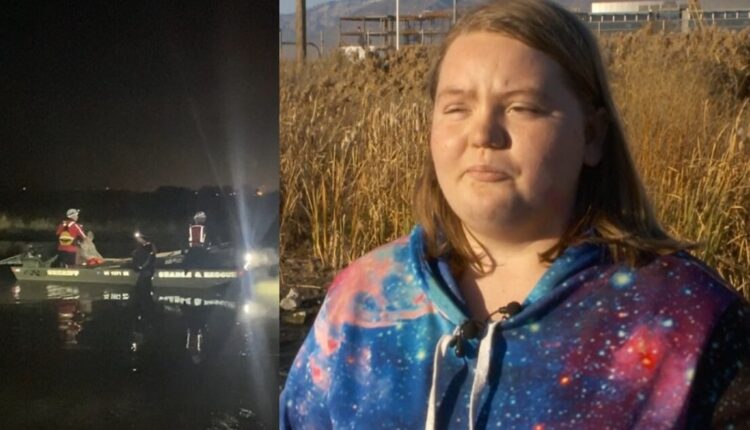 PROVO, Utah – A Utah County woman shares an intense experience after being stuck in the waist-deep mud of Utah Lake for two hours.

The woman is now sharing a message of caution for others who go on the lake.

A small gravel road off I-15 leads to a nondescript gravel boat ramp called the Mill Race Boat Ramp in Provo Bay. Despite the low key appearance, “it’s a very popular place to be,” said Sgt. Spencer Cannon with the Utah County Sheriff’s Office.

People put their boats in the water to fish or hunt for ducks or geese. Cannon explained that the canal from the gravel boat ramp to Provo Bay was narrow and deceptively shallow.

“From here it looks like, ‘Oh yeah, it’s easy, just follow that out there,'” Cannon explained. “But when you’re out there, it’s hard to know exactly where the main channel is.”

That was one of the challenges 19-year-old Autumn and her father faced while searching for ducks on Sunday. Autumn said they started in the afternoon and made it to Provo Bay. At one point she described how they got stuck in the shallow water and loosened the boat with an oar.

The two decided to turn around and walk down Mill Race to the ramp. But halfway through, said Autumn, she began to feel really tired because it was going slowly and they were fighting against the current and the shallow water.

Autumn asked her father if she could get out of the boat and walk the rest of the way back to the truck, thinking it looked like solid ground.

“As soon as I got out of the boat, I was already sinking,” said Autumn. “And I could pull my legs out to take another step and I just kept walking and was up to my waist. And I was like, ‘Dad, I’m stuck.’ I couldn’t pull myself out, it was rock hard around my legs. “

Autumn said her father tried to pull her out, but it was incredibly painful.

While waiting for the response from the Utah County Sheriff’s search and rescue team, Autumn said her legs and feet had gone numb. She wore only thin jigging pants and hunting boots.

Cannon said the hypothermia began as the crews worked to figure out exactly where Autumn was stuck. They launched an airboat as well as a mud buddy and finally found Autumn more than 90 minutes after she was cemented in the mud.

Getting them out was a challenge as Sgt. Cannon said the crews should be careful not to get stuck themselves.

“They dug around my feet, grabbed the bottom of my boot, and were able to pull it onto a back board,” said Autumn. She added that rescue workers could eventually pull her out and onto the boat.

From there, the group made it back ashore and loaded Autumn into an ambulance that drove to the emergency room.

“I was really scared because I couldn’t feel anything in my legs that I would lose feet or toes,” said Autumn. “But none of that happened and I’m so grateful that the rescue team can get me out in time.”

A few hours later, Autumn was released from the hospital and said she had recovered. She even made it to work on Monday morning.

For anyone coming to Utah Lake for fishing or hunting, Autumn and Sgt. Cannon urge people to stay in their boats and be aware of how shallow the water in the canals and around six to two feet high Reeds and the shoreline is.

Cannon said some areas only have two to three inches of water. As autumn now knows, the mud can be several meters deep.

“Always be careful,” warned Autumn. “You never know if you will get stuck, injured or break a leg and then be out there without a cellular network.