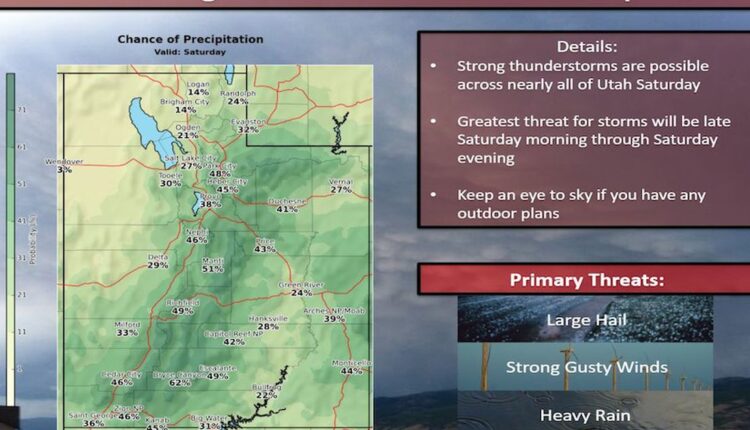 You’ll need a sweater on Monday when autumn temperatures hit

But first of all, rain, wind and hail are expected on Saturday.

(National Weather Service) Rain, wind, and hail are possible across Utah on Saturday.

Get ready to get your sweaters and jackets out of the closet. You will need them on Monday when it will feel positive across much of Utah.

(National Weather Service) Temperatures will be 15-20 degrees below normal in much of Utah on Monday.

If you’re looking for somewhere that still feels like summer on Monday, you need to head to southwest Utah, where it’s 87 in St. George and Zion National Park.

In the meantime, however, you should reconsider your outdoor plans for this weekend. On Friday afternoons and evenings, isolated showers and thunderstorms are possible in southern Utah, which can generate gusty microburst winds.

And on Saturday, a weak low pressure system will bring severe thunderstorms – with the possibility of large hail, gusty winds, and heavy rain – over almost all of Utah, according to the weather service. The biggest threat will be late Saturday morning through Saturday evening.

Salt Lake City has a 30-60% chance of rain during the day on Saturday and a 20% chance the night before midnight.

Will the fans at LaVell Edwards Stadium get wet for the BYU game for the second straight week? Maybe – Showers and thunderstorms are “likely” in Provo before 7:00 pm, and there is a “small chance” between 7:00 pm and 1:00 am (BYU-Arizona State game starts at 8:15 pm).

On Saturday evening in Ogden, where Weber State receives James Madison at 6 p.m., there is a 20% chance of rain

In the Salt Lake City area, expect temperatures in the mid-80s on Fridays and in the upper 70s and low 80s on Saturday and Sunday. That is before a cold front moves in and temperatures drop to the 40s on Sunday night / early Monday (with a 40% chance of rain, mostly before midnight) and the upper 50s and lower 60s on Monday. From Tuesday to Thursday it will be warm until the 70s.

After St. George peaked on Friday, expect temperatures in the high 80s and low 90s through Tuesday and mid 90s on Wednesday and Thursday.

The air quality is expected to improve somewhat. The Utah Department of Environmental Quality is forecasting orange / unhealthy on Friday and yellow / moderate on Saturday and Sunday for sensitive groups in Salt Lake, Utah, and Davis counties.

Other monitored counties – Cache, Carbon, Duchesne, Tooele, Uintah, and Weber / Box Elder – will be either green / good or yellow, and the forecasts for Washington and Iron counties are only green

Wayne’s fishing report is back!