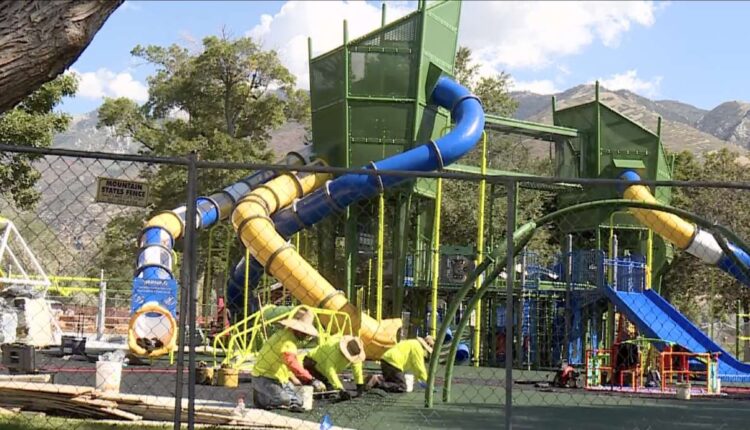 DRAPER — Excitement is building in Draper for the city’s new all-abilities playground, which is set to open on Oct. 18

“It’s not a cookie-cutter playground. There’s not one like this in the whole entire world,” said Rhett Ogden, director of Parks and Recreation for Draper City.

The $1.6 million playground is custom designed for Draper, with input from local children who use mobility devices.

“We ended up buying a playground piece from England because when doing our research, we learned it was some of the best stuff for wheelchairs and mobility devices,” Ogden said. “And even though it costs more, and we had to deal with shipping, and dealing with getting it through customs and the docks on the east coast, we finally got it shipped here to Draper, and we’re glad to have it, and it will be a great piece.”

Ogden had hoped to open the playground for Draper Days, but construction and supply chain issues have been challenging.

In the past week, crews working on the playground have faced yet another delay, this time because of visitors sneaking in.

“We did have reports of people, say, up to 50 people, that we actually called the police on last week. There were several adults, and children just out here playing on it like it was an open playground. They actually broke through the wood fence to get here,” Ogden says.

He says last week, a group of visitors damaged the new rubber flooring that was put down that morning on Friday.

“It looks great, and it looks like you can walk on it, but it’s really like cement. If you step on it before it’s dry and cured, then it leaves footprints, or it starts to crack, and you have to replace it, “Ogden said.

Ogden understands that people are anxious to visit the new playground, but he’s asking visitors to pay attention to the signs – and stay out – for now.

“We’ve also got our very last concrete pour today, hopefully,” Ogden said. “Please just stay out, and we’ll have our grand opening in about two weeks.”

Because of this issue, Draper City has put up more fencing, and more signage went up Monday, warning people to keep out. The city is also installing security cameras.

What happens if Lake Powell runs out of water?