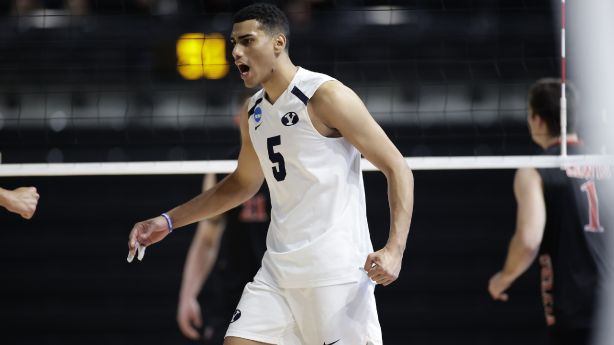 1 more: Gabi Garcia Fernandez has No. 2 BYU back in NCAA title match with 3-1 win over Lewis

The Puerto Rican international was too much for the Midwest’s best.

Davide Gardini added 11 kills and six digs and teammate Zach Eschenberg had 11 kills and three aces for the Cougars (20-3), who got six blocks from Felipe de Brito Ferreira.

Gabi sends the ball back to Provo

A year ago, BYU and Hawaii had just ended a season in the islands, a 1-2-team battle that barely allowed a separation between the two before the COVID-19 pandemic ended the season and forced players like Stanley. Eschenberg and Ferreira are returning for another year along with natural seniors like Garcia Fernandez.

A year later, the two teams are the last to stand – four NCAA titles total, but a drought in the championship that extends to BYU’s youngest in 2004. It was what was expected most in many ways – as the two were ranked No. 1 or No. 2 nationally throughout the year, earning the top two spots in the NCAA two weeks ago and well before that. Competition.

“Both teams, all teams, every child and everyone. What we’ve been through over the last year shows that we have great teams of a remarkable group of guys,” said BYU coach Shawn Olmstead. “We’re here now.

“Those were the last two games we played last year and both teams put together great seasons too.”

If Garcia Fernandez was the star, Stanley was the linchpin in the win. The senior setter from Hawaii, whose father Jon played the lead role before an Olympic career with the US national team at BYU, distributed double-digit kills to three different players and met Miki Jauhiainen and Felipe de Brito Ferreira 13 times in the middle to get the Flyers keep off balance.

“He’s a great setter,” said Garcia Fernandez. “He’s not getting as much recognition as he should, but he’s going to go down as one of the most legendary setters in this program.”

BYU setter Wil Stanley sets a pass for his teammates during the semifinals of the NCAA Cougars vs. Lewis tournament on Thursday, May 6, 2021 in Columbus, Ohio. BYU reached the title match with a 3-1 win over the Flyers. (Photo: Jaren Wilkey, BYU Photo)

Five-time All-American Ryan Coenen led Lewis with 13 kills, four digs and two blocks, and Tyler Mitchem added 10 kills and six blocks for the Flyers (21-3). Kevin Kauling distributed 37 assists for Lewis, who made 19 mistakes over the pins 22 mistakes from the service line.

“You won’t win games that make so many mistakes,” Coenen said. “Congratulations to BYU and Hawaii … we wish these guys the best of luck in the championship.”

Garcia Fernandez put in a kill to end a 4-0 run and move up 13:10 in the fourth set, and Gardini brought the Cougars to the verge of the final with a thunderous kill to win 21:19 before he with a 4-1 run, limited by the 22nd service error of the flyers of the game.

The soaring Puerto Rican has fired many shots with power, speed, grace. But that run, in which Garcia Fernandez simply toppled the block, showed another side of the AVCA All-American and two-time MPSF Player of the Year that even his teammates don’t always see.

“You can see the player develop over his years at BYU. He’s no longer about bombing. He’s a better player and can get those shots,” said Gardini, the son of Italian national legend Andrea Gardini, who studied has to fly in the net as soon as he could walk. “We can miss out on some things and try them out, but when the moment is right he’ll do some plays.

“It was fun to see him tip, I’m not going to lie. But it’s good to see him change the way he plays. I’m excited for him.”

The Cougars were nearly flawless in the first two sets, hitting 0.400 in the first set and keeping the Flyers at 0.125 percent in the second set, which dropped to zero with six kills and six errors. Lewis was kept on just one ace with 13 faults on the first 15 tries off the line before turning things around in the third set.

“Overall, I think BYU served the ball well and we had to do a better job from serve to reception to give our teammates a chance,” said Coenen. “We didn’t do that at the beginning.

“Then at the end of the game they started blocking balls. I made eight mistakes; that’s unacceptable … but they got into a groove block by block and made it really difficult.”

Keaton Long gave Lewis a rare mid-set lead with a kill to rise 16-15. But the Flyers never led by two points in the crucial third set until they sent a ball off the block well behind the service line for a 19-17 lead.

Gardini returned the lead to the Cougars with an ace from the top of the ribbon, 23-22. BYU battled three set points in the third but couldn’t fend off a fourth when TJ Murray and Kauling filled the third set at 28:26 to prevent the sweep.

BYU was down. It wasn’t outside, however.

“This is an awakening for the team and me,” said Garcia Fernandez. “It’s not just about serving, and I can do a lot more than that. I did my best and when it came down to it, I used my serve.

“When the time is right, it will come. The best athletes in the world stay stable and don’t worry about that.”

When All-American scores against Rado Parapunov .143 for the highest ranked Hawaii it usually means trouble for the Rainbow Warriors.

Not so much in the first semifinals on Thursday.

Parapunov had a team high of 12 kills and five blocks, and Hawaii stuffed the upstart UC Santa Barbara on their way to a 25-21, 25-18, 25-23 sweep of the gauchos at the Covelli Center.