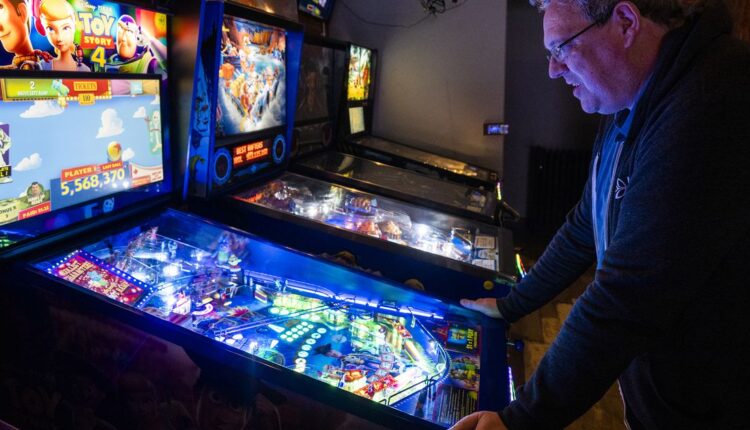 An Ogden bar spotlights pinball machines, both classic games and new ones

Ogden • Nate and Kristin Smith, the owners of Ogden’s Lit Arcade Bar, anxiously attended meetings of Utah’s liquor commission month after month, driving from Ogden to Taylorsville to wait with a queue of 15 or more bar owners also pleading for licenses.

By September, the couple had almost given up hope of getting a license, and worried they would have to sell off some of their vintage pinball machines to cover business losses. Then, in a special meeting on Nov. 17, the Department of Alcoholic Beverage Services’ commission — in a meeting via Zoom in which they spent less than five minutes to make a decision — handed Lit its license.

“We opened as quickly as we could,” Nate Smith said. “The liquor came in on Friday, and the beer was tapped on Saturday morning. We were open that Saturday night.”

Lit Arcade Bar, or LAB for short, is located at 2432 Washington Blvd. in downtown Ogden. The Smiths said more than a thousand people visited in its first week of operation, an audience that ranged from curiosity seekers to hardcore pinball players to people chasing nostalgia with the games of their childhood.

Lit is Utah’s third arcade bar. The first was Quarters Arcade Bar at the DLC, at 5 E. 400 South, in Salt Lake City, which opened in 2018. Its sister location, Quarters Sugar House at 1045 E. 2100 South, secured its liquor license in June.

Arcade bars are pretty recent to Utah, Smith said, “but they go way back in other places — like 10, 15 years.” (According to Eater, the earliest one surfaced around 2007 in New York City.) “We’re buddies with the owners of Quarters, buddies with the guy who owns Utah Pinball, and has 55 machines that he owns,” Smith said. (Lit has 45.).

Smith pulls up an app on his phone that’s like a Google map for pinball machines all across America — whether it’s a huge bank of them inside an arcade bar in New York City, or some hard-to-find vintage pinball game in the corner of a laundromat in Peoria, Ill.

It’s crowdsourced, he explained, with map pins that give an address and list the games a venue offers. “When I travel to a new city for business — let’s say I’m going to Denver — I search, and it tells me where all the pinball machines are,” he said.

Lit’s games are on that map, too. Smith said he started collecting pinball machines close to a decade ago as a passionate hobby before he thought about parlaying that into a business. For a spell, the collection lived in the Smiths’ home basement.

Lit’s collection spans decades, from a 1967 machine to brand-new computerized pinball machines themed around “Stranger Things” and “Rick & Morty.” It also has a four-player Pac-Man arcade game that, like “Stranger Things,” is a newly minted creation that pays homage to the 1980s.

The most popular game, though, doesn’t use electricity. It’s a tabletop bubble hockey game where players manipulate goalies, wingers and defenseman attached to rods, battling it out with a dime-sized, free-flying puck.

Smith said people also love Big Buck Hunters — which is not a huge surprise, considering how many people in Utah grow up hunting.

The bar offers four vintage Skee-Ball lanes, and 50 different pinball machines from different eras, including ones themed around the band Iron Maiden, the Hot Wheels toy cars, and the old “Twilight Zone” TV series. There also are arcade video games, including Centipede, Donkey Kong and Ms. Pac-Man arcade games — as well as a small lounge area where people can play board games, Nintendo or Sega Genesis.

(Rick Egan | The Salt Lake Tribune) Skee-Ball and a four-player table model of the Pac-Man arcade game at Lit Arcade Bar, in Ogden, on Thursday, Dec. 15, 2022.

The bar carries Modelo as well as local beers like Kiitos, and also brews up theme cocktails including The Slam Tilt, Ms. Pac-Man and Wizard Mode (which features tequila, Sprite and Blue Curacao). It also serves a simple bar menu, with such dishes as chicken tenders and fried okra.

Some, but not all, pinball machines are outfitted with video screens where people can watch gameplay on Twitch or social media. And all the games are outfitted with a small panel that scans payment off a card people buy at a kiosk that they can pre-load with game credits. That decreases the nostalgia a bit, Smith said — no quarters to drop — but it was a lot easier for both customers and the bar to not have to juggle spare change all night.

The one exception, he said, was Lit’s oldest game, made around 1967. It’s free to play because outfitting it with a digital panel wouldn’t just ruin the aesthetic, but would be technically tricky, because “you have to pull 12 volts of power . This game wasn’t designed that way,” Smith said.

Called “Gottlieb’s Melody,” the game features a wood base and lightbox made with etched glass showing a street scene with carolers, including a quartet of ladies in fancy hats and a group of college students in letterman jackets. Manufactured by D. Gottlieb & Company in Chicago, it’s one of only 50 pinball machines of its type left in the world.

One of the reasons for the scarcity is that pinball was illegal in many major cities, including New York, between the early 1940s and the mid-1970s.

“There are famous pictures of [New York] mayor [Fiorello] LaGuardia, smashing pinball machines with sledgehammers,” Smith said. Pinball machines were considered gambling devices, rather than games of skill. That point of view has shifted radically since those days, so much so that there are now national pinball championships and conventions.

“[So] this was manufactured when they still weren’t legal [in some places],” he said. “In Utah, there was a kind of closet underground of people collecting, you know, because it’s pinball, and it’s always kind of been counterculture.”

Smith said most pinball collectors — or “pinheads” as they’re sometimes called — find machines on pinside.com, “which is kind of like Ebay for pinball machines,” he said.

Both Nate and Kristy, as well as their son and daughter, have competed in pinball tournaments — they’ll be headed to one as a family on Jan. 19. Last year, Kristy organized a Utah women’s chapter of the International Flipper Pinball Association, because she wanted to play with other women and give them a chance to play pinball in a supportive, non-threatening environment.

“I just started putting some feelers out there,” she said. “I posted a couple of non-sanctioned women’s tournaments to see what the general interest was, and it just started to take off,” she said.

The chapter now has 44 players, Kristy Smith said, and will be hosting the first women’s Utah championship series in January. “For me, I just wanted to build community,” she said.

Nate Smith said in the same vein, Lit wasn’t just a business, but a place to grow a larger community around games, and attract out-of-towners who love pinball.

“Some people come just for the atmosphere. Some people come for the specific game,” he said. “It’s just the intersection of all things nerd. We’re actually going to host Dungeons & Dragons in the back room. … It’s got the perfect haunted mansion feel,” he said.

“We just want to give people a little shelter from the storm, if you will,” he added. “We’ve had as many as 500 people in here in one day. Our record is 502 — but I’m hoping to break that record. Hopefully tonight!”