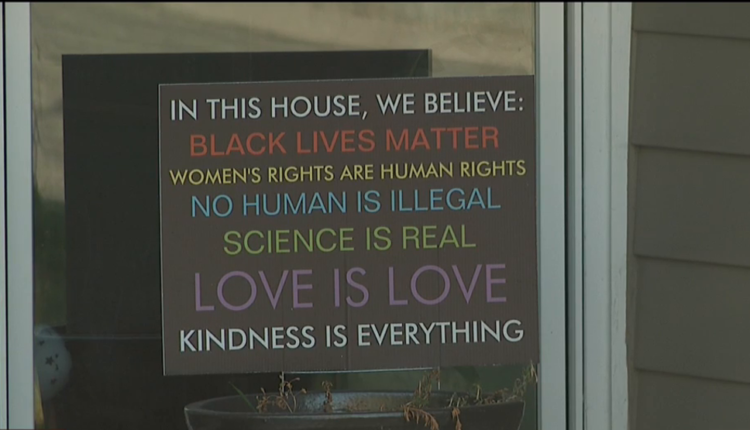 An anonymous letter had been sent to people across the Salt Lake Valley with Black Lives Matter signs in their yards.

The letter, which has been around the area for at least a couple of weeks, accuses homeowners of being anti-American and anti-police and encourages them to move to a communist nation.

“It was pretty shocking to read. When I first read it, I thought it was a joke, ”said Jason Lukasek, who got the letter in his mailbox on Monday.

The franked envelope has the word ‘Friend’ handwritten on the front, but no return address.

The first line of the letter reads, “Your support for communism and anti-American Marxist groups like Black Lives Matters has been noted by the freedom-loving patriots, police and military in the area.”

Lukasek has a small BLM sign in his yard.

“It’s a very minimal BLM message,” he said. “It’s just a very small corner, and it just basically means that we’re a household that welcomes everyone, whoever you are. Even if you see things differently than we do, we still respect you as a person. “

The letter further accuses the recipient of not being educated about the origins of the BLM organization and ends with the statement that if he does not change his mind he should move to one of the many existing communist nations.

Jason’s wife is Vietnamese and he said they were aware of the intent of such a letter but said that he would not intimidate them.

“You can imagine where that moves us a little – makes us pause to think about what the people out there might be thinking,” said Lukasek.

Lukasek posted the letter on a social media forum. At least half a dozen people said they received the same letter, which no one signed.

Jeanetta Williams of the NAACP Salt Lake Chapter said whoever wrote it should stand by it.

Williams said the letter posed no direct threat, but families shouldn’t be scared or targeted.

“I can have a Blue Lives Matter and a Black Lives Matter sign in my yard, but I don’t want someone targeting me to tell me I can’t have either,” she said.

Officials said the letter is considered free speech, so there is not much the police can do other than track the patterns of where these letters are being sent.

Lukasek said he notified the FBI Tippline and misplaced his sign but had no intention of removing it.

Messages for comment from Black Lives Matter Utah were not returned immediately on Tuesday.

Analysis: Don’t Want a Vaccine? Be Prepared to Pay More for Insurance.