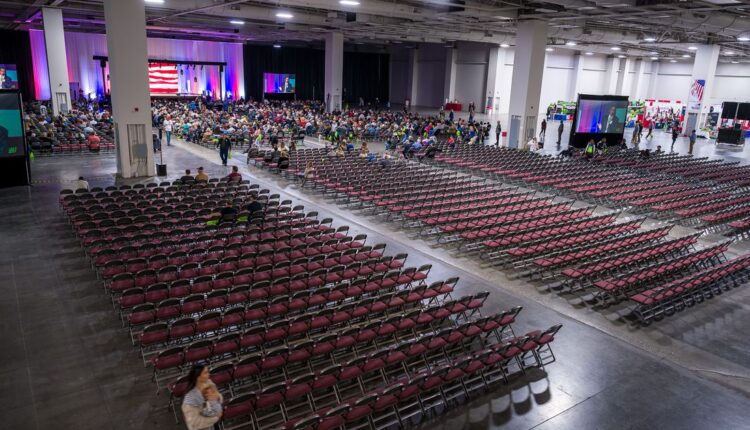 A conspiracy and religious political conference in downtown Salt Lake City drew about 1,000 attendees to the Salt Palace Convention Center on Friday. People there heard from some of the leading far-right political figures, including retired Army Lieutenant General Michael Flynn and former Overstock.com CEO Patrick Byrne.

The Western Conservative Action Network or WeCANact event was created as a place to learn how to fight “against socialist, communist and Marxist ideologies” in government, schools and the media. The event focused on that promise, but also featured a large portion of misinformation about COVID-19, vaccines, and the 2020 elections. And to top off the political fringe, there was plenty of evidence of the QAnon conspiracy theory.

The organizers initially hoped to sell 10,000 tickets or more for the two-day event in Salt Lake City. They lagged far behind with fewer than 1,000 participants on Friday.

The keynote speaker was former National Security Advisor Michael Flynn, who was fired just weeks after being appointed by former President Donald Trump. Flynn was a central figure in post-election efforts to overturn the 2020 vote, suggesting that Trump is imposing martial law on several states to force a re-vote. Flynn recently proposed a coup in the United States

The falsehoods and half-truths flew fast and furiously on Friday.

A popular target for speakers has been the COVID-19 pandemic and all the protective measures that have been put in place to stop the spread of the virus that has killed more than 720,000 Americans.

“Masks are the new swastikas. You’re wearing a mask to show you’re going to give in to fear, ”said Doug Billings, who hosts the online show The Right Side with Doug Billings.

Clark also said remdesivir was responsible for killing hospitalized COVID-19 patients for causing kidney failure and that it was funded by frequent right-wing boogeyman George Soros. The fact that President Donald Trump received the drug when he was hospitalized with the virus last year remained unspoken.

Several speakers said the COVID-19 vaccine contains nanotechnological graphene oxide (not true) or fetal tissue (it was developed from stem cell lines from aborted fetal cells but does not contain any fetal material).

The number of COVID-19 cases and deaths has also been called into question. Speakers suggested that COVID-19 tests be calibrated to exaggerate the number of infections that would then be used to trick people into taking the much hated vaccine.

Aside from COVID-19, there were other well-known topics of conversation.

Quite a few speakers labeled whatever they saw as the enemy as communist or Marxist.

Leigh Dundas, who cheered the crowd that attacked Congress during the January 6th uprising in the U.S. Capitol, warned the crowd that a plan launched by former Soviet Prime Minister Nikita Kruschev to replace the U.S. government with a communist dictatorship was breaking out comes into play.

Much has been said about the non-existent election fraud that fueled former President Donald Trump’s false claims that his election was stolen.

Former Overstock.com CEO Patrick Byrne, who spread his fantastic theories about hacked voting machines, led the audience through his “deep rig” theory about electoral fraud. Byrne was part of a post-2020 White House meeting where he and others called on Trump to overturn the election results. He is also being sued for $ 1.6 billion by Dominion Voting Systems for alleging their machines rigged the voting for Joe Biden.

Arizona State Senators Wendy Rogers and Sonny Borrelli, who became known during the partisan-led Maricopa County’s election results review, were on hand to advance the “big lie” about electoral fraud.

“The 2020 election was a shameful moment. We have to take our country back, ”said Rogers.

Utah MPs Steve Christiansen, R-West Jordan, and Phil Lyman, R-Blanding, are pushing for a similar review of the 2020 election results in Utah. Both men will speak at the conference on Saturday.

The right-wing political conference also made several references to the QAnon conspiracy theory.

The opening prayer asked for God’s protection from a “satanic cabal”. A central belief of QAnon is that the world is ruled by a global child-smuggling, Satan-worshiping cabal. The opening prayer also referred to attendees as part of the “Great Awakening,” which is an open reference to QAnon’s belief that the mass arrests of government officials are imminent.

While it is easy to poke fun at many of the statements made by the moderators at Friday’s conference, there is great danger lurking behind their claims, according to Travis View, co-host of the QAnon Anonymous podcast.

“The speakers on the stage echoed the kind of harmful misinformation that online conspirators often amplify. It is unfortunate that the speakers appealed to the faith and patriotism of the audience to deliver a message that makes parents unnecessarily paranoid, endangers physical health and harms the health of democracy, ”said View.

The conference is to continue on Saturday.