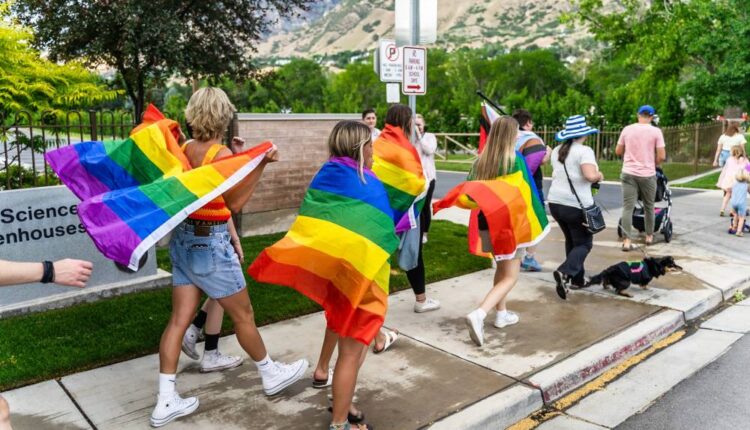 More than 1,000 people gathered in Joaquin Park in Provo, Utah on Monday (June 28) to support the LGBT + event. The group included current and past students, members of the LGBT + community in the area, allies, and even some furry friends.

The protesters waved kaleidoscopic Pride flags and signs proclaiming “Love is the answer”, “You are loved” and “Hate has no home here”. Many danced along to festive music during the event, and there was even a “Free Britney” banner on the march.

The Pride march was not officially sponsored by BYU, owned by The Church of Jesus Christ of Latter-day Saints. Instead, it was organized by a completely anonymous online group called BYU Pride. The group “aims to empower students to celebrate the advancement of the LGBTQ + community at BYU and to advocate change through collaborative activism,” according to their Instagram account.

One of the event organizers, Kendra, told The Salt Lake Tribune that she and others teamed up to start the Instagram page and event to show their support for the LGBT + community in the area.

But she said she never expected the huge turnout from people who showed up at the BYU Pride event.

“We are here [in Provo and BYU], and we are proud to be here to support people who find themselves in a difficult and strange place with their sexuality, ”said Kendra.

Stacey Harkey, speaker at BYU Pride and a graduate of the university, told them it was “an absolutely exhilarating experience” to see so many people show their pride and support for LGBT + people.

“I expected there would be a lot fewer people, and when I got to countless people supporting me, it gave me so much hope for the future of the queer community,” said Harkey.

“I worry about the queer children and young adults growing up in intensely religious communities, but this turnout lets me know that things will change and it will be different for them.”

Sources told them that the organizers of the event wanted to remain anonymous to avoid retaliation from the administrators.

LGBT + students have experienced a number of ill-treatment at BYU

Students can be expelled if they do not adhere to the university’s strict code of honor. In 2007, BYU changed the code to allow students to openly identify themselves as gay.

In May, a professor in BYU’s religious department faced a determined backlash after using a Mormon term associated with an antichrist to describe a gay student on Twitter.

Hank Smith, an assistant professor, referred to the LGBT + student as “Korihor,” who is a false prophet and antichrist in the Book of Mormon. He later deleted the controversial tweet and apologized on the grounds that his response was “unjustified and unfair”.

Temperatures will be “dangerously” high in Utah.