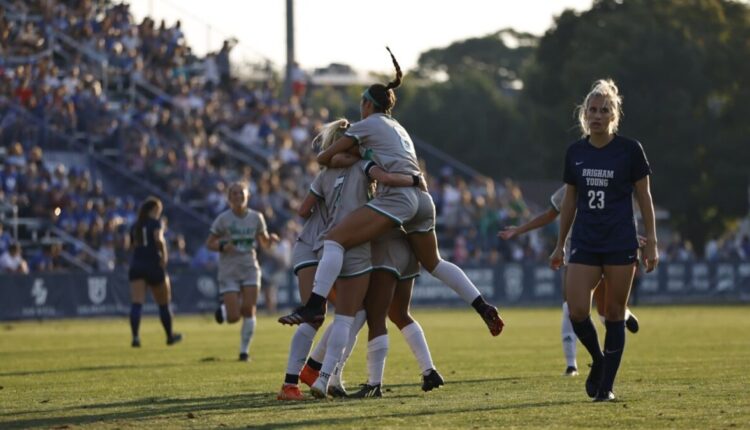 UVU women’s soccer players celebrate after the game against BYU in Provo on Saturday, Sept. 10, 2022.

The Utah Valley women’s soccer team scored three goals in the first half and another in the second to defeat No. 13 BYU 4-2 in a UCCU Crosstown Clash match on Saturday night at South Field in Provo.

The win over the 13th-ranked Cougars is the highest nationally ranked opponent that UVU has ever beaten, surpassing its win in 2021 over No. 25 Memphis in the NCAA Tournament. The win is also its first win over BYU in program history. The Wolverines did tie no. 23 UCF 0-0 earlier this season at Clyde Field.

“I couldn’t be prouder of the effort the team put in,” said Utah Valley head coach Chris Lemay. “I thought they executed the game plan well. I thought we took our chances. Obviously, we were up against a very good side in BYU. We knew that it would take everything that we had. We showed up and we gave it everything for a full 90 minutes. The result was fair and well earned.”

Utah Valley improves to 4-1-2 overall with the win while BYU falls to 3-2-2 on the season.

BYU struck first in the fifth minute after Brecken Mozingo kicked a left-footed shot into the upper 90 to give the Cougars an early 1-0 lead.

Utah Valley’s Hannah Lee scored the equalizer in the 12th minute after a free ball was rebounded by Jenna Shepherd. Shepherd one-touched the rebound to Lee who fired it off the far post and into the back of the net from about 20 yards out to tie the game 1-1.

Julianna Carter took the ball on the right side of the box and moved it to Lee who immediately passed it to the top of the box to Stainbrook. Stainbrook fired a shot with her left foot past the BYU keeper on the left side and into the net to give the Wolverines a 2-1 lead.

With just seven seconds to go in the half, Kathryn Wynn sent a corner kick into the box where Sydney Bushman headed it off the post. Isabella Steward then cleaned it up by heading it across the line to give the Wolverines a 3-2 lead at the half.

Julianna Carter dribbled down the right side of the field and then split a pair of BYU defenders just inside the box and then fired a shot past the BYU keeper and into the back of the net to extend UVU’s lead to a 4-2 advantage.

No. 10 BYU women’s volleyball dropped its third straight match of the season to No. 8 Ohio State (25-19, 25-16, 27-25) at O’Keefe High School as its Georgia Tech Classic competition concluded on Friday.

Facing three Top 10 opponents in a one-week span, the Cougars have dropped three straight for the first time since the 2010 season when BYU lost eight consecutive matches.

Kazna Tanuvasa had a season-high 16 kills, as three other Wolverines added ten or more kills in the match. Abbie Miller and Natalie Palmer combined for 50 assists in the victory. Northeastern (3-6) kept the final two sets close, but UVU closed out the sets for the victory.

U-Talk: What are you doing to stay cool during this record-breaking heat? | News, Sports, Jobs

While Inflation Takes a Toll on Seniors, Billions of Dollars in Benefits Go Unused