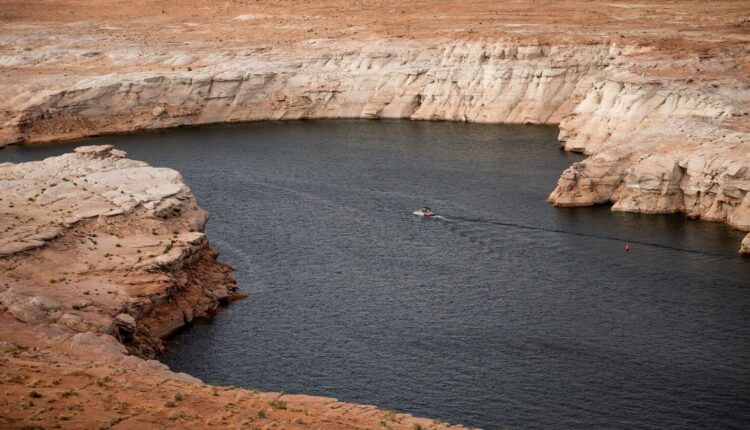 Can Lake Powell be drained? Different solutions to western drought

Basking in the sunshine on a boat at Lake Powell is the quintessential backdrop for a perfect summer getaway.

The human-made reservoir straddling the Utah-Arizona border has been a beloved destination spot that has spanned generations for many families. The glistening green waves against red rock canyons is home to many summer memories — but also to one of the nation’s greatest water reserves.

The sheer enormousity of the lake arising out of a desert in the West is not only spectacular, but it’s in jeopardy.

The blue-green water levels are getting lower and lower each year, raising questions about the future of the lake for tourism and recreation as well as generating hydroelectric power.

Futures and fortunes depend on Lake Powell

As a power generator, Lake Powell is a crucial key to the West’s future.

According to the National Park’s Service, the water supply has supported the development of Page, Arizona, and in 2019, Lake Powell brought in $502.7 million in economic benefits for the community.

The report also stated that Lake Powell had a $42.5 billion cumulative benefit to the US economy. Despite those numbers many groups entertain the idea of ​​draining the lake all together.

The announcement to reduce the amount of water released from Lake Powell back in May fueled urgency to find long-term solutions. As water levels continue to drop, the future of Glen Canyon is a topic of controversy among many people across the nation.

What is at stake?

Operating guidelines for the Colorado River by the US Bureau of Reclamation are due in August, which will inform management of the river in 2023 as well as the nation’s two largest reservoirs, Lake Mead and Lake Powell.

Tanya Trujillo, the Interior Department’s assistant secretary for water and science, said there’s no time to waste making decisions about the Colorado River and Lake Powell.

“We are taking extraordinary actions today because now is the time to do more,” Trujillo said in May.

Many share that urgency. Eric Balken, executive director of the Glen Canyon Institute, wrote in the May issue of Deseret Magazine that time is running out before Utah and other states that rely on Glen Canyon Dam could be dealing with a Lake Powell that generates zero hydropower.

Low water levels are pictured at the Wahweap Marina in Lake Powell in Wahweap, Ariz., on March 28, 2021.

Though the idea to drain Lake Powell has gained traction among activist groups, the reality is protections are in place, and the lake’s water level will only drop if the drought brings it down naturally.

Trujillo explained the need to leave water in Lake Powell in a letter sent to all seven Colorado River Basin states: Colorado, Wyoming, Utah, New Mexico, Nevada, Arizona and California. The dam produces power for more than 3 million people, and draining water from Powell would impact those people in many ways, according to Trujillo.

“In such circumstances, Glen Canyon Dam facilities face unprecedented operational reliability challenges, water users in the Basin face increased uncertainty, downstream resources could be impacted, the western electrical grid would experience uncertain risk and instability, and water and power supplies to the West and Southwestern United States would be subject to increased operational uncertainty,” Trujillo wrote.

CNBC reported that all seven states agree that some action needs to be taken, but Utah is among four states that presented a plan to raise water levels by releasing 500,000 acre-feet of water from Flaming Gorge Reservoir in May.

Releasing more water into Lake Powell would buy the US Bureau of Reclamation and water managers in the basin more time, but according to Bart Miller, program director of the Western Resource Advocates, the benefit is short term and there now needs to be a focus on long term solutions.

The Bureau of Reclamation reported that due to Lake Powell’s benefits, Congress continued to forbid the use of any public funding in planning or actions that would go toward draining Lake Powell.

“Previous administrations of both political parties, as well as the US Congress, have said that Glen Canyon Dam is here to stay because it is serving millions of people in the Southwestern United States,” John W. Keys, former commissioner of the Bureau of Reclamation, said in an action planning committee regarding the lake in 1996. ”Congress, through the passage of the Grand Canyon Protection Act of 1992, clearly stated that the dam and reservoir have a place in the tapestry of the country.”

The Bureau of Reclamation has committed to operating Glen Canyon Dam in accordance with the Law of the River, the collection of documents regarding regulations around the Colorado River, and all pertinent environmental laws.

People walk at Lone Rock Beach on the shores of Lake Powell in Glen Canyon National Recreation Area in Utah on March 26, 2021.

The argument for draining Lake Powell

The idea of ​​draining Lake Powell is still popular among activist groups throughout the country despite the protections in place.

The Grand Canyon Trust proposes draining Lake Powell to transfer its water to Lake Mead in the hopes that Lake Mead’s environmental advantages would help it retain the water better. The project has been dubbed “Fill Lake Mead First.”

Two years ago, the Glen Canyon Institute published a peer-reviewed study that showed storing water in Lake Mead rather than Powell would save 300,000 acre-feet of water or more per year. The study claims that more water evaporates from Lake Mead because of its hard rock shores and greater surface area, while Lake Powell loses water as it seeps into its sandstone banks and falls through into underground aquifers never to be recovered.

One concern with draining Lake Powell is that the canyon would be ruined from the sediment buildup, but Glen Canyon Trust argues that canyons do restore themselves. The trust points to evidence in areas like Cataract Canyon, Escalante River and Hole in the Rock, where Lake Powell used to reach.

The Glen Canyon Dam is pictured in Page, Arizona, on March 28, 2021. The Dam blocks off Lake Powell’s waters for Southern California to use.

The need for long-term solutions

It’s no secret that Lake Powell levels have been low for years. It took 17 years to fill after the completion of the Glen Canyon Dam in 1963 and stayed full through the end of the century. In the early 2000s, a course of dry winters started diminishing the water supply from nearly 100% capacity down to 34% in five years.

In May, Lake Powell crossed the 3,525-foot hydropower buffer mark, which is about a hundred feet from the level where water can no longer be used to generate power.

The Bureau of Reclamation’s projections show Lake Powell could sink past levels where power can’t be generated. The recent projections say it could drop to “dead pool,” the lowest water level authorized by the dam’s river outlets. More than 40 million people rely on water from the Colorado River Basin and even more rely on the beautiful scenery for vacations, exercise and livelihoods. 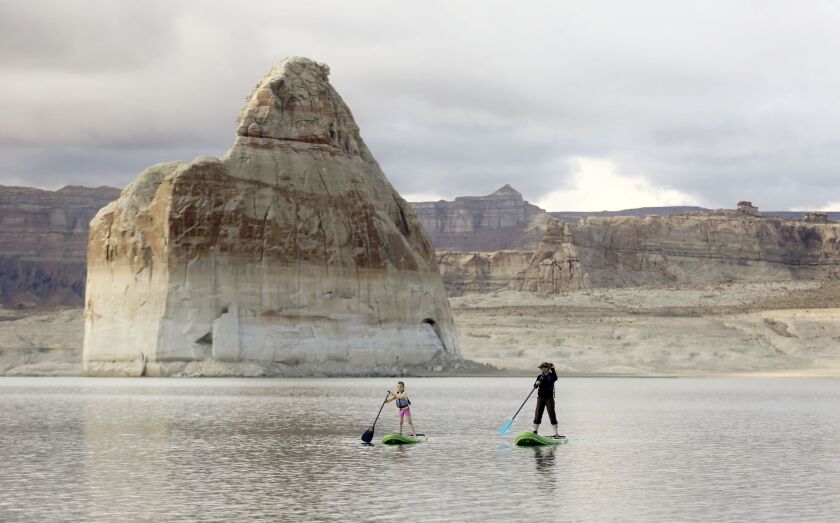 Edyth Hanford and her mother, Melody Hanford, paddleboard in the Glen Canyon National Recreation Area at Lake Powell in Utah on March 27, 2021.