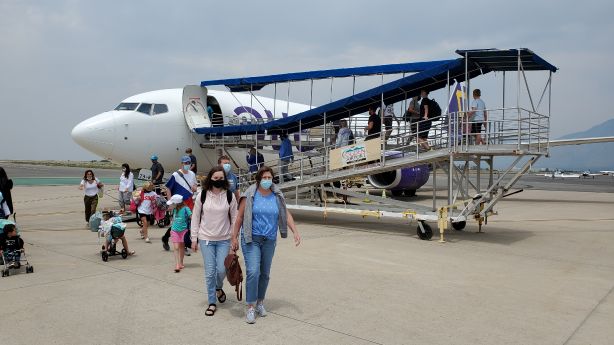 OGDEN – Avelo Airlines hit the headlines in Utah when it announced $ 19 fares from Ogden to Burbank, California.

We took one of these introductory fares (they’re gone now) and can tell you what it’s like to fly from Ogden on a low cost airline.

First, the price: they don’t keep you stuck with hidden fees. If your ticket says it costs $ 49, it will only cost the luggage, which is another story. Hand baggage is an extra $ 25 and checked baggage is $ 20. Pay this in advance or you will be charged an additional $ 10 to pay upon check-in. The fee applies per flight, not a return flight. At these rates we were still ahead.

With a decent parking lot, we went 180 steps to the terminal which is small and easy to pass through. Arrived an hour before departure, we immediately went through security, waited another 10 minutes in a waiting area and then started boarding. There are no passenger boarding bridges, so head onto the tarmac, up a series of handicap-accessible ramps, and onto the Boeing 737-800. It’s a higher entry, but it’s not a small regional plane.

Avelo does not have premium, platinum, platinum plus, platinum exalted awards, or the treasure trove of “privileges” airlines give passengers so that those in the front of the plane get on first. Avelo gets on in zones that start at the back of the cabin, which made boarding faster than anyone we’ve ever seen. Carry-on baggage charging disappeared the scene in which passengers were pacing up and down the aisle trying to stuff a large carry-on suitcase into an overhead locker. Everyone just got on the plane and sat down. We had to wait for the baggage handlers because we sat down so quickly. The flight attendants were professional, courteous and in uniform. During the announcements, we learned that Avelo is pronounced “uh-VAY-loh”.

Waiting for luggage at the entrance to Ogden Airport. (Photo: Brian Champagne)

Once in the air, flight attendants handed out a sealed package containing a towel, 8 ounces of Niagara water, and a Lorna Doone biscuit. What the food lacked in glamor it made up for in speed. The flight attendants used a tray with an open cardboard box as opposed to a drinks cart that smacked their elbows and didn’t have to wait for each passenger to decide to have a snack.

The flight took an hour and 50 minutes in the sky and landed at one of the easiest airports to get to. Suitcases arrived at the baggage claim at typical speed.

Hollywood-Burbank Airport is likely closer to your destination in the Los Angeles / Southern California area. Parking shuttles are easy to find and catch.

On the return flight from Burbank, Avelo had two ramps to board the plane from the front and back of the plane at the same time. Baggage claim in Ogden took longer, but was delivered in the overhang area in front of the terminal. There seemed to be enough cover for bad weather days.

Any cheap tariff with enough add-ons is no longer cheap. You should be able to share a suitcase with your travel companion, which will reduce this overhead. Bag abandonment wasn’t bad and Avelo allows small backpacks or laptop bags in your seat for no charge.

Parking at Ogden Airport is $ 5 for the same walking distance that you would pay $ 55 for at Salt Lake International, although SLC Economy is $ 10 a day with a shuttle ride. If you live near or north of Ogden, you’ll save an hour’s drive.

To sum it up, not only is Avelo cheaper, which can get your budget manager’s attention, but some of its cost reductions also make it a lot faster and less of a headache. It’s worth checking that their schedule is up to yours.