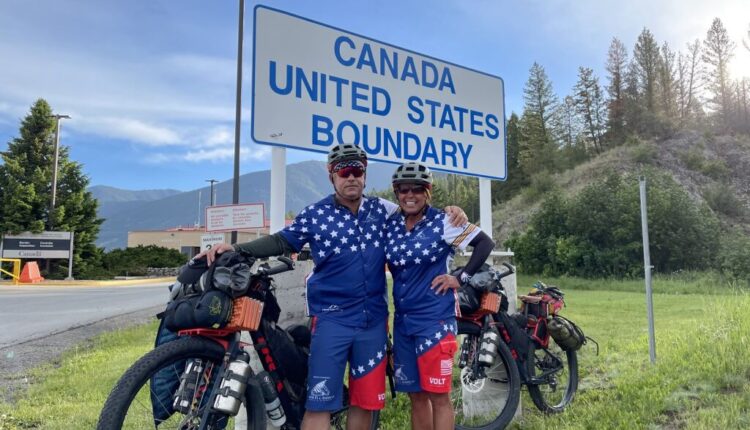 Dean and Lorri Zenoni from Salt Lake City pose for a photo together on the border between the United States and Canada at the start of their trip to the Mexican border as a fundraiser for the Semper Fi & America’s Fund.
Photo by Dean and Lorri Zenoni

On Thursday morning near Kremmling, a couple from Salt Lake City experienced the majesty of the Rocky Mountains on a 2,495 mile bike ride from the American-Canadian border to the southern border with Mexico.

Before retired U.S. Marine Corps Master Sgt.Dean Zenoni and his wife Lorri began their bike ride from Kremmling up and over Ute Pass and down to Summit County this week, capturing the stunning orange sunrise over low-hanging clouds and the beautiful Gore Range .

In the foreground stood the stars and stripes of the American flag. And Dean – a veteran of four tours in Iraq and missions in Somalia, Haiti, Cuba, Liberia and numerous other locations – was sure to greet Old Glory.

For the Zenonis, it was one of the most memorable moments 36 days after riding the Great Divide Mountain Bike Route from June 11th to August 11th to raise funds for the Semper Fi & America’s Fund. The fund is an experienced nonprofit charity that has contributed $ 246 million to more than 26,000 service members.

And Dean is one of them.

“On this drive you see all the farmhouses, all the homesteads along the country roads with pride, all flying the American flag,” said Dean. “At sunrise this morning we passed a ranch that had both the Marine Corps and the American flag. To see that this commitment from other Americans works for me. “

It hits Dean because, in his 24th year with the Marines, he suffered a cervical spine injury that ended his career after being knocked around in a military vehicle in Iraq.

The injury resulted in Dean having a herniated disc that required surgery and caused great pain as it damaged some of the nerves that led to Dean’s upper chest and triceps.

With the injuries, Dean looked for a way to relieve his pain and keep in touch with his service brothers. Through his connection to a wounded warrior battalion, Dean found the fund.

Unable to lift weights as he had enjoyed before an injury, Dean was introduced to cycling as a form of healing and therapy through the Fund. The now 51-year-old knew he was going to challenge him but not worsen his injuries. The Semper Fi & America’s Fund also helped Dean become a certified USA Cycling Trainer, and he used the GI Bill to attend a bicycle mechanic school.

“The fund was critical to my transition,” said Dean. “I was ready to do 30 years of service. Suddenly I wasn’t ready to be a civilian. “

More than a decade after joining the fund, Dean wanted a way to give back to the organization that was so instrumental in his recovery while improving his own health – hence his fundraising odyssey.

The Zenonis do the north-south bike tour on Trek 1120 hardtail mountain bikes with 3-inch tires. The back roads and trails of the Rocky Mountains are a far cry from the isolation at home that Dean experienced last fall, which he said motivated him to make the trip.

“I was a little stuck and depressed last fall and we had to get out of the house with all that COVID stuff,” he said. “So I was looking for something that we could do this summer that wouldn’t be affected by any of the COVID stuff. At the beginning of December we started buying the bikes. “

Lorri said she enjoyed seeing the sparsely populated back streets of Montana, Idaho, Wyoming, and now Colorado. Another favorite memory was climbing Gore Pass and descending into Radium north of Summit County to see Gore Canyon and the mighty Colorado River for the first time.

At 60 miles a day, the drive is tiring in places. And it will be like that again this weekend when the group drives through Hartsel and Salida after departing Summit County. However, the couple’s primary focus is on meeting their goal of $ 100,000 for the fund. Dean said he settled on this number after seeing other people raise small donations for 5 and 10 kilometer races.

“I haven’t counted how many ‘Ks’ were between Canada and Mexico, but there are a lot,” he said.

As of Friday, the couple was over $ 30,000, including promises to add additional donations later.

Time will tell how much they increase. At the moment Lorri is looking forward to enjoying the sights again while cycling.

“Our country is so beautiful,” she said. “We have some amazing backcountry areas to cycle through that we probably would never have seen.

“And on the other hand, we met great people along the way. We have matching jerseys – red, white and blue – for people to notice and people stop us and ask us what we are doing. And then when I get a signal and come into a city, I see that the page has been donated. Someone we just met that day after we stopped and talked to us donate? We’re just overwhelmed. “