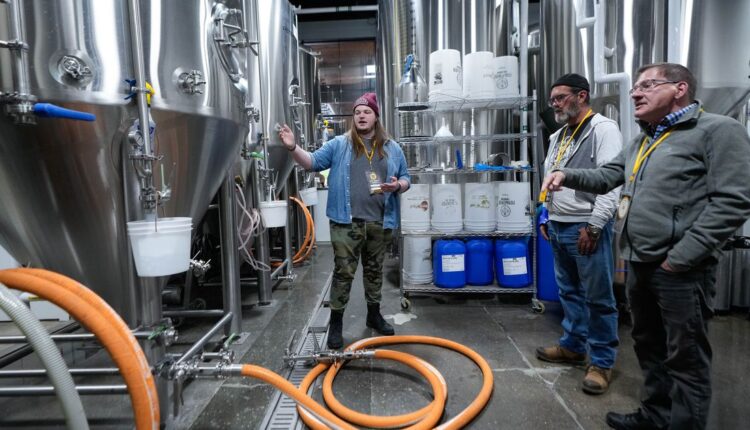 City Brew Tours lands in SLC, to teach you about Utah’s craft brews

(Francisco Kjolseth | The Salt Lake Tribune) City Brew Tours in Salt Lake guide Liam Bice, right, gives Dane Hofmann, left, and Charley Ellis a behind the scenes look at the process at Level Crossing Brewery on Saturday, April 30, 2022. The new educational beer tour takes folks around to local breweries to see the back end brewing process, sample beers and pair them with food.

Like any good tour guide, Isaac Bell entertains the travelers on his van with a pop quiz: What’s the oldest beer recipe?

“Anyone know what the punishment was for making bad beer?” Bell asks the folks on his van.

“You had to drink it,” jokes a member of the touring party.

They’re not wrong, Bell says: “They drowned you in your own bad beer. And I imagine you ended up drinking a little bit of it in the process.”

Bell’s company, City Brew Tours, launched in Salt Lake City last week, with the aim of helping people find good beers, and teaching them why they’re good, how they’re brewed, and how to drink them. (Yes, there is an art to drinking beer.)

The company — started in 2008 in Burlington, Vermont — runs tours in 16 cities. Salt Lake City and Portland, Oregon, have the company’s only tours west of the Great Plains.

The company’s founder, Chad Brodsky, called Salt Lake City ���a craft beer mecca.” Not because of volume — the city has a modest number of breweries compared to other cities its size — but because of the quality of the beers being made in Utah, he said.

The Utah breweries participating in the tours, which launched April 29, include Saltfire, Level Crossing, Uinta, Bewilder, and Hopkins — with more expected to join.

(Francisco Kjolseth | The Salt Lake Tribune) People enjoy samples of beers at Hopkins Brewery, the first stop of four on the City Brew Tour in Salt Lake City on Saturday, April 30, 2022. The tours, new educational beer tours that take folks around to local breweries to see the back end of the brewing process, sample beers and pair them with food.

The clear vs. the cloudy

When a recent tour arrived at Uinta Brewing, the half-dozen riders on the tour retired to the patio out back, where trays of beer samples were distributed up and down the table.

“This is the Golden Spike hefeweizen and the 801 Pilsner,” explained Bell, who’s from Washington, DC “This is their flagship pilsner. I know there was someone here who said they won’t drink a hef, but hey, it’s only four ounces. There’s enough craft beer in America — you don’t have to drink it.”

Bell started folks with the 801 — the lighter flavor profile — asking everyone to hold up their sample to the light to really look at the color and opacity.

“You’ll see that the hefeweizen looks very different from the pilsner,” Bell said. “What do you see?”

“Right!” Bell responded. “You can read a newspaper through it. When you look at a beer, look at the color, how much head it has on it.”

Bell then led the group through what he called “the drive by.”

“You’re going to smell that beer before you stick your nose into that glass,” he said. “You don’t want to shock your palate, right? Take the glass, waft it underneath your nose in a little circle. Get it right under there and just take a quick whiff. What do you smell? This probably has a kind of cereal sweetness.”

People with what perfumers call “the nose” might pick up on floral notes, he added, which come from the bitter hops used in traditional pilsners.

“Now you’re going to taste your beer, which most of you have already been doing,” Bell said drily. “It’s good to sort of slurp it a little bit, to activate that carbonation over your tongue, because you’re going to get different tastes on different portions of your tongue, depending on where it’s going. Give it a little slurp. What are you tasting when you drink your pilsner?”

Earthiness, one person said. That cereal sweetness. The bitterness of the hops. A grapefruit flavor.

Even the hefe hater decided to try the Golden Spike. Bell asked the group to hold it up to the light and look at its haziness, and then drink a sip of both beers, swishing it around to compare the different flavor and mouthfeel.

After sampling beers, Bell and co-tour leader Molly Sutter, who’s based out of Pittsburgh, led the group inside.

After making sure everyone put on safety glasses, Bell and Sutter walked the group into the back end of the brewery. Uinta, which is one of Utah’s oldest breweries, uses a custom-designed system from BrauKon, a Bavarian company known for its high-quality equipment, and has the capacity to brew on a large scale — as shown by the enormous sacks of barley and Ceiling-high skyscrapers of blank aluminum cans.

Bell led the group past brewing tanks, boil kettles, fermenters and conditioning tanks, explaining each part of the process and how it affects the color, flavor and finish of the beer.

Then it’s back into the van, to the next stop, Hopkins Brewing, where the tour saw brewing on a much smaller scale.

“So we’ve just come from a 130-barrel system, and now you’re going to see a seven-barrel system,” Bell said. “As you can see, it works a bit differently. They are super, hyper local here. Unlike where we just came from, the beers don’t really go out unless it’s in a growler. Everything they make here is made to be enjoyed here.”

After a quick tour of the basement brew system, the group sat down to beer flights and food, and Bell and Sutter walked them through a food pairing.

The flight included a pale ale, a gose, an IPA and a brown ale, which were served with a plate of salad, wings and cheese-smothered tater tots. Bell invited people to start by having a sip of beer, then a bite of food, then reverse the process to see how the taste changed.

“The way you introduce it to your palace is really important,” Bell said. “It will make it taste different. The second thing is, look for similarities, and look for contrasts. It’s really as simple as that. What does beer have? It can have sweetness from the malt. Bitterness from the hops. You can even get sourness from the beers, like your gose. … Try everything, see what works for you, though me, personally, I’d try the gose and have it with your salad.”

Ultimately, Bell told the group, he can explain how beer is brewed; he can describe different beer styles; he can explain flavor terms like yeasty, caramelized, malty, earthy, hoppy or fruity. The best teacher, though, is your own experience and your own senses.

A Guide to Help You Keep Up With the Omicron Subvariants