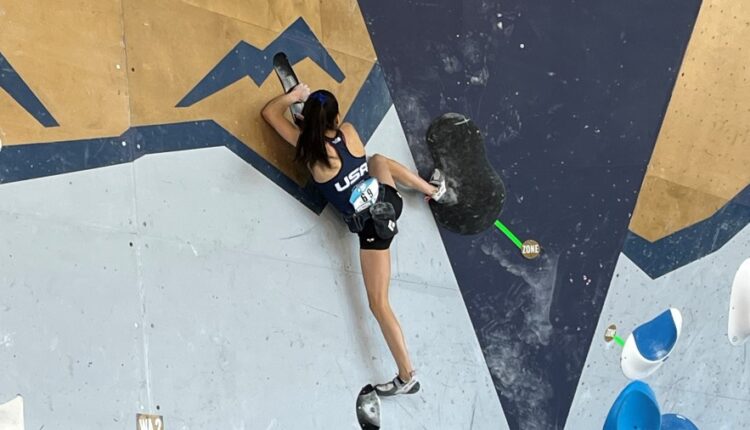 SALT LAKE CITY — It’s kind of like one big party.

People were outside eating and drinking in a park on a nice spring day.

However, for all the fun they were having at Pioneer Park in downtown Salt Lake City, the athletes they were cheering for were feeling the pressure.

An International Federal of Sport Climbing World Cup competition was being held at the park and Hunt was one of the Team USA climbers on the wall.

She knows if her dream of making the Paris 2024 Olympics USA Climbing Team is to come true, she has to do well at big events like these.

“Ever since I was little, I’ve liked the Olympics,” said Hunt. “I was never drawn to the other sports like I am climbing, and something about speed climbing, it’s just addicting.”

Climbing is now an Olympic sport after debuting in the Tokyo Games last year.

USA Climbing is based in downtown Salt Lake City after moving from Colorado a few years ago.

It’s the perfect time for Salt Lake to be at the forefront of the sport’s popularity.

Decent crowd at Pioneer Park today to watch @ifsclimbing World Cup climbing. Some of the @USAClimbing Olympians from the Tokyo Games are competing. Salt Lake is the only city that isn’t in Europe or Asia hosting World Cup climbing this season. pic.twitter.com/AJMZqexPFC

“We came with a goal to make Salt Lake City the destination for climbing in the US, if not the world, and I think this shows we’re doing just that with the back-to-back World Cups yet again this year, and a Para-climbing World Cup in-between those two events,” said USA Climbing CEO Marc Norman.

This year, World Cup climbing events are being held in Europe and Asia for the most part, except for two events in Salt Lake City this weekend and next weekend.

Many of the US climbers train at Salt Lake City, so it’s a nice break from all the travel.

“It’s pretty exciting,” said US climber Natalia Grossman. “I live like 10-15 minutes away from here, so I’m excited to just share this weekend with all my friends and family.”

It also gives the US team a little bit of a home-field advantage, which Grossman remembers when they won two World Cups last year in Salt Lake City.

“I wouldn’t have performed as well without the crowd,” she said.

It’s further proof Salt Lake City supports its sports, especially Olympic sports, as the city looks to host another Winter Games in 2030 or 2034.