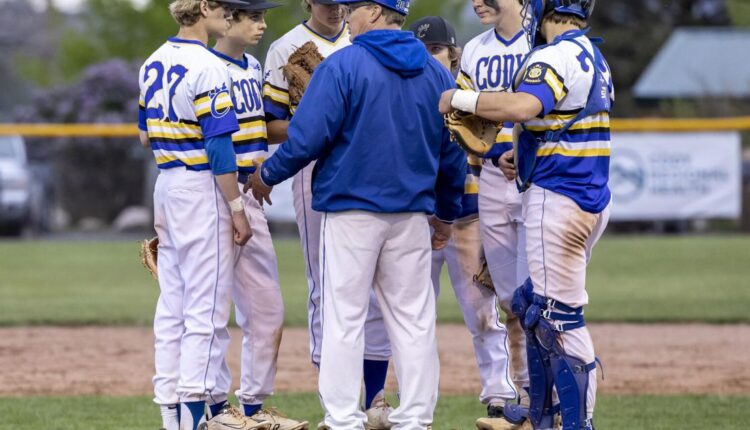 The Cody Cubs dropped their second consecutive game in as many days on Saturday morning 8-5, this time to the Ridgeline Wolverines at the 2022 regional single “A” tournament in Vernal, Utah.

The loss eliminated the Cubs from the tournament.

The Cubs took the lead in the top of the second inning after a Jace Jarrett grounder scored Wyatt Carlson and Jayvin McAlmond, and Ben Reinker singled in Jarrett to make it 3-0 Cody.

Ridgeline scored seven unanswered runs in the next three innings, however, got up 7-3

Jarrett and Reinker had back-to-back singles in the top of the sixth, and a Jack Schroeder base hit scored both of them to draw the Cubs to within 7-5, but the Wolverines added another run in the bottom of the sixth to walk away with the 8-5 win.

Dominic Phillips and Trey Schroeder had two of Cody’s eight hits on the day.

Trey Schroeder took the loss on the hill for the Cubs. He went 3 1/3 innings giving up nine hits and seven runs, four of those earned.

Phillips had a solid outing in relief of Trey Schroeder. He went 2 2/3 innings giving up a hit and a run while striking out four.

The Cody Cubs fell behind early and couldn’t recover in the opening game of the 2022 single “A” regional tournament in Vernal, Utah, on Friday morning.

The Storm led 4-0 in the bottom of the third before Jack Schroeder connected on a two-run home run that scored Ben Reinker after he singled.

Cody tallied five hits on the day including a double by Wyatt Carlson and singles by Jace Jarrett, Ty Peterson and Reinker.

Schroeder took the loss on the mound for Cody going 6 1/3 innings giving up 15 hits, seven earned runs and striking out a batter.

The Cubs will look to battle their way back through the loser’s bracket tomorrow morning when they face the loser of the Casper/Ridgeline (Millville, Utah) at 10 am