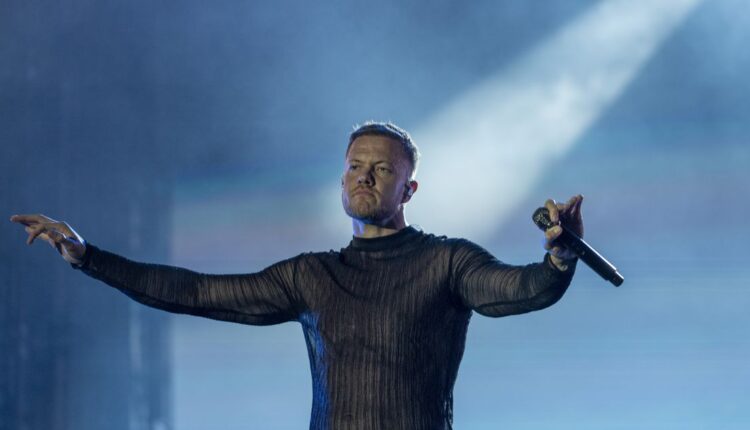 Dan Reynolds, the frontman of Imagine Dragons, confessed to the crowd at Salt Lake City’s Rice-Eccles Stadium that he had a sinus infection — and that he woke up stressed about it Friday, worried about being able to perform on the first stop of the North American leg of the band’s world tour.

But, he added, he felt confident that the band’s Utah fans — who have been with Imagine Dragons since the beginning — would be able to sing with him, and for him, when needed.

It was an emotional opening to an emotional show, the first of 20 performances on this leg of the Grammy-winning pop-rock band’s Mercury World Tour. And when Imagine Dragons opened with “Younger,” a song off his newest album, “Mercury — Act 2,” accompanied by fireworks, it made a statement that it was going to be one hell of a show.

At any concert, there are maybe a handful of moments where audience members feel completely immersed in the show, whether it be from connection to the music itself or the surrounding atmosphere. Imagine Dragons’ show Friday was so immersive, the entire concert was that moment.

The set list was a good mix of the band’s established hits and cuts off of 2021’s “Mercy — Act 1″ and this year’s “Mercy — Act 2.” Songs like “Younger” and the classic “Radioactive” were accompanied with pyrotechnics. Confetti cannons went off five times. Wrist bands given to the audience were synchronized, and lt up with every song. Reynolds sometimes left the stage to go down into the crowd, interacting with fans and small children.

All of this stagecraft combined to let every person in the stadium — from the pit to the back rows — feel like they were an important part of the show, crucial to its success. The crowd was on its feet from the moment the band took the stage until the last chord of the final song vibrated through the breeze.

• Reynolds introduced “It’s Time,” the band’s first hit single, by recalling how he wrote the song in his dorm room at Brigham Young University. He held a pride flag while he sang the song, which has become an anthem for LGBTQ+ people, with the line in the chorus, “I’m never changing who I am.”

• Reynolds dedicated the song “Demons,” another early single, to “anyone with heavy depression and anxiety” and implored them to remember “you are not alone” and “your life is always worth living.”

• He dedicated the song “Believer” to Ukraine, and took a moment to speak against the Russian invasion there.

• For the song “On Top of the World,” large multi-color balloons were tossed around the pit, bobbing through the air like beach balls.

• A series of short videos guided the show, a narrative journey of the “Mercury” album — which Reynolds, choking up, said was “to celebrate those we have lost and to hope for something more.”

Being the first show of this leg of the tour, there were some opening-night glitches. Some fans were caught short by the stadium’s strict, and apparently last-minute, bag policy — forcing them to either take their purses back to their cars or check their bags. And there was the sudden jolt of pouring rain just before the Dragons took the stage, sending people running for cover or, if they were prepared, putting on their rain ponchos and jackets. (The stage crew diligently worked to clear water off the long walkway stage.)

Even those moments had their upside: Between sets, to pass the time and perhaps to keep spirits up, the audience across the stadium did The Wave, keeping it going for several rounds before Imagine Dragons took the stage.

Opening the show for Imagine Dragons were pop artist Kings Elliot — who some fans missed because of the delays getting into the stadium — and hip-hop artist Macklemore.

During his energetic 40-minute opening set, Macklemore and his band — all color-coordinated in green — played his iconic hits, like “Thrift Shop,” “Same Love,” and “White Walls,” as well as a new song, “Manic.” At some points, Macklemore even hosed the pit down by squeezing out water from a spray tube. Before he left, Macklemore promised a new album next time he comes back to Utah.

Imagine Dragons fans in Utah are sometimes treated as a punchline, told that they don’t have “real” musical taste (whatever that may be). In Friday night’s show, the band proved what fans have appreciated since their first album, “Night Visions” — that Imagine Dragons make good, immersive music that anyone can connect to.

Like the young girl in the stands, dressed in an oversized Mercury World Tour shirt, dancing in the aisle and head-banging to the guitar solos. Or the older man in front of her, swaying back and forth and belting lyrics like nothing else in the world mattered in that moment.

More than a decade after their start in Utah clubs, Imagine Dragons continue to deliver for their fans, putting together a welcoming, brilliant environment. The first show of the Mercury World Tour was a triumph, and shows what it means to attend a concert in 2022.