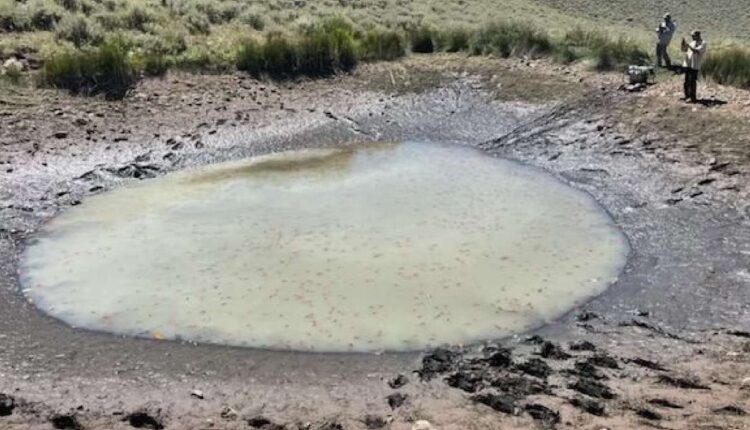 A photo of a pond at the Mail Draw Wildlife Management Area in Daggett County. Utah wildlife biologists found hundreds of goldfish in the pond on Aug. 29. (Utah Division of Wildlife Resources)

State wildlife officials are reminding people to not illegally dump fish into ponds after wildlife officials found hundreds of goldfish in a wildlife management pond in the Uinta Mountains last week — and exotic fish at other ponds in the state earlier this year.

Biologists with the Utah Division of Wildlife Resources came across the goldfish on Aug. 29 during a routine survey at a pond within the Mail Draw Wildlife Management Area, located between Flaming Gorge and Dinosaur National Monument in northeast Utah. State wildlife officials note that the pond isn’t even used for fishing, it’s used to provide water for wildlife in the area.

But it’s not even the agency’s strangest discovery this year. Biologists stumbled across an oscar fish, a species native to South America, during another survey at Millrace Park Pond in Taylorsville. They also recently found “a variety of other exotic fish” in multiple other Salt Lake Valley ponds.

These examples tack onto the “countless” number of times biologists have found aquarium fish illegally dumped into ponds, streams or lakes across the state, and that’s a problem, says Randy Oplinger, the division’s sportfish coordinator. Illegal fish dumping can add species that prey on and outcompete native or endangered species or sportfish, introduce diseases in bodies of water and worsen water quality in the body of water they are dumped in.

“Illegal fish introductions seldom improve fisheries — instead, illegal introductions typically ruin fisheries and threaten the species that live there,” he said, in a statement. “It is also illegal in Utah and can result in a class A misdemeanor.”

While most cases have involved community ponds, the division notes there have been at least a half-dozen illegal dumping cases at reservoirs over the past two decades. The most recent of those came when biologists found yellow perch, bluegill and green sunfish at Kolob Reservoir in southern Utah four years ago. The three species “wreaked havoc on the fishery,” resulting in the division using rotenone that year to clear out all the fish in the reservoir, division officials said.

Oplinger said every one of these environmental restoration projects is “very expensive and takes a long time,” which is why people should not dump a fish into a body of water. Division officials add that it’s not just aquarium fish that are a problem, people should also not move fish from one Utah body of water to another.