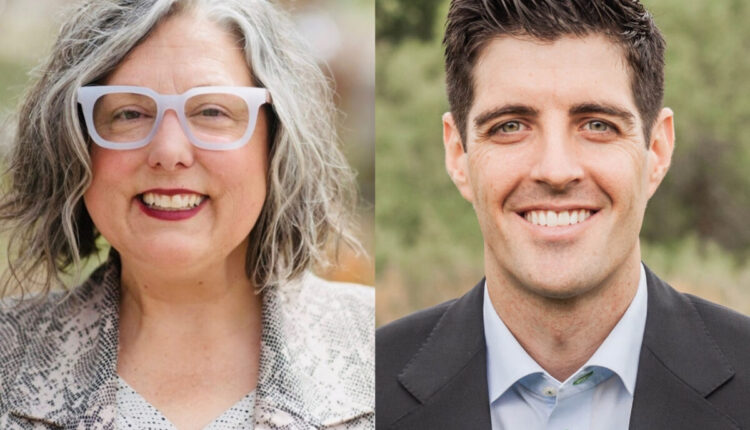 District 8 in the Utah House, shown in orange, covers the East Bench and north-central areas of Ogden, northern North Ogden, the Ogden Valley and eastern Weber County, plus a portion of Morgan County.

OGDEN — Whoever wins this election cycle, a new representative will be serving Ogden’s East Bench area and the Ogden Valley in the Utah House.

Inflation and taxes are big concerns for Kyle, who unsuccessfully vied for the District 8 spot in 2018. He’s from Huntsville and, with a degree in chemical engineering, works in production management in the medical sector.

“The aftershock of the pandemic and the failed policies in Washington are squeezing people’s finances and affecting the everyday lives of individuals, families and seniors on fixed incomes. We need to provide tax relief and make life more affordable for Utahns,” he said in an emailed response to queries sent by the Standard-Examiner.

In discussing what she considers the big issues, Hall, seeking public office for the first time, alluded to feedback she’s received from District 8 residents while campaigning. The concerns of District 8 voters revolve around women’s rights, particularly their reproductive rights, and gun violence, she said. Water conservation and air quality rank high as well.

District 8 in the Utah House, shown in orange, covers the East Bench and north-central areas of Ogden, northern North Ogden, the Ogden Valley and eastern Weber County, plus a portion of Morgan County.

Hall previously served as minister of Trinity Presbyterian Church in Ogden, where she lives, and now serves as executive presbyter for the Presbytery of Wyoming, which represents 28 Presbyterian churches in the state.

In campaigning leading up to the Utah Republican Party convention last April, Kyle had positioned himself to the right of Waldrip, a moderate GOPer. He expressed a strong pro-life stance and support for medical privacy, including opposition to vaccine mandates. He also said he backed the state measure passed earlier this year, House Bill 11, that bans participation by transgender athletes in girls high school sports.

In his responses to the Standard Examiner, he staked out a more moderate position, pulling back from controversial issues and putting a focus on taxes. Kyle ultimately faced off against Kimberly Cozzens in the GOP primary last June, defeating her handily.

He’s someone “who will communicate and work with others to solve problems. I’m a Republican, but no political party has a monopoly on good ideas,” Kyle said. “I’ll work across the political spectrum to help lower taxes, improve the quality of life for Utahns and protect our freedoms and natural resources for the next generation.”

Hall, too, positioned herself moderately.

“I’m running as a Democrat, but I’m a pretty reasonable, sensitive person,” she said. “Do I think poor and homeless have needs to be dealt with? Absolutely. I don’t think that’s an extreme issue.”

Several Republican friends are supporters, she went on, “because they know I will be a fair legislator.”

While Kyle has described himself as pro-life, Hall put herself in the pro-choice camp. Abortion, long a hot issue, has received increased attention since the June US Supreme Court ruling that struck down Roe v. Wade, giving states authority to set policy on the matter.

“I am a firm believer in freedom and personal choice when it comes to reproductive health,” she said. “To me, that’s what a conservative stance is. You don’t tell someone what to do, you don’t overreach.”

Gun ownership is common in the West, Hall said, but there ought to be limits. Many have brought up the gun issue as she’s campaigned. “For me, weapons of war — those need to be regulated just because we don’t need weapons of war, automatic rifles, on the streets,” she said.

In his responses to the Standard Examiner, Kyle put the most emphasis on keeping taxes in check.

“I will focus on easing the tax burden on individuals, families, seniors on fixed incomes and small businesses. For example, I want to decrease the tax on groceries and gas to help working families and those on a fixed income,” Kyle said. Eliminating the 1.75% sales tax on groceries has been a focus of debate in Salt Lake City, pushed by District 10 Rep. Rosemary Lesser, to an Ogden Democrat, though it hasn’t yet gained traction among the body as a whole.

He also noted the state’s $1.4 billion surplus in revenue, saying income taxes need to be scrutinized. “I would also like to explore an income tax cut for middle-class families,” Kyle said.

More generally, he put a focus on listening. “I have knocked on thousands of doors and responded to every call and email from District 8 voters. A good representative should have a pulse on the district, and I’ve done the work to do just that,” he said.

“I’ll work hard to ensure every Utahn is able to have food on the table and can afford to see a doctor. I’ll stand up and demand we take positive steps to make our air and water cleaner for our future generations,” Hall said in camaign video.

Kyle referencd his professional background. “I believe my unique background in business and chemical engineering will help us bring prosperity to our community and tackle important environmental and natural resource issues such as the shrinking Great Salt Lake,” he said.

KHN’s ‘What the Health?’: Finally Fixing the ‘Family Glitch’