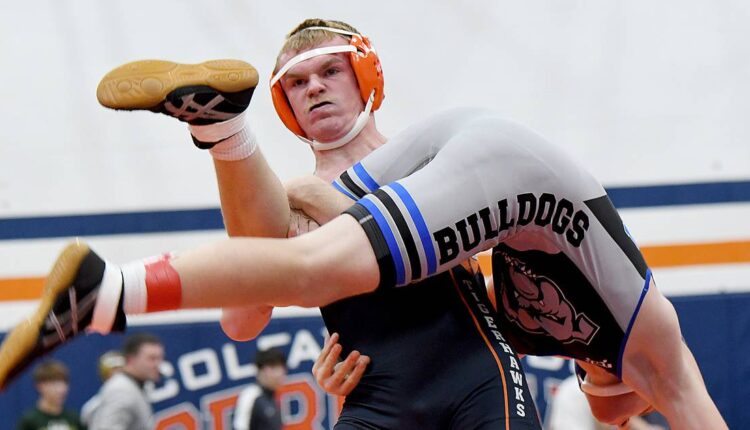 DES MOINES — Colfax-Mingo’s wrestling team got into the win column for the first time this season on Thursday.

The Tigerhawks were 11-13 in contested matches but took 11 forfeits in the three duals.

Colfax-Mingo was 4-4 in contested matches during a 48-30 win over Roland story. There was one double forfeit in the bout and CM had a 4-1 advantage in forfeits.

Colfax-Mingo senior John McGill, top, won all three of his matches by fall during a home quadrangular on Tuesday. None of the three matches went into the second round. (Troy Hyde/Newton News)

In the 40-27 win over host Saydel, CM was 4-4 in contested bouts and it took three forfeits. There were two double forfeits and the Eagles took a forfeit.

Colfax-Mingo scored a narrow 42-36 win over South Hamilton but was 3-5 in contested matches. Rodriguez, Buenrostro, Wilkins, and Teagan Dybevik all took forfeits, while Fitch, McGill, and Isaiah Baucom all won by fall.

Colfax-Mingo junior Austin Lane, top, scored a 39-second pin during the team’s home quadrangular on Tuesday and then got his hand raised twice during a road quad on Thursday. (Troy Hyde/Newton News)

COLFAX — McGill won three times by fall, but the rest of the Tigerhawks struggled during a home quadrangular on Tuesday.

Colfax-Mingo finished 7-23 in contested matches against Ogden, Woodward-Granger and Perry.

McGill and Dybevik both scored pins against Woodward-Granger and McGill won by fall and Rodriguez took a forfeit in the loss to Perry.

In the loss to Ogden, CM was 4-5 in contested matches and the Bulldogs were handed three forfeits. McGill and Lane both won by fall and Isaiah Baucom and Seth Brant won by decisions. Baucom won 4-3 and Brant claimed a back-and-forth battle 11-9.

Colfax-Mingo sophomore Isaiah Baucom, top, went 3-0 during the team’s road quadrangular on Thursday in Des Moines. He also got a win at home against Ogden on Tuesday. (Troy Hyde/Newton News)