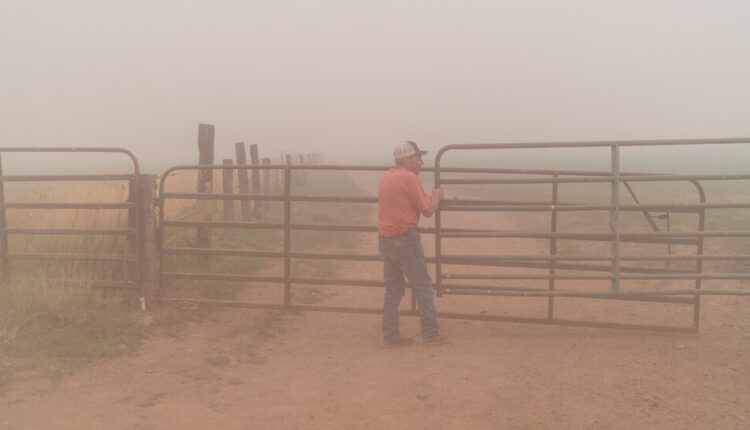 Dixie Fire in California is felt outside of state lines

TAYLORSVILLE, California – Captured by an astronaut’s camera, the Dixie Fire appears as a thick and obnoxious miasm pouring from the surface of the earth. At its center in the eastern mountains of California, the fire devours acres and acres of rugged wilderness and becomes the second largest fire in the state’s history.

But Dixie and other mega-fires in the west have left a much larger footprint than the evergreen forests they level and the cities they decimate.

California, a world leader in the fight against air pollution from vehicles, sends huge clouds of mist full of noxious particles through the country summer after summer. Even as far as Denver, 1,100 miles east, the fire helped create a puff of poisonous smoke during an already scorching summer.

Forest fires – exacerbated by drought and climate change – are the largest source of potentially deadly air pollution in California. And in recent weeks, the accumulating haze and smoke from the California fires and high ozone levels have made the air in Salt Lake City and Denver some of the dirtiest in the world, more harmful than that of Delhi or Beijing in recent days.

Smoke from forest fires in western Canada, Oregon, and California has stained the skies and polluted the air as far as Iowa, Minnesota, and even New York City. Recent research suggests that as it ages, chemical changes, and impacts across the country, the smoke can become more toxic and react with sunlight and other molecules suspended in the air. Over time, smoke can form reactive compounds that can be particularly harmful to the body if inhaled.

“It gets worse as you get older,” said Mary Prunicki, director of air pollution and health research at Stanford University’s Sean N. Parker Center for Asthma and Allergy Research.

Air quality got so bad in Utah last week that several schools decided to cancel exercise and outdoor activities. Provo High School canceled a game on Friday night. Summer camps in Washington state have been suspended or canceled.

27 days after igniting, the Dixie fire has still not claimed any lives, despite injuring three firefighters and destroying 433 homes and businesses. What sets the Dixie Fire apart from the mega fires of previous years is the vast area it tore in the mountains northeast of the state capital, Sacramento. With 489,287 hectares of fire burned, the fire is still only 21 percent contained.

And the exhausted firefighters battling the Dixie Fire in and around the gold rush towns are warning that the smoke and fire season could grasp the drought-stricken west for months to come.

“I have no doubt it’s just getting started,” said Matt Sanders, a fire chief.

In the remote mountain communities of Plumas County, a sparsely populated county near the Nevada border, there is suffocating smoke in the air. There is no electricity, and in some places water is scarce for both extinguishing and drinking. Local residents who have chosen not to evacuate collect meat and food from their neighbors’ refrigerators. Others are isolated, awaiting deliveries of food, medicine and gas from the community’s firefighters.

One family said they tried to evacuate but were forced to return to their property. “My father has dementia and when we leave the area he just wants to come home,” says Jack Cunningham, who looks after his parents at their home in the woods near Taylorsville. His mother needs oxygen, which is powered by a generator.

“We tested her to see how long she could go without oxygen, right now it’s about 30 minutes,” said Mr. Cunningham’s sister Dena Cunningham, adding that her plan in case they need to be evacuated was this Bring two portable oxygen tanks with you, each lasting 45 minutes.

In the areas that have already been ravaged by fire, it is eerily quiet in the woods. Every now and then a burned tree cracks and falls. Stunned deer wander through the rubble. People sleep in caravans in parking lots, dazed by displacement.

Around Taylorsville, a closely-knit community, people have been preparing for the fire for weeks, helping each other with bulldozing ditches, building irrigation pipes and spraying houses. Many ranchers have packed their most precious belongings and stored them in cattle trailers in irrigated fields, hoping they will be safe when the fire comes from the mountains. Human days revolve around tracking every movement of the fire. The sounds of generators fill the air.

The huge clouds of smoke that the fires emit rise like a giant funnel into the atmosphere and drift east. Data from the California Air Resources Board shows that forest fires are the largest source of the tiny air pollution particles known as PM 2.5, which can cause lung and heart disease. Last year’s fires produced a hundred times as many of these particles as cars in the state.

As the smoke crosses the continent, it brings fear for parents, the elderly, and those with respiratory diseases.

In the rural Utah town of Vernal, Heidi Pilling spent Monday morning keeping an eye on the 29 children at her Little Peeps daycare as they played at the sandpit.

Six of the children have asthma – as does Ms. Pilling – and she said days of unhealthy air stung their eyes and throats, making it difficult to take deep breaths. They typically like to spend two to three hours outside on sunny summer days, but Ms. Pilling had to devise fallback plans like indoor yoga and dance parties for the proliferating days when the air just feels too toxic to breathe long.

“If you react badly, we’ll go in,” she said on Monday. “Today is the worst that has ever been. It’s just gray, gray, gray. “

Kirk Chambers, the head coach of the Provo High School Bulldogs soccer team, said he decided to skip last Friday’s game after smoke billowed over Utah against the Wasatch Mountains and the color-coded air quality dials on his phone went from orange to red sickly purple. “If you were only in there for half an hour, you felt really bad,” he said. This is what the reality of a smoky summer looks like more and more: discarded games, students with asthma who cannot play safely and at the last minute a scramble for indoor fields to practice on.

Forest fire smoke is one of the more dangerous air pollutants – a storm of burned trees, house paint and house insulation, chemicals, and more – and has the power to send people with asthma attacks, strokes, and heart attacks to the emergency room far off the lines of fire, researchers said.

“We care a lot about particles in the atmosphere because they kill people and send people to hospital with serious illnesses,” said Anthony Wexler, director of the Air Quality Research Center at the University of California, Davis.

In the long term, smoke particles could also inhibit the growth of children’s lungs.

But the full effects of such large forest fires are still being discovered, said Professor Wexler.

“We don’t understand the full impact,” he said. “It used to be unprecedented and now it’s annual.”

On Sunday morning, Taylorsville residents who had met for a communal breakfast at the fire station said they felt like they were living in some sort of purgatory as they waited to see if the fire would reach them and suffered from suffocation in the meantime Effects of the haze.

“I breathe a lot of smoke,” said Lee Newbill, 65, a rancher who drove up to the station in his pickup truck. “I’ve never smoked in my entire life,” he added. “I’ll make it up to you now.”

Annie Correal contributed to the coverage.

In Lebanon, Discontent Grows With Hezbollah’s Political, Military Might | Voice of America