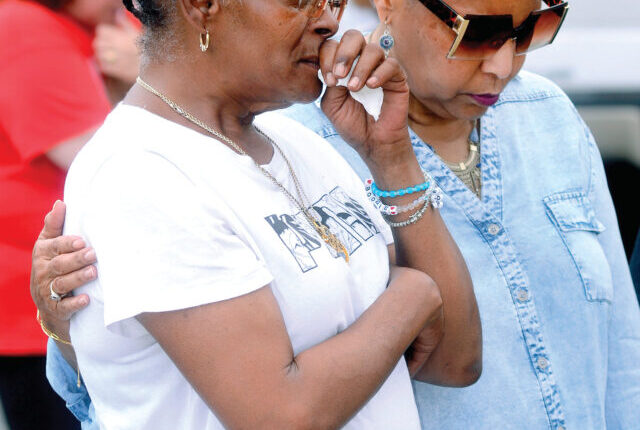 Lajena Solomon of Youngstown, left, is comforted by Marguerite Douglas of Youngstown during the “Stop The Violence” prayer rally Saturday afternoon at the corner of Market St. and Avondale Ave. on Youngstown’s southside…Solomon’s 14 yr. old son Landon Lockhart was murdered in January 2022 on the eastside of Youngstown…by R. Michael Semple

YOUNGSTOWN — The root causes of violence carry tentacles that stretch in many directions, yet simple steps can be taken to prevent its spread, a longtime community and civil rights activist contends.

“Our focus is on the idea that most physical violence is preceded by verbal violence,” Penny Wells, Mahoning Valley Sojourn to the Past’s executive director, said. “Most people don’t just start killing people; most violence is not random.”

Hate-filled, derogatory and violent language and racist views easily can be precursors for violence that often can escalate, said Wells, who was among about 60 clergy members, community leaders, elected officials, law-enforcement personnel and others who attended Saturday’s Stop the Violence news conference and prayer rally kickoff to tackle the spate of gun crimes that have plagued the city.

The gathering took place across the street from the Shell gas station at Market Street and Avondale Avenue on the South Side, to which police responded more than 300 times last year.

Last month, police answered a call in which video captured two men, 19 and 22, standing next to a car when shots rang out. One of the men is shown falling as he runs away.

Lekeila Houser, 21, a Mahoning Valley STTP member who is an intervention specialist at Youngstown Community School, noted that violence often is multigenerational, as some parents teach and pass it to their children. She has occasionally seen the dynamic play out at her school, which necessitates the importance of holding parenting classes, she explained.

“Violence is learned and is taught, and it needs to stop,” Houser said, adding that it’s critical for kids and their parents to learn the philosophy and techniques of nonviolence espoused by people such as Dr. Martin Luther King Jr. and the late Georgia congressman and civil rights icon John Lewis.

The approach is to engage in prayer and fasting this summer for peace in the city; encourage churches to place the campaign message of “stop the violence” on their marquees or in their yards beginning June 1; schedule weekend marches and prayer walks in targeted areas of Youngstown; seek the assistance of those related to the perpetrators of violence to initiate mediation sessions; train mentors for young people to help them avoid a lifestyle of violence and assist those desiring to get out of the culture of violence; and provide resources, support and training for parents who wish to steer their children from that way of life.

Senseless violence creates a ripple effect, from family members left in turmoil to entire neighborhoods to people’s altered sense of safety to children growing up in such a culture, said Rosie Taylor, president of the local Interdenominational Ministerial Alliance.

“We stand today in solidarity against the violence plaguing our city,” Ted Brown of the Mahoning Valley Association of Churches, said. “Street justice is not the solution.”

Calling the violence “a pandemic,” Brown urged those who hear or see anything suspicious to at least contact a clergy member if they feel uncomfortable dealing with police.

City Councilwoman Anita Davis, D-6th Ward, said she wants to see the Shell station shut down because of the ongoing problems there. Davis, a former Youngstown police officer, took issue with those who refer to perpetrators of violence as “misguided.”

Police Chief Carl Davis said that during his 18-month tenure, he’s visited numerous police chiefs in cities across the country, most of which also have been plagued by gun violence.

Part of the problem stems from abusive police practices, which fosters distrust between law enforcement and communities they serve and can lead to protests — especially after high-profile police killings such as that of George Floyd in Minneapolis. Some officers become offended by mass protests, which often results in a decrease in proactive policing, Davis explained.

The Youngstown Police Department uses the latest technology that includes body cameras, but the most valuable tool is people with information coming forward to help curb the problem, he continued.

Mayor Jamael Tito Brown said he remembers when many residents used to sit on their front porches and act as the eyes and ears of their neighborhoods, which had a chilling effect on crime.

Also in the crowd were Sisters Natalie Stucki and Jenny Ruppe of Ogden and Vernal, Utah, respectively, who are in the Mahoning Valley as part of a mission trip on behalf of the Church of Jesus Christ of Latter-day Saints.

Stucki and Ruppe said they have been teaching “spiritual CPR” (church, prayer and reading Scripture) as a means to bring healing to people’s hearts. Their goals also include trying to unite families and helping others connect to God, they explained.

Another attendee was Tiffany Black of Youngstown, who distributed flyers seeking information about the disappearance of her brother, Malcolm Myers, 31, who was last seen April 10 near Pasadena Avenue in Youngstown. He was wearing a tan windbreaker trimmed in black, a white T-shirt and a black prayer necklace.

The rally, which was live-streamed, culminated with a series of prayers for families affected by violence to receive justice, safety in the city’s neighborhoods, unity in the community, people impacted by suicide and those who commit the violent acts.