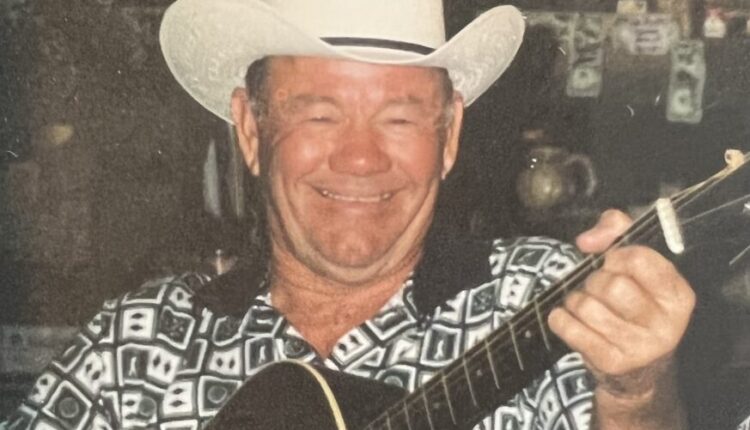 Dwayne Lee Watkins SR passed away peacefully in his home on March 17th, just 14 days shy of his 84th birthday. Dwayne “Dunk” known to his friends was a kindhearted, quiet soul. Dwayne was born to Emmitt and Hazel Watkins on March 31, 1938, he grew up in Seminole Texas on the family farm. He along with his 2 brothers and 2 sisters learned to work hard, and love hard. They had genuine southern roots which taught them to be respectful and to take care of each other.

Dwayne was an incredible guitar player, he loved to sit and strum to all those who would visit, his go-to was “You Are My Sunshine”. He was an avid golfer, whether playing or watching it on TV. He loved having a beer with his best buddies, Butch and Dave, and telling stories. Fishing and bowling were also a few of his many hobbies. Bowling is where he earned his nickname “Dunk”. He was a southpaw with giant hands, a huge reach, and a gentle heart. He loved to sit and hold babies for hours and just study them, he adored his grandchildren.

Dwayne met the love of his life, Nedra Sue Williamson, in San Francisco on a Merry Go Round, of all places, while she was attending school and him in the Navy. They were married later that year and together they had three handsome, rowdy boys Lee, Guy, and Cort. They had many adventures together including several road trips to Texas to see family. Dwayne and Nedra were later divorced.

Dwayne worked for Ogden City for 30 plus years doing various jobs including the backhoe operator. Dwayne was the guy who would come in the middle of the night to dig up broken pipes and fix whatever needed to be fixed. When Dwayne retired, you could find him on the golf course every day, he loved the outdoors and sunshine.

A few years ago Dwayne and his son Cort rented a motorhome and made the long trek back to Texas, it truly was one of the highlights of his life. Dwayne had such a special place for each family member there and was very grateful to be able to see all of them one last time.

Dwayne was preceded in death by his oldest son, Dwayne Lee Watkins Jr., his parents Emmitt and Hazel, brothers Jack and Strick, and sister Wilda.

A special thanks to Dr. Stellter and team, Mitzy, his home nurse of 5 years, Tyler, his Physical Therapist, Becky, and the Hospice team…and all who went above and beyond in their care for Dwayne.

Dwayne will be truly missed by so many. He was quiet, but always made you feel loved, he had a positive attitude right until the end and a great smile! We love you dad, forever and always.

Utah man argued, yelled at wife before running her over, documents say

Who Doesn’t Text in 2022? Most State Medicaid Programs